Once Upon A Time - Season 4, Episode 19 Recap: De Vil Brings The Dark - And It's Delicious, Darling 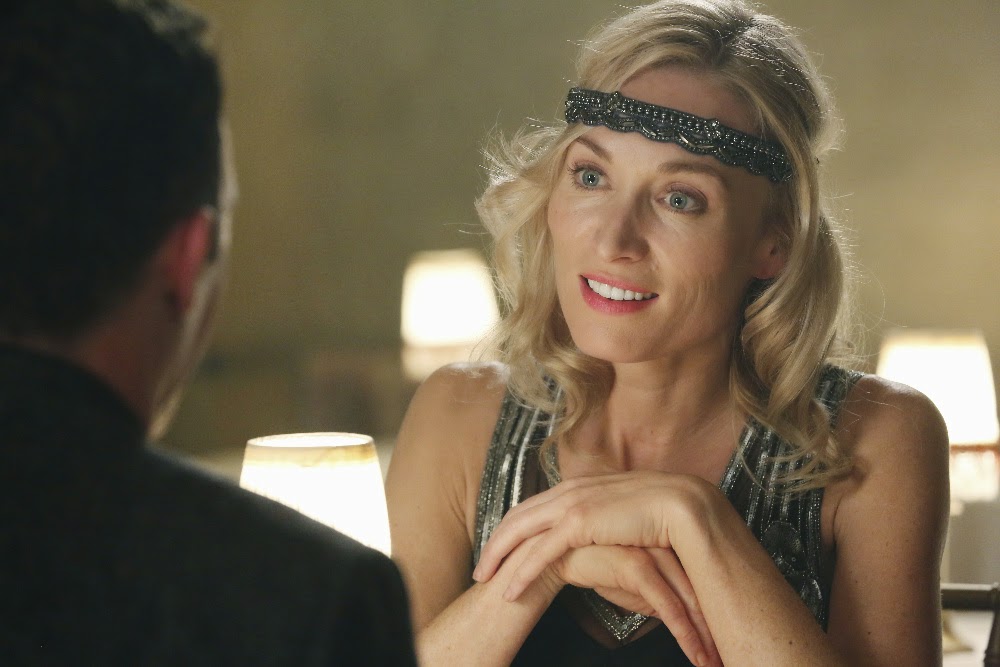 We begin this evening's tale with a flashback to a young girl being chased through the woods by dalmatians - this is Cruella. Apparently Mommy is  more like Mumsy Dearest (they're big on Mommy issues in this show), who has great influence over her beloved dogs. Mumsy locks Cruella in the attic without the benefit of an incestuous family, and poor little Cruella (and really, who names their kid Cruella?") is sad and alone, and now thoroughly warped.

And now in present-day Storybrooke, we see just how far the damage has gone. Maleficent confronts Cruella, wanting to know what happened after Cru and Ursula landed in our world with baby Lily. Cru confesses without a shred of remorse that while it was very nice that the magic from the dragon egg helped her stay young (nice retcon, writers), she up and left baby Lily to die in the woods without a backwards glance. Maleficent turns into a dragon and Cruella is easily able to use her gin breath and persuade her to take a nap, remarking that people "Always underestimate a girl in diamonds and furs."

Meanwhile, back at the apartment, Emma is still bitchin' at the folks. Snow defends herself again because she's good, dammit! Regina walks in and lets them all know that Zelena is still alive and she's going to NYC to rescue Robin.

And where the hell is baby Neal? They've obviously just come in from being out, and no one is there, babysitting Neal. If he's at someone's house, why didn't they drop by and get him? Or at least call to check on him (especially since you just learned that the nutcase that snatched him from your arms is still hanging around)? I think Emma's right - the Charmings are less-than-stellar parental role models.

Regina decides to go to see Belle, who offers to help her with Gold, who is presently grilling the author in the cabin. The man introduces himself as Isaac, and he claims he's never met Cruella. Gold is suddenly called away, pretty much in mid-conversation. This must be important.

It turns out that Belle is at the wishing well, and she wants to know why Gold is really here. He pulls out his shriveled, darkened lump of a heart.


He's only got a tiny flicker of light within it, and when that goes out, he loses all his ability to love. Belle tells him she might have thrown the chipped teacup out too soon, and they embrace, seeming to reconcile. Then she turns on Rumple, telling him Will is a better kisser. What???


She even goes so far as to call him pathetic. This is not the Belle we know and love, and there's a reason for that - Regina has Belle's heart, and she threatens to kill her if Rumple doesn't help her find Robin. Ooooooooh. Oh, I do love some cold and evil Regina. Of course, I can't help but think that she got Belle's heart voluntarily, but ya never know.

Cruella shows up at the cabin and calls the writer by name - so he does know her! She demands that he give back what he took from her. And apparently, she's not able to hurt him, either.
"You will pay for what you did when you made me what I am," she threatens.
"Idle threats don't make for good drama," he retorts.
She reminds him that he's being held by Rumple, and that won't end well.
"Enjoy the upper hand while it's still on your wrist," she snaps (nice!) and makes her exit.

There are some really, really good lines in this episode. It more than makes up for anyone unsavioring a savior.

Flash back to an unspecified place that looks like 1930's New York or maybe London (hard to tell when accents come into play) and a now adult Cruella, who's begging Mummy dearest to let her leave the attic. Isaac the author appears at the front door. He's a newspaper reporter here to interview Mumsy about her 'near-magical' abilities with dogs.

Mumsy has had three husbands, all now deceased, and she's prickly as a cactus and refuses to talk. She throws Isaac out, but Cruella appears in the window, telling him she'll give him a great story if he'll just rescue her. 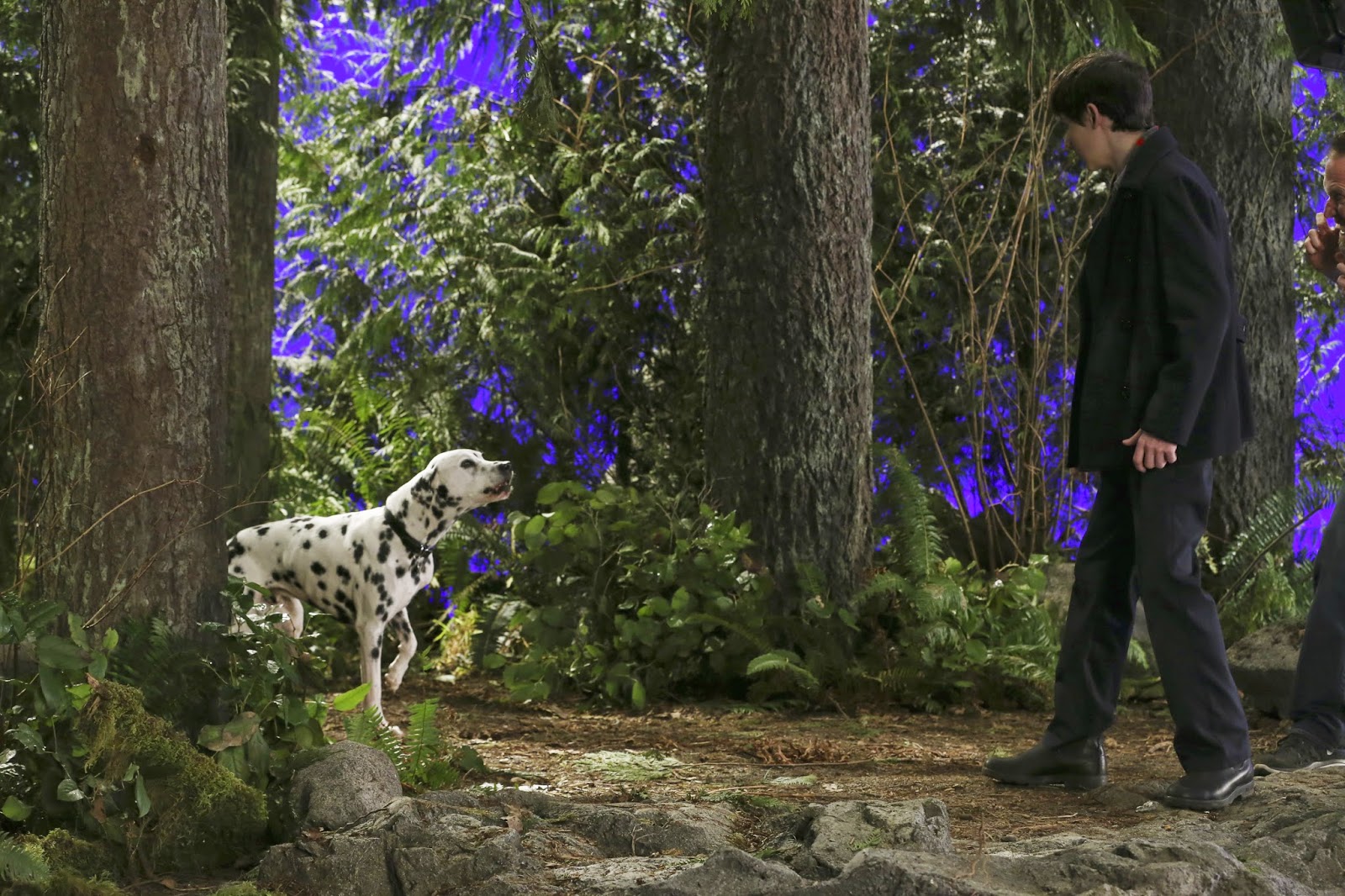 Meanwhile, out in the woods, Pongo shows up to take Henry to where little Timmy is trapped in the well Cruella, who tells him to get in the car. Pongo growls, and since he's at 'nad level, Henry complies.

Flashing back again, the author frees Cruella by somehow tossing her the key to her attic prison, She tells him that she's willing to talk, but she wants to go somewhere loud and fun. He jets her off to a speakeasy where the costumer has really outdone himself again. Gatsby's got nothin' on Castro - and Cru gets her first taste of gin.

She lets Isaac in on her sensatoinal story - Mumsy poisons her husbands. He's loving it, and calls it a "Cinderella tale with a black widow twist." He's reluctant to put his pen down, but Cru convinces him to dance with her and live instead of recording life for a change.

Forward to Storybrooke, and Emma questions whether Regina can handle Zelena. She gives her a gun to take with her to NY. Then both their phones suddenly beep with identical ringtones and Emma remarks out loud how quirky it is that they both got an incoming video message (guess that's a thing now!). It's Henry, letting them both know that Cruella has him. She wants them to kill the author in return for Henry's life.

Over in the cabin, Gold knows that Cruella and Isaac lied about their past. The author claims he didn't mention it because he didn't think it was relevant. Gold's been watching Cru through the magic crystal ball. Cru's happy ending is the author's death, apparently, and whatever he did to her is preventing her from having it.

Back at the speakeasy, Cru is thanking Isaac for a wonderful night, and he shows her his pen. He confesses his links to magic and his work as "an author." It turns out the speakeasy exists in a place "out of time," which conveniently gives us the fuzzy continuity we need on the timeline.

The pen and ink are magic, and give Isaac the power to change people's life stories. He proves it by writing Cruella a beautiful necklace and earrings.

She reaches for the pen, and he warns her about the dangers of spilling the ink. He offers to give her magic, and to whisk her away somewhere, just the two of them. She says she has to face Mumsy first. He offers to go with her, but she tells him this is something she must do alone. He gives her the keys to the iconic car, telling her it's hers now.

Ahead in Storybrooke, our heroes split up. The Charmings have a lead on where to find the author, and Emma heads out with Regina and Killian to comb the woods for Henry (and there's an awesome moment where we get to see Cruella playing Angry Birds for some serious LOL).

Snow offers to come with them, but with Henry's life on the line, Emma tells her (in a really bitchy way) that "she needs to be around people she trusts, and right now - that's not you." Ouch.


Regina tells Emma to get the hell over it already. Emma replies with tonight's winning line:

"Forgive me if I don't take advice from a woman who held a grudge for half her life because a ten year old couldn't keep a secret."

Killian - who is looking simultaneously hot and wet - agrees that there needs to be forgiveness here.

"Even heroes make mistakes, love," he reminds her. Oh, steamy, sultry, tender-hearted Killian. I miss you.

They hear Henry crying out and take off, and Killian and Regina are hearing it from two different directions. Regina gets a great snappy line: "Has cannon fire damaged your hearing?" Before they all split up. Regina and Killian discover that Gold used conch shells to broadcast Henry's voice and separate Emma from them. Emma finds Cruella, who's got a gun pointed at Henry's chest.

Back in the land out of time, Mumsy is confronting the author. It turns out Cruella is the real evil here. She killed all of Mumsy's husbands. She used trumpet flowers to poison dad, and worse - she liked watching him die. Mumsy's been trying to fix her but to no avail. She warns him again to stay away - Cruella takes the things you care about and destroys them.

He's crushed and disbelieving - apparently, he was starting to fall for Cru - but he's spooked enough to double-check his pen case. And of course, Cruella has taken the pen. She confronts Mumsy, and turns the dalmations on her, commanding them to kill. Ewww. Grisly.

The author goes back to find her, and she's sewing herself a dalmatian skin coat. She turns to thank him for giving her the means to watch Mommy die in a really horrible way. She's such a psychopath - it's delicious really - reveling in her darkness. They both make a dive for the pen and ink, which spills on Cruella, giving her the trademark mane. She tries to shoot him, but it's too late - he's written it so that she can never kill anyone again.

Forward to present day in the cabin, and the Charmings go after the author. Oooh, David, gettin' all manly and body slamming the dude. I'm tingly!


The author tells them that Gold has set Emma up to turn dark. He tells them the truth - Henry's in no danger. Cruella can't kill Henry. If Emma kills her, she'll be killing a defenseless woman.

[A defenseless woman who's a known psychopath and Emma would be killing in defense of the son she loves more than life itself, but that's not the point]

Emma doesn't know that Cruella is harmless, of course - and as Cruella threatens Henry, Emma uses her magic like a badass to poof her off the cliff.


Emma kills her dead, dead, dead and it leaves her looking like she needs some 24-hour Claritan. 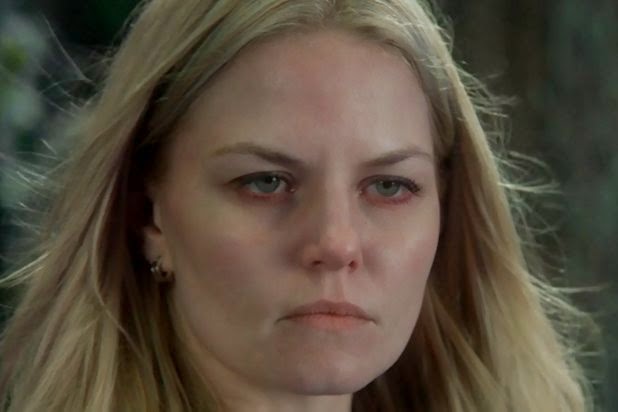 I'm going to give this episode five poisoned quills out of five.

Finally, a return to our storytelling roots - and a splash of the darkness that turns these pasty, bland happily-ever-afters into the meaty stuff we mongrels crave. I kind of hope Cruella isn't really dead - I loved her that much. No redemption for this villain, no how, no way. She makes Rumple look like a misbehaving toddler by comparison.