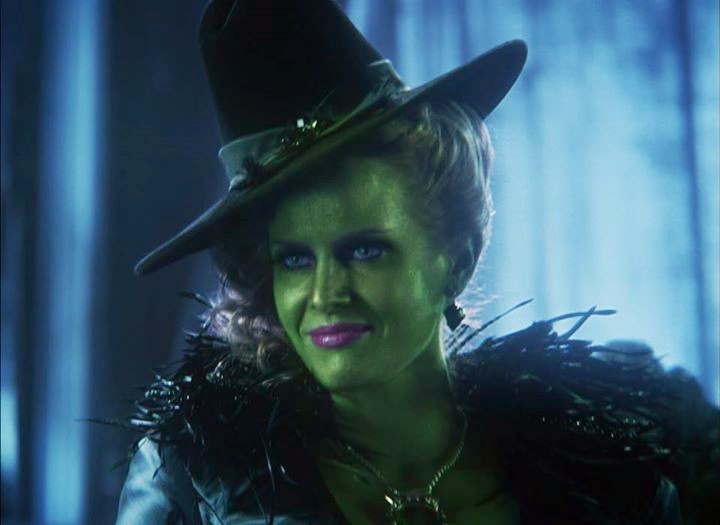 We begin tonight's tale in Storybrooke, where the Charmings and Emma are looking for The Author in the deep, dark woods. Emma's still pissed about the whole "Trading her soul for the soul of an innocent" thing and is frankly tired of her parent's shit.

"But we changed!" Snow whines. Yeah, Snow, we know. We all know. And it hasn't been for the better this season. I'm tired of your shit, too.

A few dozen yards away, the author is trying to make his own pen from a tree branch - apparently magic quills can be sculpted from the wood of Enchanted Trees (even though he was clearly using a feather quill when last we saw him - hello continuity) and there's a lack of those in Storybrooke. Rumple shows up with a prickly, "Remember me?" And the author replies with the winning line of tonight's episode:

Rumple tells the author he's going to write them all whole bunch of new happy endings, and the guy looks at him kinda like this:

So Rumple poofs him away to Regina's vault, where Rumple has Regina tied up - which somehow completely negates her magic because apparently, it's only in her hands. He's got some intel on Robin, and uses it to threaten Regina into helping him. He hands Regina a post-it with Robin's number on it and tells her to call.

Back in time nine weeks (oh, finally, we've got some time perspective) to the day Robin left, and we see the Hood family in New York City. Regina gave Robin the keys to Neal's old apartment which is magically untouched by meth-heads after being abandoned for years, and Marian somehow strangely knows all about Baelfire. Hrrrmmm.

Anyway, Marian sets her purse down on the sidewalk in the middle of New York City and somebody steals it. Robin gives chase on horseback, managing to untack a horse from a handsome cab in under thirty seconds. He runs the thief down proclaiming that a thief who'll steal from those in need has no honor.

And on that line, we return to the Enchanted Forest "Many years ago..." (which is writer code for "eff it, we don't want to figure it out) and we see Robin in a tavern, telling Little John that he's done with thievery. He's a married man and a bartender now. And there's the Sheriff of Nottingham - with a haircut. How did I miss that he's a prime piece of manflesh?

Yum. Anyway, Robin's taxes are overdue, and if he doesn't pay in two days, the sheriff expects Marian as payment.

Back in Neal's apartment, Marian is whining about how this crappy new life is all her fault. Robin asks her if she remembers what she said to him their first day as outlaws and she replies with a vague, "I said so many things..."

And in walks Rumple, who is clearly confused as to why they are living in his dead son's magical rent-free, tax-free, impermeable-to-crackheads New York apartment. Robin knows that Rumple is trying to find the author, and Rumple reminds him that the author will be able to supply Regina's happy ending as well. Then he collapses on the floor.

Back in the Enchanted Forest, it's late night at the tavern and Rumple has apparently been drinking, because he saunters into Robin's bar talking like a cockney chimney sweep. He tells Robin that he needs a thief to steal "The Elixir of the Wounded Heart."

"That's a ridiculously self-explanatory name" Robin replies (and I nearly chose that for winning line - well done, writers!). The elixir can be found in a land called Oz. In return for stealing it, all of Robin's money woes will be over.

Forward to New York where Robin is looking at his smartphone which features a pic of Regina as wallpaper even though he's married and vowed to try to work it out with Marian. Rumple has had a heart attack due to 'heart poisoning' from all his dark and dirty ways. Back in Storybrooke he could stave off the effects with magic, but without the magic, he's sunk. 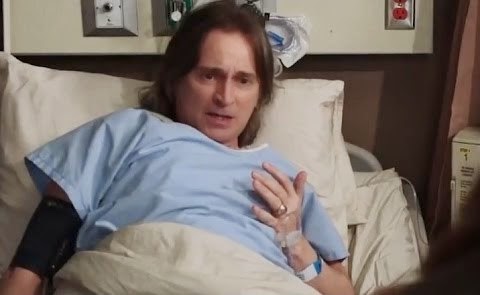 We have no idea why 28 years without magic didn't trash his heart before, but oh well. He knows where some of the Elixir of the Wounded Heart conveniently exists in New York and he wants Robin to get it for him because he's a "man with a code."

Flashing back to Oz, Robin takes out a guard upon arrival, saving the life of one Will Scarlet, who is bloody adorable. Can someone please give him something more to do than fill in? Pretty please? He asks Robin to steal some of the potion for him, and in return he'll keep the guard busy.

Robin dons the guard's ridiculous uniform and breaks into the castle, only to be caught by Zelena. He finds a bow and manages to get away, but with only one bottle. He lies to Will, claiming that he failed.

The elixir is hidden at the furniture store of Emma's former winged simian fiancé, Walsh, aptly named "The Wizard of Oak." Robin manages to trip the alarm (ya might have warned him, Rumple) but he manages to find the elixir and get away just as the cops show up. This is where I lose my suspension of disbelief. There's no way the cops get there that fast. Not in the real world. And there were four of them. Please.

When Robin gets home, Marian is pissed that he almost got killed. He tells her he can't just turn his back on Rumple and she replies with "Perhaps you should consider the greater good and let him die." Robin looks confused (and as many have pointed out - he does that a lot) and says, "That's not the Marian I know." Hrrrmmmm....

Over at the hospital where Rumple is recuperating, Robin gives Rumple the elixir in return for the magical apartment, then takes his leave. Rumple drinks up, but it doesn't work. And in walks....Marian? Who has apparently switched the elixir because she's....ZELENA!!!!!

Am I good? Or am I good? I CALLED IT. I FREAKING CALLED IT. Zelena!!! I have shouted it out in my fanfics and across every OUAT forum since the season three finale - despite the naysayers that told me I was an idiot. I knew Marian was Zelena all along!!!

Damn, I'm good. Excuse me as I strut.

Rumple gets Zelena monologuing, and she confesses exactly what I said all along - she pretended to be Marian, who she conveniently killed, (thereby freeing up our beloved outlaw so he can be with our formerly evil Queen) just to eff with her sister's happy ending.

She taunts Rumple into another heart attack and sends him flat-lining. As the hospital crew rushes in she pretends to be distraught, all while grinning like an evil loon over their shoulders.

Damn. I have to say I hated this character. I hated her arc. I hated all of the last half of season three except for that finale (which was spectacular). But now?

Oh, I love Zelena. Nicely played, Bex Mader. Nicely played. Zelena is the craziest of crazy ex-girlfriends. She's the best big bad of them all. You can't fight crazy. Crazy will eff you up. 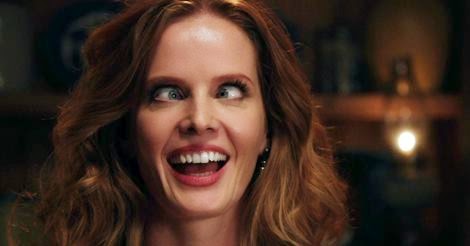 Okay, Rumple didn't die, but he is intubated and unable to protest as Zelena monologues some more. She confesses that she's tried to win Robin's heart but has had no luck because he still loves Regina. She reminds Rumple that he's the Dark One - or "The deathly pale one" (another great line!) and if the likes of him can get a happy ending, then she wants one, too. She makes a deal with Rumple - the elixir to heal his heart for her chance at the author.

Once Rumple is released (and looking like crap), Robin brings a box of Neal's things from the apartment. (And he brings them in a hatbox, which makes me wonder what's in there and how they're going to use it at a later date...) Rumple refuses them, telling Robin how they remind him of his failures. Robin opens up (because he and Rumple are now besties, I guess) and has a heart to heart about how Marian is like a stranger to him. Rumple urges him to start over with Marian and work toward his happiness. If he loved her once he can love her again.

Back in Oz, Will walks Robin to the door/portal, thanking him for trying. He explains that his sister died and he's so damn brokenhearted over it - that's what he wanted the elixir for (from what I understand having read the wiki on Wonderland because I can't watch it anywhere, he needed it to recover from a broken heart over his true love). Robin bids him goodbye and steps through the curtained portal, and Will pulls the elixir from his own pocket with a smile. 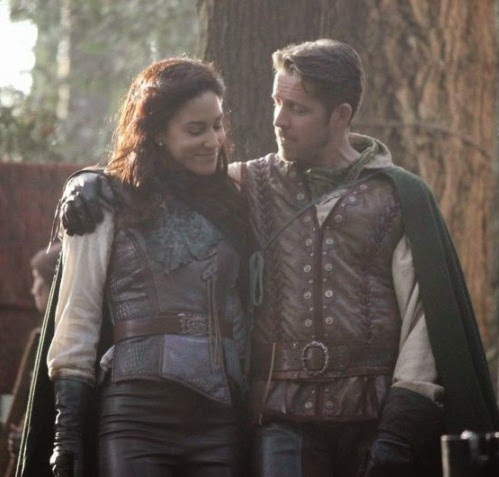 The following day in the tavern, the Sheriff has shown up to collect his due, only to face the Merry Men. Robin announces that he's now going to steal from the rich and give to the poor. He and Marian share an adorable moment and he reveals that he has the infamous six leaf clover of Oz - it can transform you into anyone you want to be, so thieving should be easy as hell from here on out.

Back in NYC, Robin is taking a shower.

Since the camera refuses to pan lower, we head into the living room where Marian/Zelena has found Robin's phone and she's playing upset and guilting the hell out of him. She tells him he needs to make a choice. Robin says she was once his happy ending but he's lost sight of that. He should take this miracle for what it is. He deletes Regina's picture and he starts macking on her while Roland looks on.

Later, Regina calls Robin only to have Zelena answer, letting her know that Robin is cheerfully sampling her meat loaf. Regina hangs up, fuming and distraught. Rumple explains that all it'll take is one phone call, and Zelena will kill Robin, unless Regina helps him get the author. Regina tells him she won't trade Emma for his evil goals and he takes the phone back, preparing to dial. We close on Regina's tortured face, and the decision she has to make hangs in the air.

Whew! I'm going to give this one five evil green apples out of five - despite a complete lack of Killian Jones - just because it completely vindicated me.

And if any of you assholes want to buy me a congratulatory drink, feel free. Because I know my damn characters.