God Help The Person Who Marries My Sleep-Screaming Daughter 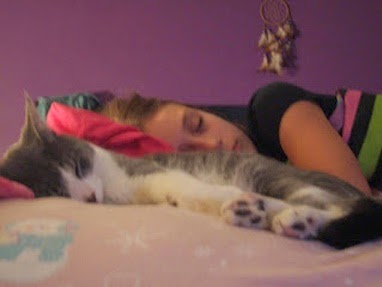 My daughter has never been a peaceful sleeper. Don't let that picture fool you, folks. That was taken during a nap, when she sleeps nice and soundly. Nighttime is a whole different ballgame.

It started when she was two months shy of two years old. Night terrors. Every night, starting around 10:30 and continuing to the magical time of 3:30 am - once she got past 3:30, we were okay. But during that five hour period, she woke at 20-25 minute intervals, screaming uncontrollably, eyes wide open but vacant, and I'd have to rush in, sooth her, rock her, and lay her back down. Then I'd go back to bed, just get comfortable, and it would start all over again.

Did I mention I was pregnant with her brother? And my husband slept like the dead? Then when David came along and I was up nursing him in between her shrieking (and getting up at 6am to go work my full time job), things got...ugly. I call that year "The Lost Year," because I honestly remember very little of it.

We examined and rearranged her diet. We eliminated artificial everything. We tried different bedtimes and bedtime routines, white noise and lavender baths. None of it did a thing for her. I finally took her to the pediatrician, who listened carefully, handed me some printouts and said, "She'll grow out of it, most likely. If it's any consolation, Night Terrors are usually the sign of a very intelligent child. Her brain just doesn't shut off."


He was right about her. But it honestly wasn't much consolation. She did grow out of the worst of it, and now she'll have a cycle of Night Terrors for a week or so every few months, and not with the frequency she had them before. Thank God.

In between that, however, she talks. She talks in her sleep and she talks a lot. All night long.

And when you're a mom who's always been a light sleeper, that's a problem. She doesn't mumble. She shouts. She argues. She laughs really loudly like a maniac. She'll even stare at you with wide-open eyes and have a full conversation, ending abruptly in mid-sentence before she lays back down like it never happened.

Her father had a slightly similar affliction, so I'm going to assume she got it from him. He never had night terrors, but every so often, he would sit up in bed in the middle of the night and say one complete sentence, perfectly enunciated, and then lay back down and start snoozing again. Some of my favorites of the ex-husband era:

"How did they ever survive?"

And my personal favorite, "Oh Jackie. You know I like that."

My name is not Jackie. And I sure didn't like that.

And now he's passed the ridiculous sleep conversation gene onto my daughter, who calmly walked into my bedroom at 12:30am this morning and told me she's getting ready for school. I realized immediately she was sleep-crazed and told her to go back to bed because it was 12:30. Her reply was "Yes. 12:30. That's when I go to school."

We argued a bit more, and she finally walked over to my side of the bed and said, "I'm sleeping here."

Okay by me, as long as we're sleeping. Then she told me she was getting up at 5am to take a shower. Right. Then she said something about cupcakes, but stopped in the middle and she was out.

One night I found her face-down and laughing hysterically. When I rolled her over, she said only "David Bowie" before she slid back into sleepyland.

She once woke me to tell me her toes were covered with fur. And she was screaming about pecans once. I don't know why. She doesn't even like pecans.

She asked me on one occasion if I knew where the door was. You know, the door to the box. The box with death in it.

Yeah, that'll keep you up at night.

So God help whoever marries this girl, because they're in for a wild, sleepless time on the overnight. And I'll be home, sleeping soundly with a smile on my face.

Email ThisBlogThis!Share to TwitterShare to FacebookShare to Pinterest
Labels: Anna