Tweeted Out Of My Self-Esteem

On Friday, I got this Tweeted in my direction: 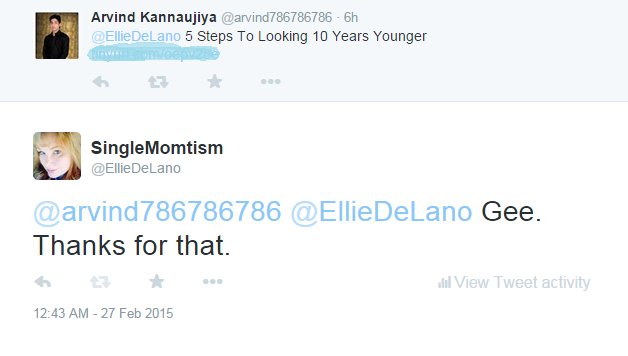 I don't know this guy. But that's okay. I don't know a lot of the people on the internet. (I know, it sounds crazy, but it's true!)

I pulled up his Twitter account and it appears that he sent this particular tweet to a lot of women. A whole lot of women. I didn't bother clicking the link – it's obvious he's trying to sell me something (and I'm even blurring it out here because he doesn't deserve the extra publicity).

It's not abnormal to have someone try to sell me something on the internet. For some reason, though, this one bothered me.

I mean…why me? It's not like I advertise my age on Twitter. I don't make a state secret of it, but really, you'd have to page back through a helluva lot of tweets to find that information.

Which can only mean that he took one look at my profile picture and said "Damn! This woman needs to look ten years younger, STAT!"

(At least, that's what my overly-sensitive woman brain is telling me)

And to make it worse, I'd just changed my profile picture and I changed it because I thought I took a pretty damn good picture that day. Maybe not.

I find myself scrutinizing it way more than I should. Look at that line, just below my left eye. It is kind of prominent. No wonder he focused on me. That line is pretty much all I can see in that picture now.

So I pulled the picture up for one of my friends and said, "I changed my profile picture." She leaned in, looked at my monitor and said "Wow! Your eyes are really blue."

Which is exactly why I thought that was a reasonably good picture in the first place. And I let some hack from the internet whom I don't even know make me doubt everything about myself with one stupid little "let-me-sell-you-my-stuff" tweet.

Maybe I shouldn't call him a hack. Maybe he's better at his job than I give him credit for.

And I'm definitely better at being me – and looking like me – than I give myself credit for.