Once Upon A Time - Season 4, Episode 13 Recap: The Chick In The Shower Curtain Needs Some Pzazz

Ah, the great, squealing, dancing, unmitigated joy of a Once Upon A Time post-hiatus return episode!

Especially after the way we left: Rumple banished from town, Belle trying to walk back with this giant balls she grew swaying in the breeze, Emma doing shots with Regina when she should have been "celebrating" with Killian (and the quotation marks are a blatant reference to the fact that if a man kissed me like that, I'd have been feeling behind me for the doorknob to his room), and three new big baddies being courted by Rumple.
Oh, and there was some sort of goodbye to the blonde chick, Anna and this piece of wallpaper: 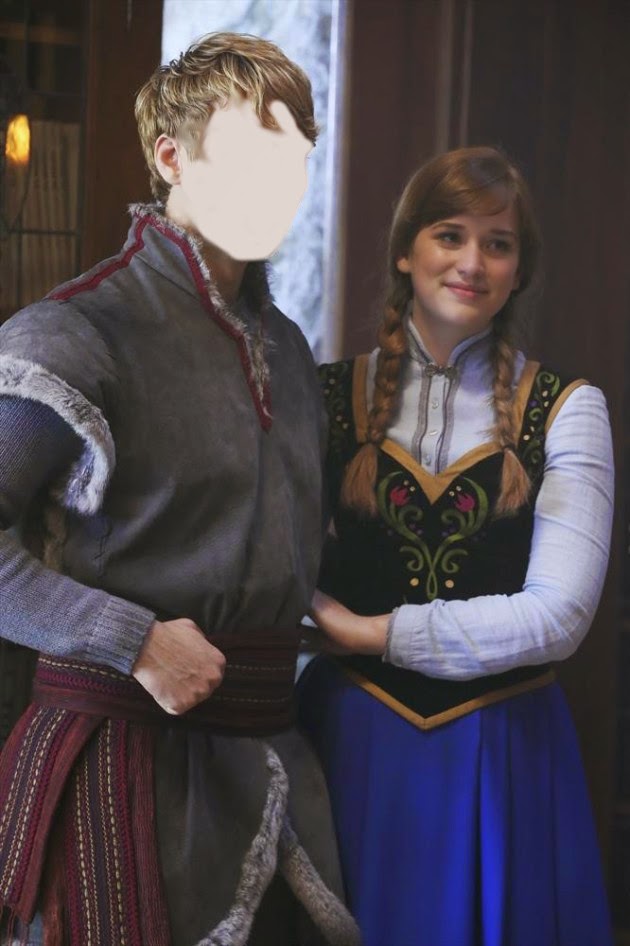 Anyway, we're back now, and we're in the Enchanted Forest, many moons ago, where our queens of darkness have their first meetup and we discover that Cruella's magical power is her overwhelming gin breath that apparently transfixes canines. Well. Alrighty, then.

It turns out the Rumple is the summoner, and he's looking for a happy ending.(That came out a lot dirtier than I meant it to sound.)

Back in Storybrooke, we see Regina loading Henry onto the town school bus for his two block drive to school, where Snow is back to teaching and back in some decent clothing. Regina's back in the mayor's office, and Emma's pinning on her sheriff's badge, grabbing coffee and kissing Killian. All's right with the world.

We move along to the library, where Belle and Killian are apparently teaming up to try and find a way to get the fairies out of the hat. Killian is filled with self-loathing and Belle comforts him by reminding him that they both lost a heart to Rumplestiltskin, prompting Killian to remind her that "as big a bastard as he was….he loved you." It was a surprisingly tender and heartfelt moment from the man who previously held a gun to her head and tried to kill her….twice.

Meanwhile in NYC, Rumple is in a frumpy robe and he's eating Ramen from a microwave while Ursula bitches in the background. The two of them head out to a mansion in Long Island to visit Cruella Feinberg, excuse me, De Ville. After a little persuasion, she's on board and they all climb into her iconic car for the trip to Storybrooke.

Back in the Enchanted Forest, the queens are hanging out with Rumple and so far, I have to point out that it's been the Cruella show for the most part. Maleficent is present, and Ursula (who was a serious force to be reckoned with in the animated world and brimming with personality) is giving Kristoff a run for his money and blends quite nicely into the scenery, despite her tentacles.

Flash forward to Storybrooke, where Rumple and 2/3 of the dark trio wait…in the drive through at Mr. Cluck's discussing their evil plan. Love it!

Emma, meanwhile, is bringing her new bestie lunch and oh, sassy Regina is back in full force.

Oh, how I've missed that snark. Emma discovers Regina's now-mended page from the book showing Regina and Robin together. It turns out the despite the fact that Regina saved his wife's life and loaded him up with money before he left, he couldn't be bothered to place a courtesy call. Nice.

Belle and Killian come running in (literally, running in) all aglow with the news that Belle has reached out to some of the finest minds in the world through her Radio Shack TRS-80 computer (she probably signed onto the internet three days ago and it just now connected) and she's gotten a professor at Oxford to translate an ancient spell that can free the fairies. Let's hear it for the library nerd!

Apparently, you have to use the dagger. And despite the getting of the translation for the incantation, Regina manages to open it without saying a freaking word. The fairies are now free. Unfortunately, she's also freed everything else in the hat, including the Chernebog, the demon from Fantasia that feeds on evil.

Cruella uses her gin breath on a bunch of really bad CGI bugs (call Brendan Fraser next time guys – he can show you how to CGI a bug), and then they move on to the wall of fire, forged from the breath of dragons. Maleficent is all over it, and then it's Ursula's turn to slide out a tentacle and snag some kind of weird bouncy-ball that he must've gotten from a machine at a grocery store.

Grabbing the ball sets of an Indiana Jones-style reaction, releasing the Chernebog, and Rumple wishes the ladies well as he slips away, leaving them to deal with it. Okay, now I'm not going to bust on them for their badly drawn bugs because the Chernebog looks awesome. Nicely done, graphics department!

Flashing forward to Storybrooke, we see Rumple on the edge of town with Cruella and Ursulump (still about as lifeless as a dead fish, but I do love her outfits) trying to find a way to cross the protection spell. The ladies decide Rumple's not the most trustworthy guy (Really? Ya think?) but after some more silver-tongued reassuring, they're back on his team.

Speaking of silver tongues, our brooding pirate is…brooding and Emma's trying to cheer him out of it, reassuring him that he' s not only a hero, but guaranteed to never be killed off the show, unlike previous hunks.

They all go to a big celebration at Granny's where Henry encourages Regina to talk to the Blue Fairy about their quest with the book. Blue lets us know that the sorcerer and the author are two different people – in other words, Blue knows a lot more than she's ever let anyone know, because she's Blue and creepily obtuse, the bitch.

Suddenly, we hear the Chernebog, and Regina flings out this show's winning line:

"I suppose we should go out and see what's killing property values this time."

Emma and Regina take on the Chernebog, managing to stun it while Belle, Killian and Snow look on.

Hey, where the hell is David? We haven't seen him all episode. Sadly, I just noticed that, which speaks a lot for how they've driven Prince Charming into the ground this season.

Ursula takes Rumple's cellphone and calls Regina, claiming that she and Cruella left Rumple in a dive bar and now they want to come to Storybrooke for redemption. Ursula lets Regina know that the Chernebog is looking for the darkest heart in town, so Regina and Emma hatch a plan to take the hell beast to the town line and somehow push it over, rendering it useless. Emma shares that plan via cellphone with Snow and David (oh, there he is!) who are visibly unhappy with the idea of Cruella and Ursula coming to town.

Snow and David rush to the town line, where Emma and Regina have foiled the Chernebog and Regina makes the decision to give Ursula and Cruella the Snow Queen's scroll, which will grant them access to the town. Snow and David tell them they might want to reconsider that and Emma openly questions why they would deny anyone a happy ending. They back down and relent, and Regina tosses out the scroll. The queens roll into town, and then go back for Rumple, who crosses the town line and becomes instantly fabulous.

It turns out Rumple is the Oxford professor who translated the spell for Belle, he's the one who got them to release the Chernebog, and surprise, surprise – it wasn't after Regina. It was looking for the heart that had the greatest potential for darkness, and it turns out that's Emma.

We end the episode with a clandestine meeting between Cruella, Ursula, Snow and David on a dark road on a rainy night. Snow tells the ladies they can stay in Storybrooke on one condition: They must never speak of what happened between them in the Enchanted Forest, especially not to Emma.

And in a parting shot, Snow throws out the biggest gobsmacker since we found out David used to have long hair and be a total wuss-puss:

Snow says if they talk, she'll rip out their damn hearts with her lily-white, bird-loving, schoolteacher hand.

Whoa. Damn you, writers. Now I have to wait till next week – or maybe even later – to find out what the hell they meant by that. And I also get a feeling you've got Killian brooding so hard over his wicked ways because Emma's going to give him a run for his money, forcing him to hero up and stop whining.

And the thought of a deliciously wicked Emma with a flirty, naughty pirate is making me all sorts of…warm. Is it warm in here?

Anyway, I'll give this episode four hooks out of five.

I'm not sure if I'm sold on the queens yet, but they haven't added Maleficent to the trio in Storybrooke as of yet, and she's hands-down my favorite. Cruella's just creepy and Ursula? What's up with Ursula? Give this girl some snappy lines, stat!
By Ellie DeLano - March 02, 2015