This Was One Of Those Weird Autism Mom Moments 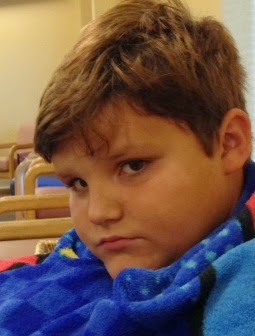 David has been a real exercise in parental patience lately.

He's always had a wonderful, sunshiney personality, and that hasn't changed. What has changed, however, is the level of testosterone flooding his system as he edges closer and closer to puberty. He's starting to get a soft furring on his upper lip, and his already broad shoulders are getting broader as his height climbs higher and higher. The voice hasn't dropped yet, but it's coming. Oh yes, it's all coming.

And along with that, come the mood swings. Having autism also means having poor impulse control, and when you add in a burst of testosterone-fueled rage to his difficulties with communication, you have a recipe for epic sibling fights and angry refusal of parental authority. He's argumentative, he's yelling a lot, and sometimes, he's punching and throwing people around. It's been a trial, but we're muddling through and the good times far outweigh the occasional outbursts.

Normally, when he's being corrected and facing the consequences of his bad behavior, he'll get very remorseful and spend the next few hours apologizing over and over, or hide in his room and sulk for a while.

This last weekend, he started doing something else. He started writing me letters.
Letters like this one:

They all have pretty much the same message: I'm sorry I was a jerk (or an idiot - words we never use to describe him, by the way), I shouldn't have ____ (stomped, yelled, hit). You don't want me, I'm going away, I hope there is a gift for you.

The first note he handed me, I read with wide eyes and passed over to Anna, who raised her eyebrows and looked as dumbfounded as me.

And this was one of those weird Autism Mom moments, where you have to decide which emotion you're feeling.

First, this is BIG. I mean, really, really big. David wrote a note. He hates, hates, hates having to write anything. He's never voluntarily written a note to anyone for any reason, ever. Never ever. And on top of that, he was actually, actively communicating his feelings to me. Using words.

Oh, you cannot know how enormous, I mean absolutely enormous it was that he was choosing to use his words.

And the terror - the bone-deep terror - that he actually will try to do that. I don't think he will, but he's impulsive and testosterone-fueled and I cannot ignore that he could do it. And if he did, he'd be completely vulnerable and utterly lost and I'd be insane until he was safe in my arms again.

So I had to sit him down, and I put him on my lap even though he's 115 pounds now. I held him tight and his sister and I reassured him that we love him, that we want him around and we will never not want that. We told him he's not a jerk or an idiot. We told him that while his behavior does make us angry or upset sometimes, we're still a family, and family loves each other no matter what.

I also made sure to praise him for choosing to communicate, for his writing skills, for thinking about his words and using them so well.

Then I took a few moments to make it clear that running away is a bad, bad thing to do. That it isn't safe, and he should always be safe. That his father and sister and me would be so sad and upset and worried if he ran away. That something bad could happen to him if he did, and we would never want anything bad to happen to him.

"But I said that I hope you have a gift," he replied, his eyes still wet with tears.

"A gift?" I wasn't sure how that figured in.

"If you get a gift, you will be happy again," he replied.

Ah. The light began to dawn when I began to think the way he thinks - a skill I have honed these years with autism.

"So even though you're upset with me, you want me to be happy?" I asked. He nodded.

"Me, too," I said. "I want you to be happy. Even when I'm upset with you." I pulled him in closer and I kissed his cheek, a big, sloppy wet kiss that made him laugh. "And you and your sister are the best gifts I ever got. You are a gift every day of my life."

He threw his arms around my neck and we held each other tight, and he stayed on my lap for forty minutes, until my legs went numb and he finally slid off to go play Mario Kart.

I looked at his sister and I let out a sigh. She smiled and shrugged and said, "Well. That's a new one."

Yes, it is. A thrilling and terrifying new one. And I'm still not sure how I feel about it.