Let's Talk About Teenage Girls For A Minute 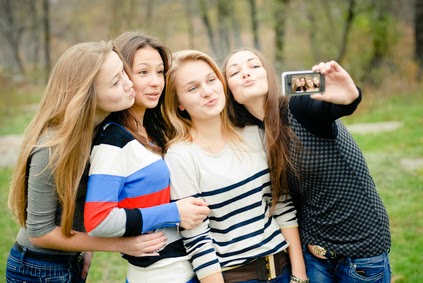 Hi there! Welcome to this week's edition of the Anna and Ellie minus Anna Show! This week's question:

Why in God's name did you think you could get your teen daughter to blog on a weekly basis?


So....yeah. The grand Anna and Ellie experiment has come to an end. Kudos to Anna, though. She lasted a few weeks longer than I thought she would.


I'm not saying that to slam my daughter in any way. I just know her. And folks, this just aint her thang. She doesn't like to blog. She doesn't like the questions. She thought this would be fun and it's honestly just boring for her. So I've allowed her to flit on to what she'd like to be doing with her time, and we'll just let this one go.

I've learned as a mother that you have to know when to let stuff go.

When she was seven, she still didn't know how to ride a two-wheel bike. All of her friends had lost their training wheels when they were five, maybe six tops. She tried it without a few times, but when she couldn't immediately figure it out and ride like the wind, she walked away from it.

Cheerleading was great for awhile. But the problem was, she liked being a cheerleader and being known as a cheerleader, but the practice? Not so much. The getting up early for games on a Saturday or Sunday? Definitely not so much.

She thought about joining math club. I even found a way that we could get her to and from via a rotating circle of Moms that I'd have to be constantly juggling, but it would be worth it so she could do math club. Then she thought it over, and she doesn't want to do math club. They do a lot of dumb drills and quizzes and stuff before they go to competitions and that's just really boring, mom.

She'd really like to learn to do martial arts. She's got a very strong body, and I'd love to put both her and her brother into a program. They could even spar together - what the hell, they beat on each other all the time anyway. But alas, that's a "no." She wants to do it, but she doesn't want to have to learn all that bowing and the drills and stuff to get to the point where you're really doing it.

Do you see a pattern, here?

She wants to do things, but she doesn't want to do the work, the practice, the drills to make you really good at what you do. Tedium for her is a fate worse than death, and she's off to find the next thing rather than stay and slug it through and figure it out and become even better at whatever it is she wants to do.

I've had the "you get good when you practice," "Nothing in life comes easy," "You have to put the work in and it's worth it when you do," talks over and over ad nauseam, with no effect other than a shrieking, angry teen girl telling me to leave her alone and let her decide for herself what she wants to do with her life.

And so, I do. As long as the grades are good (and they are), as long as she's not holing up like a hermit and has friends and valuable socialization with others, as long as she's eating and sleeping and treating people like human beings most of the time, I'm willing to back off, and let her find her way.

I won't stop urging her toward those other things. I won't stop suggesting. And she knows that next year, the start of her high school years, she stops getting a pass on school activities and her father and I have made it clear she must join at least one extracurricular, whether that's a sports team or the Spanish club, because these things help round out your college applications, which we're only a scant few years from filling out.

What we don't tell her is how much being involved with a group working toward a common goal will help her - in school, in life, in friendships and camaraderie. She won't want to hear it.

It may take a few tries before she finds her place, her motivation, her inspiration. And that's okay. She's young. She's got time.

She's Anna, wholly wonderful and entirely unique, and someday, she's going to kick down doors and take the world by storm. I have faith in that, and in her.