It's All About The Stuff. It Really, Really Is. 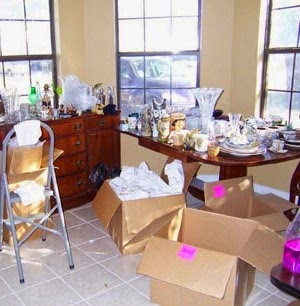 My brothers were fighting again, beating each other with whatever they found lying around, battering each other into the hallway, then through the doorway into my room, where they began reaching for whatever they could to continue the assault. The elder of my brothers reached down and grabbed my beloved stuffed Snoopy, whirling about to slam it into his opponent's face. Ouch! Those beady plastic eyes hurt when they hit! My brother reached out on the next swing, grabbing Snoopy's head. A tug of war ensued as I stood on my bed, screaming. Then, it happened.

Snoopy's head came off, stuffing went everywhere, and I reacted like any five year old who just watched her best friend get decapitated. They got a stern lecture from my father as my mother sewed Snoopy back together again, reinforcing the importance of not touching someone else's stuff. Yeah, you stupid boys! That was my stuff. MY STUFF. And my stuff is important. Much more important than your stupid old stuff. Leave my stuff alone!

Thirty two years later, my brothers and I stood in the doorway of my old bedroom. My father said softly "I put a lot of stuff in here. Look through it and see if there's anything you want." We sat on the floor, opening boxes of stuff, sifting through stuff, dividing up stuff. In the end, we all took some stuff, but nothing could change the fact that this was my mother's stuff, and she wasn't here anymore.


When my husband and I were first married, we couldn't wait to buy a bunch of stuff to put in our first home. Then we moved and got a bigger home, and needed more stuff. Of course, when the kids came along, we had to get a bunch of stuff for them, and then we needed some more stuff because hey, we deserved it, working so hard and being parents and all. Sometimes we'd get philanthropic and take a bunch of stuff to the Goodwill, which would mean we'd need to get some better stuff now that we got rid of the old stuff. Occasionally, we'd have a party and invite the neighbors over to see all our stuff, so they could compare it to their stuff. We'd reciprocate when we went to their parties, and if they had better stuff, well, we just made sure that didn't last for long.

Then one day, I stood in the middle of a bunch of stuff in my living room and watched him pull out of the driveway in a pickup truck loaded with a bed full of stuff. He was heading to his new house, where all the new stuff he'd bought with the bank account I didn't know about would be waiting. The kids rode along with him, excited about spending the night in their brand new rooms full of stuff at Daddy's brand new and exciting house. I remember looking at all the stuff laying around me and thinking it looked like a bomb went off. It did. A bomb went off in my life, and there I was, trying to put stuff back together again.

A funny thing happens when you become a single Mom - especially one with a special-needs child and an enormous mortgage - you find yourself having to get by without a lot of stuff. The good hair conditioner is replaced with stuff from the dollar store. The Chicken Marsala and Eggplant Gratin are frequently replaced with macaroni and cheese or scrambled eggs, or stuff on the clearance shelf at the supermarket. You also begin to realize that you really used to take a lot of stuff for granted, and you find yourself not needing a lot of it after awhile.

So here I am, looking back on the stuff that makes up my life and I know that none of the stuff that matters will fit inside a box or a truck bed. You can't buy the good stuff at the store or through a catalog, and no one can take it from you unless you give them the power to take it away.

Tomorrow night, I'm playing Monopoly with my daughter (who cheats every single time), and I'm going to watch my son as he snores in bed, with his hands folded under his chin. The cat will most likely jump on my chest around 3am for her nightly ear scratch, and I'll climb out of bed, maybe make myself a cup of hot tea, and step out onto the deck to look up at the stars in the cold night air. Eventually, I'll head back to bed and when I wake up and open my eyes, like magic, my life will start all over again. It's a beautiful thing, isn't it?

And when I get back to work on Monday, someone will ask me what I did this weekend, and I'll just shrug and say: