The Cat That Has My Back 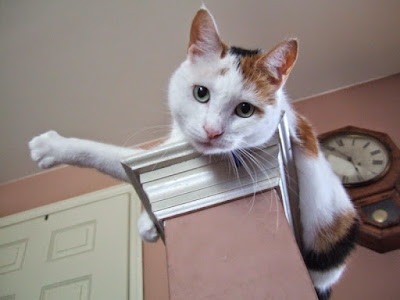 I grew up a dog person. When I went off to college, my poor mother got her heart broken because half my calls home were taken up with me asking her to hold the phone out so the dog could hear me.

It was with great surprise that I found myself adopting a little ball of meowing fur, found shivering in the cold outside my boyfriend’s apartment my junior year of college.

Thus began the odyssey of cat ownership. Geddy the Siamese was our first (what can I say – the boyfriend was a Rush fan) and so damn smart. He also had a real thing for barbeque Lays potato chips and would swat the bag until you shared with him. Four years later, the boyfriend and I were married and added Toodie, a domestic gray. That cat was as dumb as a box of rocks and drooled in her sleep, but never ceased to make us laugh. We loved them both, and when they died within a year of each other, we realized the house just wasn’t the same without them.

By then we had kids. My daughter was three and we decided she should get to pick our new cuddly-wuddly little kitty pal. We headed down to the local SPCA, filled out a ton of papers and paid a huge amount of money considering this was a non-profit organization. We left with a gorgeous nine month old calico, mostly white with black and orange and beautiful golden eyes. She didn’t seem to mind when my son crawled over and grabbed her fur. All in all, she seemed like a really mellow cat.

My daughter christened her “Kitty Cat Kitty Cat Go Go Go”, which was shortened simply to “GoGo.” We knew she’d fit right in and we’d all dwell in a world of feline fun and furry friendship.

She didn’t like my husband. I mean, she really didn’t like him. She was fine with the kids and never bit or tried to scratch them unless they did something that accidentally hurt her in their exuberance. She always liked a good rub between the ears and even deigned to let me pet her on occasion, but she just plain avoided him. Any attempt he made to pet her was firmly ignored or worse, snapped at with sharp little teeth unless he happened to be holding food she was interested in. She made it clear that he was of little use to her otherwise.

Then came the murderous stares. She’d sit down right in the middle of the living room, or on the loveseat and face him straight on. Then she stare, unblinking, for several long minutes. It was unnerving. There was no curiosity in this stare. There was no playful kitten-ish tilt of the head. There was only the nonverbal promise of the certainty of death, and it was directed solely at him.

I’d try to pretend I didn’t notice, but my husband picked up on it every time - probably because it gave him the willies, feeling the spotlight glare of his imminent doom. He’d sit there with the TV remote clenched in his hand and whisper, “She’s doing it again. Look at her. Look at her.”

I’d turn my head and call her name, and she’d jump down to walk over to me, allowing me briefly to give her an ear scratch. If he tried to pet her, she’d turn her back, raise her tail and give him a lovely view of a less-than-delicate orifice.

It was no surprise to me that when he walked out the door, he didn’t fight me for custody of the cat.

I stood there watching the truck pull out of the driveway, the kids waving at me from the back because he got the first custodial weekend. I shut the door and looked around at my house. It looked like a bomb had gone off – furniture missing, DVD’s scattered, closets half-emptied. I suppose it shouldn’t have surprised me. A bomb had gone off, right in the middle of my life.

I walked through the house, randomly picking up discarded items, keeping myself busy, holding myself together pretty well until I saw my son’s favorite stuffed kitty – the one that looked just like GoGo. He’d forgotten it and he usually slept with it every night. I picked it up, walked up the stairs, crawled into my daughter’s bed and cried until I felt like my insides had oozed out through my tear ducts. When I finally opened my bleary eyes, I was nose to nose with GoGo.

In all the seven years we’d had her, she’d never once slept on our bed, but there she was, snuggled up on the comforter. She got up and playfully bumped her head against mine and I remember saying “GoGo, we’re gonna be okay."

And with his departure from the house, came an entirely new cat. She was playful. She sat in laps and curled up beside me in bed every night. She swatted at yarn and head-bumped and rolled on her back so we could scratch her tummy.

Every long, silent kid-free weekend, she listened to me talk to myself or playfully batted at my fingers as I wrote on my laptop. She tipped over the popcorn bowl while I tried to watch Netflix and sat on the remote and watched me with amusement (I saw it in her face! I did!) when I went crazy looking for it. I got through those early months with my sanity intact because I could let it all hang out around one suddenly supportive cat.

The ex came to pick up the kids for his weekend visit just recently, and because she was walking by, he decided to give her a friendly pet. She saw the hand coming and bit him on the leg instead.

She’s got my back, and a place on the pillow beside me at night, at least until someone finally comes along that meets with her approval.