Resting Uneasy At The Hotel Rwanda 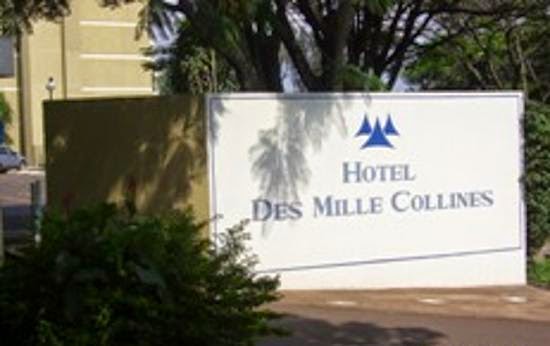 Several years ago, while working as an executive assistant for a major pharmaceutical company, I had to plan a trip for my boss to Rwanda.

Rwanda. Holy cow! Can you even get a plane to Rwanda??

It turns out you can. More than one in fact. You can fly there direct via British Airways from Brussels, Belgium mainly because there are a lot of Europeans who visit the area for the Silverback gorilla wildlife preserve in Kigali. The movie "Gorillas in the Mist" was filmed there.

So I began the long and interesting process of setting up my boss's trip to Kigali, Rwanda. He was an executive director, and the company was making a very large charitable donation of our pneumonia vaccine to the children of Rwanda. Pneumonia kills thousands of children there every year, due to the high humidity rates in the mountainous forest region they live in, and the general lack of "first world" medical care. My boss was a pompous, high-maintenance, pointy-haired jerk of a man, and he insisted that I find him the highest level of hotel accommodation possible because "a third world four-star hotel is our single star, you know".

After a bit of investigation and some calls to the assistants of other executives making the trip, we all agreed upon one of the two four-star hotels in Kigali, the Hotel des Mille Collines - otherwise known as the "Hotel Rwanda", for those of you who saw the movie. I hadn't at the time, but I'd heard the name so I started reading up on it, out of curiosity.


I sat at my desk for the next hour - maybe even two, staring at my monitor as link after link fed me story after indescribable story about the horror of the genocide that took place in this now peaceful country. The survivors telling tales of wounds, both physical and mental, that will never heal. I had no idea. I remember vaguely seeing something on the TV about it, of course, but that was someone else's country. It didn't happen here, so it's all OK, right?

It made me wonder if they once felt the same way, when they heard the evening news about other countries. And it made me wonder how easily rival factions can turn to violence and genocide, if the hatred festers long enough. I found myself wishing we could send more than vaccine. I was deep in my research when my phone rang. It was my boss.

"Did you get the hotel set up for Rwanda?"

"Yes, John, it's done. They've booked a block at a four-star hotel there. Actually, it's sort of a landmark. The Hotel des Mille --"

"Yes, yes. I'm sure it's as good as I'll be able to get. Do we have any idea if they have a restaurant there? With real food?" he asked, peevishly.

"The website says there's a fine dining establishment on site, with an award winning chef."

"Right." He gave a bark of laughter. "I suppose I'll have to pray the airline serves enough sushi to stuff my pockets with."

"I suppose." I replied, politely. "Anything else?"

"Just make sure all the hotel transfers are taken care of by whatever passes for a car over there. And make sure they're dependable. I don't want any surprises."

I had just hung up the phone, when an email came through from another assistant, informing us that while the Hotel des Milles Collines is a four-star establishment, the rooms are not air conditioned. Air conditioning is a rarity in that part of Africa, but there are ceiling fans in the rooms.

I made an executive decision then and there not to inform my boss. He'd only send me on a mad goose chase to either (a) locate "a hotel with air conditioning, by God" or (b) at least "get him an extra goddamn fan, for Christ's sake". I'd just play dumb, and he'd just have to deal with it.

He called me the day after arrival, of course, to complain about how he suffered that first night. I tried to sound appropriately sympathetic, but somehow, I don't think he really understood the word "suffer", as he lay in his soft bed in the Hotel Rwanda.


Ellie is the author of David And Me Under The Sea: Essays From A Decade With Autism.
Follow Ellie on Twitter and Facebook
By Ellie DeLano - December 18, 2014