"Remember That Time David Pulled Out Your Hair Till You Bled?" 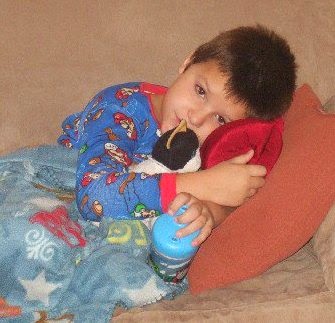 My daughter and I got into a discussion last night about the circumstances of her birth - or more accurately, her conception.

You see, both my children were conceived via invitro fertilization. They're "test tube babies," due to a severe infertility issue that made it impossible for my ex and I to have a biological child any other way. It was a long, hard road filled with five years of invasive tests, horrific drugs, thousands of dollars and a whole lot of heartbreak before we hit the jackpot with our two little miracles.

Anna asked me if it were possible to genetically sculpt the "ideal" baby, and I explained to her that it wasn't yet, but there are tests available to screen embryos for certain birth defects, and some people opt to "sex select" their embryos, choosing only boys or girls. We did none of that, because it just plain didn't matter to us. Boy, girl, Down's syndrome or no, we knew we would love that child.

Of course, I had no idea I'd end up with a child who had autism, but then again, neither did any other autism parent. Would I have changed my mind about that pregnancy if I had known? The autism Mom I am now says absolutely not. The pre-autism woman who thought that was an incredibly frightening word might have chosen differently. My son was the first person with autism I had ever known. He was a new frontier, and we learned all about it together. We're still learning.


And then Anna said (with a frankness that only a thirteen year old girl can deliver): "Mom, if they have a test for autism when I decide to have kids, I'm taking it. I don't want a kid like that. You know me. I couldn't deal with it."
I wanted to remind her that she most certainly could and did "deal" with autism every day in this house, but I smiled and said, "Every Mom wants the perfect kid, Anna. You get what you get, and you know what? The kid makes it worth it. I promise."

She gave me a raised brow and then she reminded me.

"Remember that time David pulled out your hair till you bled?" she said. "You were in the bedroom when Dad came home and you wouldn't stop crying. Remember?"

It had been a bad, bad, day. It was shortly after David's diagnosis. He was three, and he tantrummed almost non-stop back then because he was so terribly frustrated. He couldn't communicate and he couldn't regulate when he was overstimulated and he had absolutely no impulse control. That day, he punched me in the face. That day, he kicked me down the stairs with both feet. That day, he shrieked non-stop for nearly three hours, refusing to nap. That day, he pulled a chunk of hair out of my head so hard, my head was bleeding.

That day, I was working on two hours of sleep because he was getting a tooth in and his six year old sister had night terrors - and my husband slept like the dead through it all. That day, his sister would not leave him alone, getting in his face, poking and prodding him, instigating and pushing all his buttons. They were fighting like rabid dogs and I was all alone, with a husband who worked over an hour from home at a job he couldn't just up and leave early from very easily, and no family around to support me for hundreds of miles.

And that day, I broke. I just couldn't do it anymore. I remember dialing the phone, sobbing so incoherently that my husband couldn't understand anything except "Come home."

I put the phone down, and I went to my bedroom, and I laid on the floor. I turned my face into the carpet, and I cried. And I kept on crying. I simply wasn't able to stop.

I remember Anna, sitting next to me, patting my back. I remember David, crying, upset because I was upset, trying to climb on me and make me get up. And eventually, their father came home, got them downstairs, made them some dinner, and thundered a bit at the both of them for the way they'd treated their mother.

I crawled up into bed, and he asked me if I wanted dinner. I told him I just wanted to sleep, so I did. And then sometime shortly after midnight, my daughter screamed me awake in her sleep, and the cycle started again.

But the next day was a better day. Thank God. Thank God it was.

And as hard as it is right now, remembering that day, or the fact that there were many of those days and on the rare occasion, I still have a day similar to that one, I realize that I don't see how hard all of that was as much as I see how far we've come.

So I told my daughter the truth, and I know she saw it in my eyes.

"Anna, if you get a kid like that,  you'll handle it. It's what you do. And it'll work out. You're a strong girl and you'll be an even stronger woman, and there is nothing, nothing you won't do for that kid. Nothing."

Life is never perfect. Or planned. But it teaches you things about yourself that you really needed to learn.