Once Upon A Time - Season 4, Episode 12 Recap: Belle, The Bad-Ass With All The Balls

Oh, the fearful, wary anticipation of a Once Upon A Time pre-hiatus show. I'm still reeling from the fateful goodbye scene of last year's mid-season cliffhanger, and I  knew we were going to get our guts ripped out again.

Damn you, Kitsis, Horowitz, and staff. Damn you.

We begin with Elsa demolishing the ice wall, but that didn't do the trick - the barrier still stands. Emma points out that a portal is needed and Anna points out, in her usual adorable fashion, that Arendelle is in big trouble from Prince Hans and his mancandy brothers.

Killian slinks back into the bushes upon hearing this, and then heads for Gold's shop to give him the news. Rumple is happily squeezing Killian's heart, causing him to make what I like to call "his 'O' face (which I simultaneously am disturbed and excited by). 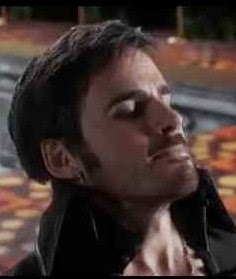 Killian asks him a bunch of leading questions to get to the truth: Anna knows all about Rumple's plans with the hat, and therefore, she's a danger. He also gets Rumple to admit - yet again - that he's going to crush Killian's heart and kill him super dead when he's done.

All of this is done about eight feet away from Belle, who's sleeping in the same room. And I always thought Rumple was a clever guy. Rumple brags that he's going to give Belle the life she's always wanted, and we flash back to the Enchanted Forest, and Rumple's castle, back when Belle was his Stockholm Syndromed domestic help.

Belle is snooping around and gets caught red-handed by Rumple, who was testing her to see what she did while he was away. She demands that he tell her all about the great places he's been to, because she longs to see the world. He gives her a souvenir from Camelot - a place we hear about a a lot but never seem to visit.

The souvenir is a magic gauntlet that reveals someone's greatest weakness. I imagine we'll need to remember that one, so I'm mentioning it here. It also leads nicely into Rumple remarking that everyone's weakness is the thing they love most.

Back in the modern world, Rumple wakes Belle with the barest touch to her face after two grown men (one of them groaning in pain) trading sneers and barbs right in front of her failed to do so. Rumple tells her to pack a suitcase, because they're off to The Big Apple and all new adventures.

Regina stuffs the heart back into the newly thawed Marian, who follows Regina to Granny's in order to thank her for saving her life - twice. She also drops a big unexpected speech, telling Regina that Robin obviously loves her, and if he chooses Regina, she'll bow out, which leaves Regina feeling simultaneously thrilled and guilty beyond belief because this chick is hella cool and obviously a genuinely decent human being.

Aww! We get to see the sorcerer's broom walking around, and once again, Killian is plying Rumple for information because Killian is clever and playing this to the end. The broom reveals a magical portal in what turns out to be the sorcerer's house that super-coincidentally leads right to Arendelle, where Anna, Elsa and whathisname can all go and not jeopardize Rumple's plans.

Meanwhile, back at Gold's shop, Belle is packing her suitcase and Henry is calling her Grandma, much to her chagrin. He shows her the magical storybook (and for some reason, Belle is really blah about it - and when has Belle ever been blah about any book?) and then he roots around the shop and accidentally knocks a pile of stuff over, revealing the magical gauntlet from Camelot. This is obviously disconcerting for Belle.

Back in the Enchanted Forest, Belle tells Rumple he's missing a chunk of his heart, and he gets pissy and poofs her to the forest to hang laundry. While there, she runs into a dalmation puppy with magical blue eyes and a hooded figure who grabs her from behind.  Rumple goes looking for Belle, and a raven drops a magical holographic sanddollar at his feet that projects an image of Belle telling him to bring the gauntlet to her captor, or she's a goner.


In Storybrooke, meanwhile, Rumple is directing Killian via the heart, and I want to give a BIG shoutout to Colin O'Donoghue for some exceptionally fine acting - he even had Robert Carlyle's inflections and bit of his mannerisms coming through in his dialogue - soooo effective. Killian/Rumple tells Emma about the portal, and she knows something's up. She asks Killian point-blank if he's okay, and he/Rumple responds that he's fine, but grabs her arm and squishes the everloving snot out of it, clearly trying to send her a message. Go Killian! Yes! Stick it to the man! 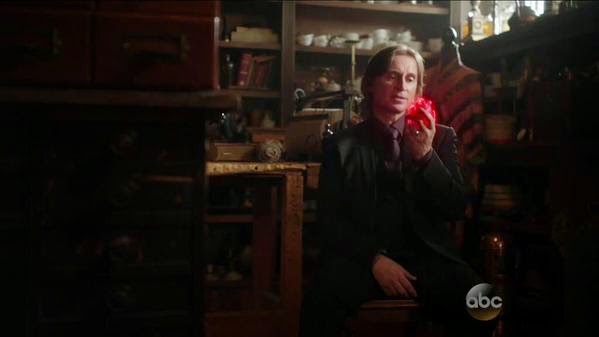 Over at the park, we see Roland having a wonderful time with his Mommy, who suddenly hits the dirt again, and starts turning back into a popsicle once more. It turns out that some of the spell has remained and now it's probably  infected her heart (after just a few minutes even though it took a long while to reach it last time). The only way to save her is to take her out of Storybrooke, cross the town line to live in the normal world - the one without magic. Regina tells Robin that he has to take Marian and Roland and go.

And my heart hurts now. Poor Regina, she just can't get a break! We move next to a strangely touching dialogue between Regina and Rumple regarding Villains and their lack of happy endings. Rumple is bidding her a poignant goodbye and encouraging her to just make her own happy ending by letting Marian die. Regina looks at Roland, and of course, she just can't do that.

So she walks Robin to the town line, kisses him goodbye, and watches as he steps over, never to return again. She rips up the book page that showed her should-have-been happily ever after and walks away, and I have to stop typing for a moment because somebody's cutting onions in here.

In the Enchanted Forest, shit has hit the fan as Rumple encounters the three big baddies of the second-half arc, all of whom want the magical gauntlet. I'm thrilled to see Maleficent again, I'm glad they're finally exploring Ursula a bit more, but how the hell did Cruella de Vil end up in the Enchanted Forest? She's really standing out like a heavily-browed sore thumb, and despite the delicious barbs she's trading with Rumple, she just feels....wrong.

Rumple ends up handing over the gauntlet to save Belle's life, and Belle asks him why he cares. He replies with a prophetic "If anyone's going to crush your heart, it's going to be me."

We then say goodbye to our trio from Arendelle with a bunch of hugs and Anna finds out before she steps through that the helpful Mr. Gold is really the lying liar who's secretly a sack of lies, Rumplestiltskin. Emma finally realizes he's been playing them all along.

In the clocktower, the stars are aligning and Killian is preparing to go to his death, Emma and Snow try to intervene, only to be frozen in place. Rumple begins to squeeze, but for some reason, he can't crush Killian's heart.

I will confess here and now that I secretly wanted that to be happening because Killian's heart belongs to someone else, but the writers didn't take that angle. Instead, they wrote in a huge pair of gonads for Belle, who's been one giant milktoast all season, and she grabs the dagger. She makes Rumple give back the heart, and then she makes him take them to the town line, where she tells him to get the hell out of Dodge.

She tells him that the gauntlet took her straight to his true love - the dagger. The power. And she's tired of losing herself trying to help him. He's an addict, and she knows that she can't save him - not if he won't save himself.

Have I mentioned that I love Belle? I'm telling you now, if the writers decide that Hook and Emma can never be (and I will be seriously pissed if they ever do), I think I could be very nearly as happy if he ends up with Belle. Remember the chemistry in that scene in Season 2 when he was threatening her with the gun? I've never been turned on by a man holding a woman at gunpoint before, but the two of them had something going on. Remember?

Belle commands a tearful, pleading Rumplestiltskin to leave Storybrooke, knowing that he can never come back. He steps over the town line, and crumples to the ground, a broken man. His whispered "Please...I'm afraid...." ringing in our ears - and hers.

We fly over to Arendelle where - finally! Elsa has a wardrobe change. She and Anna (resplendent in a wedding gown straight out of "Enchanted") stand before a portrait of the three sisters and realize that they've somehow forgotten what chocolate smells like. Hans has been deposed, Anna's wedding is about to begin, and it's possible Kristoff was in the scene even though he didn't speak - I saw a lot of wallpaper. Off they go. I'll miss you, Anna. I really, really will. Wish we could have kept you.

Back at Granny's, (and why the hell did she carry his heart all the way to Granny's, anyway?) Emma puts Hook's heart back in his chest and he pins her to the wall with the hottest kiss in the history of the fandom. DAYum. Forget what I said about Belle. I know I just did.

Instead of reaching behind her for the doorknob into Killian's room (fool of a woman!), Emma heads out to the restaurant to toss back some shots with Regina. Henry rushes in, full of excitment after finding a secret room in the sorcerer's house that clearly shows that the sorcerer is in fact, the author of the story book. Regina and Henry let Emma in on operation Mongoose, and Emma vows to help Regina find her happy ending.

Six weeks later, we're in New York at the Aquarium, and we see Rumple tracking down Ursula to let her in on his own version of Operation Mongoose. He tells her they're collecting the rest of the big bad trio, and off they go, prepping for the second half of the season. Which is a long. long time away.

Back to my fanfiction folks. But in the meantime...

This one did everything it was supposed to do, and redeemed Belle for the entire season. Maybe the entire run of the show.


My biggest hope for the coming second half:

Ellie is the author of David And Me Under The Sea: Essays From A Decade With Autism.
Follow Ellie on Twitter and Facebook
By Ellie DeLano - December 15, 2014