Once Upon A Time - Season 4, Episode 11 Recap: Bitchy, Snarky, Well-Dressed And Wonderful - Welcome Back To Storybrooke!


Welcome back to Storybrooke!
I mean, really - welcome back. We've sort of lost our way on some of these story arcs, and while I adore Anna, find Elsa palatable and am in awe of the Snow Queen's magnificent rack, there hasn't been a lot this season that's made me feel like the old days. The days of bandit Snow and virile Charming, red-carpet dresses and viciously snarky Regina. The days of saucy Hook, deadpan Emma and oily, but irresistable Rumple.
This episode brought us back to our roots, and to one of the best parts about the Once Upon A Time universe: no villain is beyond redemption.
Our story this week begins in Boston, circa 1982, where our buddy the Cleavage Snow Queen is wandering the streets of Boston and decides to consult a psychic in an effort to find out more about the happy unborn blonde sister baby she's been creepily promised by an old guy and his hat of Disney Death. The psychic turns out to be a phony with a wicked smaht Boston accent and Ingrid storms out vowing that she will one day find herself a nordic minor to latch onto.

Back in Storybrooke present day, we see the Snow Queen walking through the raining mirror glass and watch the beginning of the curse's ill-effects, which are, quite frankly, hilarious. Screaming dwarves, Snow and Charming trading zingers...hell, even Kristoff Wallpaper almost shows some personality. And Anna is adorable. Oh, Anna. I just love ya.
Anna remembers that according to that old Nordic Arendelle legend (that Emma knows as well, I assume because she was partially raised by her pre-birth stalker), as long as you kill the royal jerk who cast it, you can break the spell, so Emma hands over baby Neal, and she and Elsa take off to commit regicide.
Rumplestiltskin then oozes onto the screen like the steaming pile of crocodile dung he's become, and  Hook reminds him that he's a complete and total jerk with a God complex and enough self-entitlement to float a continent of thirteen year old girls....or maybe he just calls him a villain...whatever. Rumple orders Hook to go fetch Henry so he can take Henry and Belle to the town line and escape to New York with them, the place he's choosing out of all places on earth he could go to either out of some whiff of love he still feels for Henry or because he's going to start a little Indie theatre or something. Belle and Henry won't remember a thing, and will see him as a hero while everyone else dies a horrible, tortured death. Oh, Rumple.

Regina, on the other hand, has decided she's sealed in her vault and it's all Emma's fault. I didn't mean for that to rhyme and as a blogger, I should find a better way to say that, but I'm pressed for time here so I'm leaving it. Anyway, Regina goes through a costume change and once again becomes the Evil Queen with a murmured "I've missed you." Oh, Regina. Me, too, honey. Me, too.
Next we flash back to young Emma and her foster stalker, Ingrid, who turns out to be non-creepy and surprisingly likeable. So we're going all LOST here and we're not going to be sure where this chick's allegiance lies and whether we root for her or not. Freaking writers. Anyway, Ingrid is obviously well on her way to being a mother-figure for Emma, which is odd considering she's trying to force sisterhood on the kid.
Meanwhile, the streets of Storybrooke erupt in chaos, and Hook is making his way through the teeming masses as Emma and Elsa try in vain to cut their magical sister-ribbons off. Down the street at the sheriff's office, Snow and Charming are at each other's throats, with Anna interceding and Wallpaper chiming in and I love it.
Emma decides that the only way to remove the ribbons, which are bound by magical love, is to find an equally strong source of hate. She's going to free Regina and open up a can of bitchfest.
The Snow Queen is seen playing with her little purple balls and we flash back to young Emma again, who's at the amusement park with her stalker sister, who, as it turns out, is trying to adopt her. Emma actually says "I love you," which has only happened a few times in the entirety of the show, so that's pretty significant.
Emma and Elsa show up at Regina's vault, which is covered in a containment spell. Emma tries to get rid of the spell and falters, Elsa gives her a pep talk (instead of, y'know, offering to help her) and she gets it on the second try. Go pseudo-sisters! Emma goes inside to find magnificently-clad Regina who throws out a zinger reminiscent of the good old days. Emma taunts her, telling her that she brought Marion back just to piss Regina off, and that she wanted Regina to see just how freaking happy she and Hook are together, which is about a thousandth of a percent as happy as I was when they finally macked onto each other. Regina tosses a fireball that, for whatever reason, only hits the ribbons, and disintegrates them. Emma throws Regina into a wall and she and Elsa take off, leaving Regina free to roam about town.
Yeah, God forbid you put the protective spell back up, you magical amateurs.
Hook, in the meantime has gone to fetch Henry, who delivers a hilarious line about a pirate's general lack of hygiene, and says he never liked Hook and likes him even less now that he's together with his Mom, prompting Hook to answer: 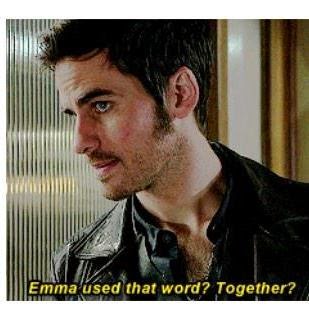 With his trademark, rogue-ish grin and my ovaries popped like popcorn. Henry foils Hook with some carefully placed Home Alone marbles, and gets away, leaving Hook to deal with the Knave, who's hunted him down for some revenge. The knave takes a swing and ends up faceplanting and the I-don't-have-time-for-this-shit look on Killian's face just made the scene. God, I love this show.
Once again, we flash back to teen Emma, who's with stalker Ingrid, who has turned from nurturing mother figure into batshit-crazy woman. She drags Emma in front of a speeding car and commands her to stop it. Emma freaks out and Ingrid tries to explain that she was just trying to help her get her magic thang on. Emma runs away, and Ingrid looks suitably bereft.
Back in the present day, Regina shows up at the Sheriff's station, turns to Wallpaper and says what we've all wanted to say since episode one:"I don't know who you are but why don't you go back to where you came from."
We flash to Storybrook, circa 2001, where the sorcerer's scroll helps Ingrid find Storybrooke ten years before Emma arrives. I have no idea why Regina never noticed a stranger showing up eighteen years into her endless curse, but that's just a minor plot inconvenience and we get a lot of those around here. It does help explain why Ingrid has never aged, however.
We watch Emma as she has her previously pictured argument with Ingrid. Emma is resplendent in her first-season curls and trademark red jacket, and my heart actually fluttered when she said she was calling sheriff Graham, hoping we might get a surprise cameo for just one steamy moment, but it was not to be. The Snow Queen takes Emma's memories instead.
Back in present time, Emma and Elsa meet up with Ingrid, who shows the girls the little purple balls which are supposed be crystals but look like little bouncy balls you get out of a grocery store vending machine, and they store all the happy memories she's shared with the both of them.
Over in the sheriff's office, Snow is bitching at David over his thrift-store stroller as she battles Regina, who is throwing snarky remarks with finesse and style while swordfighting in a floor-length, corseted gown. She and Snow really get into it, and David looks on in horror while the rest of us cheer out loud.
Oh, Regina, I've missed you. But not nearly as much as I've missed Snow. Not Mary Margaret, you understand. Snow. The outlaw bandit. The chick with the gumption - and a wardrobe that doesn't look like thrift store curtains.

Anna and Wallpaper find themselves poofed back to the beach next to the trunk they arrived in, and Anna woos her man with the time-honored Storybrooke tradition of hitting him in the head, this time with a bottle - the very bottle that her Mother tossed into a stormy sea, carrying an important message for her children.

Anna takes the letter to the ice cave where Emma, Elsa and Ingrid are having a standoff, Anna explains that the abnormally long, multi-chaptered letter that takes up eighty-nine inches of scroll was hastily scrawled by Mom as the ship was going down around her in very neatly lined penmanship, despite being tossed about by a fierce and tempestuous storm. The letter says Mom really did love Ingrid and contains the memories that all the people of Arendelle had concerning her sisters. 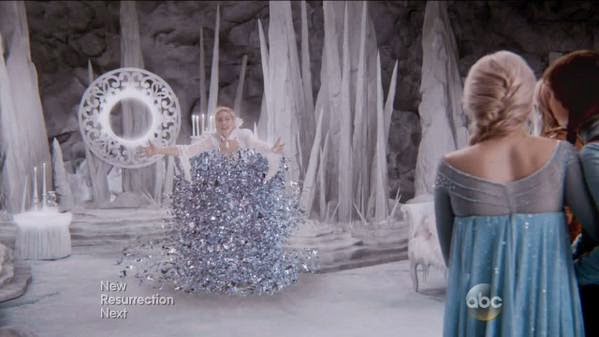 The Snow Queen pulls the spell back, sacrificing herself and her magnificent cleavage, and saves the town. Anna and Elsa decide to take the memory of Ingrid and Helga back to the people of Arendelle, Storybrooke turns nice again, and in the best moment of the episode, Snow, David and Regina burst into laughter at their ridiculous selves.

We end with Snow and David kissing, Regina and Henry hugging, but Emma doesn't get a warm, fuzzy moment with Killian, oh no. He's too busy with Assholestiltskin, who is kind enough to let Killian know that it's his last night on earth, since his heart will be crushed when the stars align with the hat tomorrow, freeing the jerkwad from the influence of the dagger. Killian makes a plea for Emma and the others and is left looking soulfully off into the distance as millions of women massage their uteruses and stare longingly at their television screens.

Holy cow, was this episode good.

This episode reminded me of exactly why I fell in love with this show. Villains can be redeemed, and love always wins, no matter how many twisted obstacles the writers throw at it. I am going to be on tenterhooks, waiting to see whether or not Emma can rescue my captain's heart before they go on endless, tormenting hiatus.


Ellie is the author of David And Me Under The Sea: Essays From A Decade With Autism.
Follow Ellie on Twitter and Facebook
By Ellie DeLano - December 08, 2014