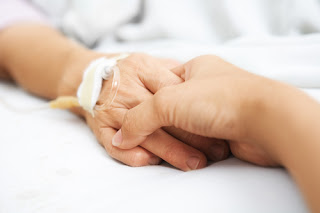 It was Christmas Day, and the man sat at her bedside, holding her hand. There was very little sound now, as her breathing was barely audible. Before, there had been a riot of noises – heart monitor beeping, ventilator going ka-thump, nurses and doctors shuffling in and out. Now the machines were all unplugged and the nurses came in quietly, respectfully, and the world – his world – had closed in to just this woman and her breathing, and on the periphery, his son, sitting vigil at his side.

What had been a quick trip to the Emergency Room for what they thought was a horrible stomach virus had turned into this. She had been admitted 3 days before, on their forty-fifth wedding anniversary, and now she wasn’t going to come home. This isn’t what she’d want. She’d never want to die at Christmas. It was her very favorite holiday. The man turned to his son and said “This is hard. This is so hard.” And so, with his son’s hand on his back, they sat through the long night and waited.

Over 2,000 miles away, I waited, too.
Dad had called around 6:30 to tell me that things had gone from bad to worse to nearly over. We scrambled and begged and called up the chain and managed to get on a flight leaving at 8am on the 26th – there was nothing that would get me home that night. So there I sat, in my dark living room, staring at the lights on my Christmas tree as I waited for my mother’s heart to stop beating.

It was an easy decision when Dad called to ask if I wanted him to turn the machines off, or leave her on them till my brothers and I could get there. She was in a deep coma, her heart, kidneys and liver were failing. They would breathe and pump blood for her, but they couldn’t bring her back. My brothers and I were all in agreement with our father, and the machines were silenced. I was at peace because I knew – and Thank God I knew – that there was nothing unsaid between my mother and me. The only regret I had was that I hadn’t had more time to say it all again.

A few months after my mother died, I had dinner with a former boss of mine who’d recently lost her 92 year old mother. We embraced at the restaurant, trading condolences, and she said something that’s always stayed with me. She looked at me a long moment after we hugged and said “It’s weird, isn’t it? It’s a different world without your mother in it.” And it was. I remember standing there at the viewing thinking that the person that had loved me longest in the whole world was gone now. I had become a mother myself just 20 months before, forever changing me and who my own mother was to me. I always knew my mother loved me, but the exact nature, the depth, the consuming fire of that love was something I’d only touched on before. I knew it now. I knew it with every breath in my own daughter’s body.

So there I sat, through that long night, looking at the lights on the Christmas tree and waiting for my mother to stop breathing. How many nights had we sat on the couch, looking at the tree together? My Mom loved Christmas lights. She’d drive five minutes to the grocery store for a gallon of milk we didn’t need in December just so she could take 40 minutes to come back, driving around looking at everyone’s lights. And I’d always find a reason to have to ride along with her when she did. It didn’t seem right, her dying this day. She’d hate it. She’d be furious if she spoiled Christmas for anyone. I found myself getting angry, and I reminded myself that I always knew this day was coming.

Somewhere in the long, long night, I heard a muffled sound. My daughter talks in her sleep and has pretty much from birth. I’d learned to tune it out long ago. That night, it called to me. I headed upstairs, reached into the crib and pulled her out. She snuggled into my shoulder, her eyes half-opening and mumbled “Mommy” in a sleepy voice before she was out again. I carried her downstairs, and settled us both on the couch. There I sat, holding her beating heart to mine, thinking about motherhood and mortality and endings and beginnings as the lights twinkled and my daughter dreamed in my arms.

Two thousand miles away, a dark room began to lighten. “Sun’s coming up,” said my brother. “Looks like she made it past Christmas, at least,” said my father. The next moment, quietly, and peacefully, my mother breathed no more, and it was a different world forever, because she wasn’t in it.
By Ellie DeLano - December 26, 2014