Once Upon A Time, Season 4/Episode 8/9 Recap: The Episode Where Regina And Robin Totally Did It 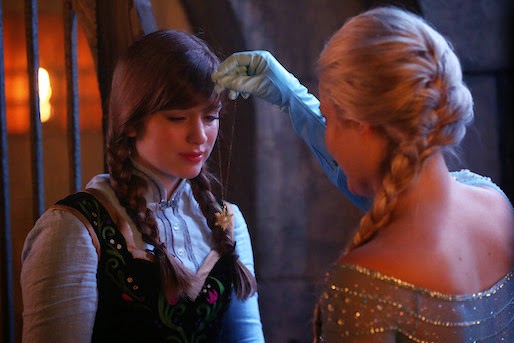 We begin today's Epic Two Hour Episode(TM) in Arendelle, where the Snow Queen is seen hiding the Disney Hat of Death(TM) in an extremely shallow hole in the ground (apparently, the hat has no effect on groundhogs) and freezing it over for good measure.

She seeks out the Sorcerer, talks to his apprentice and offers him a deal: find me a magical blonde baby and you'll get your hat back. She makes the deal by uttering her words (as usual) in a smiling, creepy deadpan, three words at a time. It's like Christopher Walken and Julie Andrews had a demon-possessed child or something everytime she's on the screen, I swear.The apprentice thinks that kidnapping a baby is do-able, but she may have to wait a while for a magical one, in a land where every third person and anyone born of true love has magic. Well. Okay, then.

Back in Storybrooke, however, Emma is still dealing with her electric palms (and not realizing just how much fun those could be if she manages to tame them) and when Henry shows up, she gets a bit twitchy and ends up knicking his ear. Nothing as epic as this, mind you:


But enough that there's blood and she's anguished and Henry runs away because that's what the writers told him to do even though we know Henry would never run away.

We then find our way back to Regina's vault, where Robin appears in a muscle-revealing undershirt  - not quite as good as this, but close enough for family TV: 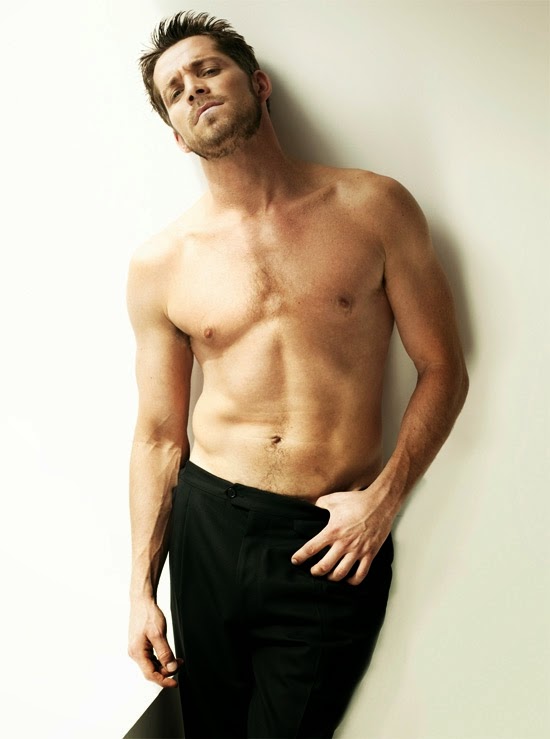 And this clearly establishes that he and Regina bumped uglies (oh, who am I kidding,there's nothing ugly about it - I'd pay to watch that because they're both gorgeous) and then the writers have them talk about it a few more times to really belabor the point. Regina shows Robin the book and lets him in on Project Mongoose, even though Henry hasn't given her approval to bring anyone else on board.

Henry, meanwhile heads home to rub it in Snow's face that Emma's out there and it's all her fault. Oh, and his minor nick is still bleeding, even though he's walked home on foot from the woods and it surely would have scabbed over by now. Maybe you want to get him to the doctor to have that looked at, Snow. They won't have Emma to worry about anymore, because she's making a deal with Rumple to get rid of those pesky powers. Once Snow and the rest discover this, Hook goes into a panic, because he has a good idea just how Rumple's going to grab those powers, since he previously played the part of the evil henchman last time Rumple used the hat.

Back in Arendelle, Elsa breaks Anna out of jail, and the two of them along with some talking wallpaper - oh, wait, that's Kristoff - go looking for the Magical Urn of Entrapment(TM) in the crumbling East Wing of the house. We find it in a wardrobe (oh, God, how I wish they could do something with the wardrobe...I'd love me some Narnia crossing over into Storybrooke), next to a life size Prince Hans popsicle.

Elsa asks Anna if Mom and Pop were really going to suck her powers away, and Anna lets her know that she thinks it was a lousy idea, which echoes into present-day Storybrooke, where Snow and David are overheard by Elsa discussing the fact the Emma losing her powers might not be the worst thing in the world. Of course, Snow has to first make a remark to Regina about her unbuttoned blouse, so we know, beyond a shadow of a doubt, that Regina and Robin did the nasty. Which they did. They totally did.

And now Robin took off with the book and has enlisted the Knave to help him track down the writer, thereby bringing yet another person into Operation Mongoose.

Eventually, Elsa takes the tracking spell that Regina brought over and goes after Emma. Hook, of course, has already done so, and finds himself giving a dramatic monologue via cellphone in the middle of Mr. Gold's deserted shop. He confesses via voicemail that he's been lying to Emma, recording it for all posterity so that Emma can dial it up later and it will provide a necessary wedge between them since they've been doing entirely too well together. I also have to wonder about him revealing that the dagger is a fake - is Belle hanging out in the back room? The writers don't throw stuff in there like that for no reason. They don't do anything for no reason, except maybe writing scenes with Kristoff in them.

Rumple meanwhile, has trapped the Snow Queen in a circle of  Magical Urn of Entrapment(TM) dust, but that doesn't stop her from projecting herself into Emma's path and giving her a concussion. They do love to knock people out on this show, don't they? She's still got a long way to go to catch up to Hook, though. I think he spent most of season two in a drooling stupor and probably has a lot of short-term memory loss.

Back at the apartment, Snow flat-out asks Regina if she banged Robin so we can get a full picture of how they totally did it. Regina then reminds Snow and David that not believing in someone for exactly who they are is a big mistake, even bigger than hiring a wicked witch as your nanny. Finally!  A great snarky Regina comment. I shouldn't have had to wait until the second half of an Epic Two Hour Episode(TM) to get one.

We flash back to Arendelle again, where The Snow Queen has turned the tables on Anna, and hits her in the eye with slow-motion flying glass that Anna is strangely unable to avoid even though her legs and feet aren't bound in any way. She's now been cursed with the Spell of Shattered Sight(TM). Spiffy.

Snow, David and the gang go tracking Emma, and none of them seem to notice that Hook stepped outside and never came back. His voicemail sits, unlistened-to on Emma's phone as she makes her way into the house.

The knave and Robin break into the library looking for something else that's magical, and a page from the book suddenly shows up. Robin calls Regina (who he TOTALLY did it with) and she rushes off to be by his side.

Emma, in the meantime, shows up at the creepy abandoned manor where Rumple has set up the Disney Hat of Death(TM) and tells Emma to walk through the doors, but not before engaging in a conversation that went somewhere along the lines of  "I clearly cannot choose the goblet in front of me..." He leaves her to make her decision, then has a run-in with Hook who shows up to save the day, all for naught, because Rumple ties him up and taunts him instead.

Which could have been really hot, if they'd put Hook in an undershirt or something. Just sayin'. 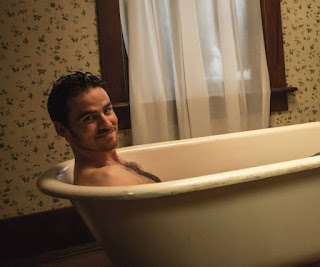 Elsa shows up and gives Emma an inspirational speech, Emma regains control of her powers, and Rumple is foiled. He's not done yet, though, not by a longshot. He needs something to complete the spell that will free him from the dagger, and that happens to be the heart of someone who knew him before. And he does it. He takes Hook's heart.

Oh, my God, he took my Captain's heart.

Did you hear that? It was the sound of millions of sobbing women, their faces frozen in horror, their arms reaching for their television screens in a rictus of pain as we realize this probably spells the end of our beloved Captain Swan, at least for a good, long while as the writers screw with us.

Hook grabs the box that houses the Disney Hat of Death(TM) and tries to clumsily shove it inside his inadequate, modern jacket, presumably to use it on Emma at a later date, now that he's being manipulated by Rumple.

And back at the library, Robin shows Regina the page from the book, and it turns out Regina really should have met Robin all those years ago and that means Regina's future isn't set in stone and they kiss again because that's what you do after you totally already did it.

In Arendelle, however, we see the Snow Queen freeze the entire kingdom (which will conveniently freeze Anna and wallpaper Kristoff in time, rendering them the same age as everybody else when they get revived, of course), and then we see the Snow Queen walking barefoot through the snow because the cold doesn't bother her anyway. And neither do sharp rocks, twigs, or hidden reptiles, I guess. No need for protective footwear here.

She and the Sorcerer's Apprentice seal their deal and she trades the hat to him for passage to our world, emerging in the middle of a busy city, a la Enchanted. We then fly back to Storybrooke, where the Snow Queen's Sister Ribbons of Magical Enslavement(TM) have taken hold of Emma and Elsa, and The Snow Queen and Rumple go nose-to-nose before she sets loose the Spell of Shattered Sight(TM).

Holy crap, is there a lot of magic in this episode. And despite the writers, who are seriously rat bastards, I'm giving this one five hooks out of five.

There was a lot explained, a lot of heartache, a lot of good, and a little bit of hope. A perfect mix.

But they really are bastards.