Once Upon A Time - Season 4, Episode 6 Recap: Captain Guyliner And The Evil Ice Cream Truck

We begin today's story in a land far away, or should I say a library, where a beautiful woman who could only be Belle's mother is heroically saving books. She yells for her daughter, who is apparently an afterthought to the books, and in scurries Belle, wasting precious time reminiscing about a particular bedtime story. This, of course, gives the ogres time to show up, and Belle loses her Mummy, because, Disney. Oh, and she loses all memory of it, too, because, Kitsis and Horowitz.

After a quick seven seconds in Gold's shop (where we see him put the magical hat box in the safe) we rush off to the Sheriff''s station where Emma has convened anyone whose name appears on the credits at the beginning of the show, shows them the videotape with the Snow Queen from her childhood and they all take turns saying obvious lines. "She cleared everything out of her house and shop," "That means she's hiding something," and that sort of nonsense.

Luckily, Henry is here to remind us that he is a kid, despite his lowering voice and five o'clock shadow, and he knows all about the Snow Queen's Magical Evil Ice Cream Truck. They split up and decide to search east and west, even though David just told everyone the Snow Queen is hiding in the North Woods. It's a bad day when David is the smart one of the group, people.


We go back to Belle now, who is determined to regain the memory of her mother being ripped limb-from-limb before her eyes, and she's found a book that tells her where to go and what creatures to find (rock trolls, I'm thinking) to get those warm, fuzzy memories of her mother's agonized screams and vicious bloody death back in her head where they belong. Dad, the retired linebacker with the family accent reminds her that "all magic comes with a price" and forbids her to go. Like that ever works with anyone on this show. She pulls out a map to Arendelle, because I know how to call it.

Back in the Storybrooke library, we discover that Belle is a lying liar who lies before we get tossed back to Arendelle, where Anna (who needs some lying lessons from Belle) is telling Elsa that she has no idea why their parents wanted to get the hell out of there. Anna is also incredibly suspicious that Mom had a magical sister she never once mentioned.

Anna is now the brightest person in Arendelle.


Did I fall through a portal into Bizarro Once Upon A Time? Kristoff (oh, there he is...blending into the scenery....) assures her that she isn't really really dumb, and she's off to Oaken's.

Meanwhile, in Storybrooke, The Snow Queen has just parked the Evil Ice Cream Truck (which Regina remarks upon with her usual outstanding flair) right in the same spot that once held August's broken-down trailer, back when he was slowly turning into white trash wood. Robin chooses this moment to try to get in a heart-to-heart with Regina, who sets up a zinger for Emma about the way Emma and Hook make eyes at each other, only to have the gag ruined by the director having Hook turn partly away, casting his eyes in shadow so we can't see him making eyes at her a second later. Noob.

Hook and Emma find a really old, obviously planted scrapbook with all kinds of young Emma memorabilia, including the same newspaper article that August had about her being found on the side of the road. At least they didn't have to go far to find the prop. A quick trip back to the library finds Elsa swirling in snowflakes and Belle lying her lying face off like the lying liar she is before we flash back to an old friend I actually let out a squeal for:

Oh, how I love Oaken. And this guy has him down. Perfect! Belle meets Anna at Oaken's trading post, and Anna agrees to take her to the rock trolls (can I call it?) despite the fact that Belle will later become a lying liar over it.

Meanwhile somewhere in the North Woods, we discover that Rumpelstiltskin seeks out the Snow Queen to  make a deal with her. She's got something he needs and she knows it. Of course, we don't know what the hell that is because she's being mysteriously vague and eerily creepy, as always. But her jugs do look magnificent in that dress.

Back to the Gold house, where Belle (wearing Mary Margaret's frumpy clothes for some reason) is tearing around looking for...a pickaxe? She then flashes back to Arendelle, where Anna's apparently had a few mugs full of Oaken's famous egg nog because she falls on her fool face trying to shimmy up a twenty degree incline, dropping the magic hat box at Belle's feet and letting her know what the hell it is and does.

We flash over to Storybrooke again where Regina gets all selfless and tells Robin to fall in love with his wife, the heartless human popsicle. Back at Gold house, Belle yanks out the faux dagger and uses it on Rumple, demanding that he take her to the Snow Queen. Rumple, of course, pulls the old "I trusted you" guilt trip on her for doing it, because, of course, he's got to cover up the fact that this dagger ain't even making him twitch. He probably used the same line on her when he caught her checking his texts while he was passed out after that party last week.

Then we trek back to the North Woods (another terrific place that magically popped up in Storybrooke) where Emma and Hook are leafing through the scrapbook that the Snow Queen so meticulously slapped together. Hook remarks that the Snow Queen must've kept all that crap because she loves Emma, and also throws out a line about the wounds of our childhood having a lasting effect, once again setting up an excellent callback for the writers in a future episode. They also find a scroll, and we all know nothing good comes from scrolls in this place.

And now we find out that Belle is looking for the magic hat. She heads into the Snow Queen's cave right before we flash back to Belle meeting the rock trolls, who got all the special-effects budget this season and it shows. Grandpabbie tells Belle to make some tea with rocks and go on her merry way while Anna learns that Mom (the conniving bitch) had not one, but two sisters. Lucky for Anna, Belle didn't really go away, so off they go to confront the Snow Queen about the other missing sister.

Back in the ice hole (heh!) Belle finds the Snow Queen's mirror and sees...herself? Then we whiplash over to Belle and Anna who are stuck on the side of a mountain where the wind is whipping all over the place and Anna is just sure it's her evil aunt's fault. Belle drops the happy tea stone of horrific memories and scrambles after it, and Anna slams into the ground waiting around for Belle to rescue her. Nice going, Belle. The Snow Queen makes off with the body and back in Storybrooke, the mirror in the ice hole (heh!) mocks Belle for all of it. The mirror also casts doubt on the validity of the dagger, causing Belle to grow some balls and try to give Rumple a shave.

Rumple gets her the hell out of there, she crumples to the ground and Belle whines about how she's just the worst person in the history of ever. She twists the proverbial dagger by saying she knows that Rumple would never keep a secret from her.

Back in the Enchanted Kingdom, dear old linebacker Dad lets Belle know that Mom went to her bloody, eviscerated death because she put herself in front of Belle. See, sweetheart? Daddy loves you enough to put that on you. Belle tells dad she's going to seek out a powerful wizard, and Dad forbids her to talk about he-who-must-not-be-named.

Wait, where are we again? 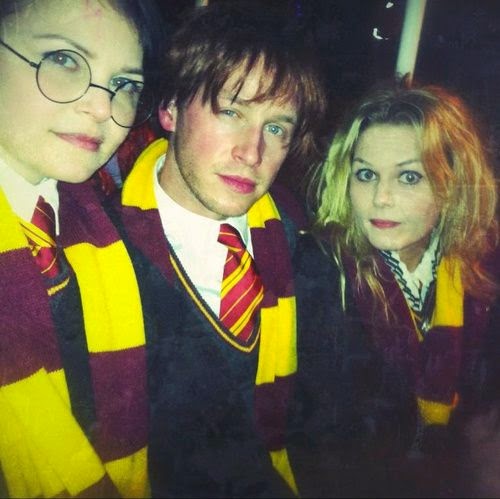 We flit away from Hogwarts The Enchanted Kingdom back to the ice hole (okay, that's one too many) where Rumple flashes the hat at The Snow Queen and warns her about using her mirror, which seems to really piss her off.

We go back to Arendelle, where the Snow Queen has Anna behind bars and has now taken the same magic hat box. She tells Anna that she's just not magic enough to hang with the big girls. We flash back over to Storybrooke, where Hook hilariously points out that everyone in the damn town is related so it should be no surprise for Elsa to find out that the Snow Queen is her aunt.

Elsa reads the scroll that Hook found, and we discover that once again, there's a rambling prophecy and it's all about our favorite Savior, Emma. Belle rushes in to let them know she actually does know Anna, and to fill them in on the horrible spell on the mirror, one that will - of course - tear the town apart until it's only the Snow Queen, Elsa and Emma living happily ever after. Gee, that's rough. I mean, it's not like the town regularly whips itself into a pitchfork-toting frenzy every other episode, right?

Stay tuned next week, where there's a vague possibility we might see more than two minutes of Regina, since they expanded her role by a whole thirty seconds this time around.

My rating: Three hooks out of five.

There was a whole lot of plot going on, but we need more sarcasm, stat.