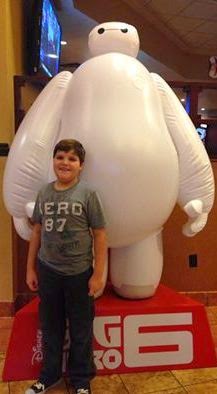 Big Hero Six looked like a lot of fun when we first saw the movie trailer in the theater, and Disney has been on a roll lately, so the kids and I were really looking forward to this one.


Let me tell you - it delivered!

Baymax is the creation of Tadashi, the older brother of our protagonist, Hiro, and they live in the semi-futuristic city of SanFransokyo. The inflatable robot is meant for a career in health services, but gets recomissioned by Hiro to fight an evil supervillian and avenge his brother's death.

This brings me to my only gripe with the movie, and with Disney, in general. They killed off the kids parents, and now they grease his brother. Thank goodness he still has his quirky aunt, but really, Disney - can't we have an intact family unit? It can work, I promise! See "The Incredibles" for reference.

Plus, Tadashi was really cute. I mean "Yeah, I'm looking at an animated character in a creepily cougar kinda way" cute. But I digress.

The movie has a strong emphasis on the bringing together of friends who support you, and also keep you in check when you develop an overwhelming thirst for blood and vengeance, and those are good qualities for any group of friends. It also delivers loads of belly laughs, plenty of warm, fuzzy moments, and really awesome superhero development and animation.

My kids were digging it from the opening scene through the end credits, and I was just as entertained.

We all give this one a HUGE thumbs-up!!