Sunday morning found me waking, bleary-eyed but unable to get back to sleep:

Three days, and I was still on Philly time. Dammit. And since I really didn't get entirely to sleep until after 4am, this was a problem.

So I sat down to write - amazingly, without a hangover again (go figure) and got some stuff done until my roommates woke up. Then we packed up the room, checked the bags with the hotel for storage, and off we went.


Jill (who will forever be known as "Jill the Awesome Vegas Goddess") got a line on a buffet that the locals consider to be one of the best: The Garden Court Buffet at the Main Street Casino in downtown Las Vegas. The price is $10.99 (and if you join their free player's club you get $1 off), and the food was good and there was a lot of it (including free mimosas). Of course, if you're broke-ass broke like me, your good friend Jill spots you the money so you can actually eat that day.

The best part was the ambiance, though. Check out the old world style of the renovated train depot: 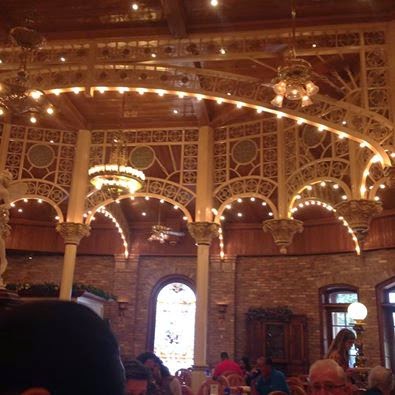 I wish I could have gotten a better picture of that stained-glass window because it was just gorgeous. the whole room was like this, and the service was friendly and exemplary.So after gorging ourselves again and getting staggering buzzed on mimosas, we realized that (a) even with our resources pooled together, we didn't have much money between us and (b) it was noon and we had nothing to do until 4:30pm when Jill's awesome friend was coming to pick us up.

So we wandered Fremont Street for awhile, and I got to see Elvis, at least.

So we wandered and got tired of wandering (truthfully, we were tired already and the buffet put us into a seriously lethargic state) until finally, we parked our tired asses in a diner inside the hotel, and we ordered three drinks and a plate of fries, much to our waiter's delight, I'm sure.

Finally, Jill's friend arrived to take us to a place I'd been eagerly looking forward to visiting: 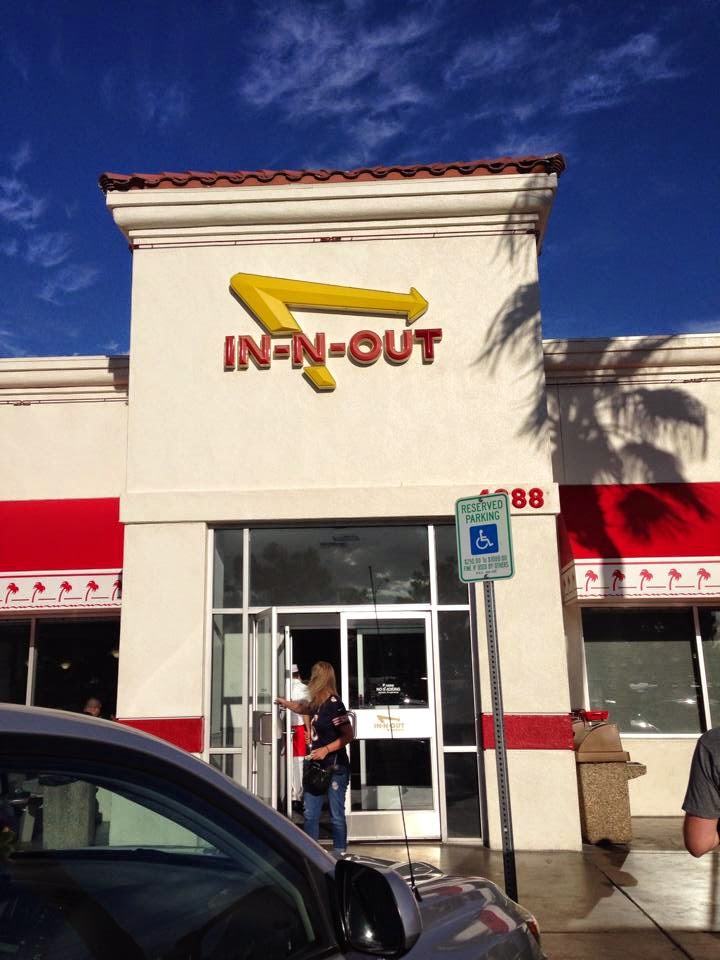 As an East Coast person, you have to know that I find it hard to believe anyone could be better than Five Guys. Five Guys has awesome burgers. But I'd heard from people who'd tried both and it seemed pretty evenly split, so I hereby and forever profer my opinion:

Five Guys > In-N-Out
No contest. Not even close.

Don't get me wrong, it was a pretty good burger, but - the patty was kind of small, they over-toasted the bun to the point where it was hard as a hockey puck on the edges, and then I tried the fries.

Yuck. I mean...just yuck. They had this weird, styrofoamy texture that was just a real turn-off. Are they even real potatoes? They were, like, hollow inside and the mouth-feel was just off. The flavor was fine, but I couldn't get over how weird they were. And almost the entire table agreed that nothing beats Five Guys Fries. Carrie was the lone dissenter, sucking down her "Animal" fries like there was no tomorrow.

So my final, official rating is this:

You don't know Blake's unless you're from my home state or surrounding area (or have visited there), but once you have a Blake's Lotaburger with cheese and green chile, you will never be able to surpass it. Seriously.

So we left In-N-Out and headed back to the hotel, got the bags, and hung out waiting for the shuttle. And that's when I realized how very sad some of the people in Vegas are. I mean, you see some sad cases in every big city, but there seem to be a lot of them here, wandering the street, asking me for money, sitting around in the casino with tired, vacant eyes, chainsmoking, and all of them looking like they're waiting in quiet resignation for their life to just resolve, one way or another.

It was sobering. And even though we were broke-ass, we weren't that bad off. We had homes and families to go to, people who loved us and jobs and lives and the ability and fortitude to try to make those lives better for ourselves. Broke-ass was a temporary state (or in my case, a sustained temporary state) and we weren't resigned about anything.

Except airline travel. That can really suck the soul out of you. I flew on Spirit because they were $200 cheaper than anybody else, and there's a reason for that. The seats are as tight and uncomfortably positioned as possible (and don't recline), you can't pick your seat without paying for an "upgrade", checked baggage is $35 each ($100 at the gate), and you don't even get so much as a soda for free on a five hour flight. Thank God I packed the granola bars and bought a bottle of water right before I boarded the plane.

I hugged Jill and Carrie goodbye on the shuttle (they were flying out of another terminal) and eventually I climbed aboard my red-eye flight home. I layed the poker-chip pillow I purchased for my daughter up against the bulkhead of my window seat, put my head on it, and honest-to-God, the next thing I remember is them coming over the loudspeaker to tell us we were making our descent into Philadelphia.

Back to life. Back to the mundane. No more footballs full of booze, crazy street characters, endless buffets or money-stealing machines. And you know what? A weekend was just the perfect amount of time. I think if I had to stay 4 or 5 days or even a week, it'd be too much, at least at the pace we were setting. It's nice to be home.

The world may not glitter, but it's my world, and I am far from resigned to anyone else's definition of my fate.

So long, Vegas. It's been swell.

Email ThisBlogThis!Share to TwitterShare to FacebookShare to Pinterest
Labels: Vegas14