Sell The House, He Said. It'll Be Better For You, He Said

When he first said he was leaving (via email, if you can believe it. God knows I couldn't at the time), he wrote: "We'll sell the house. The kids will be devastated, but we can both start over."

The problem was, of course, that he had already started over, with someone else. All that remained was for us to divvy up the detrius that made up our lives; furniture and DVD's and bank accounts and yes, a house.

When we moved in fourteen-plus years ago, I was barely pregnant. Just enough that we knew, and were overwhelmed by the blinding joy of a new life and a brand new, wonderful house in an outstanding neighborhood with the friendliest neighbors you'd ever want to know. It was perfect. Idyllic, even. 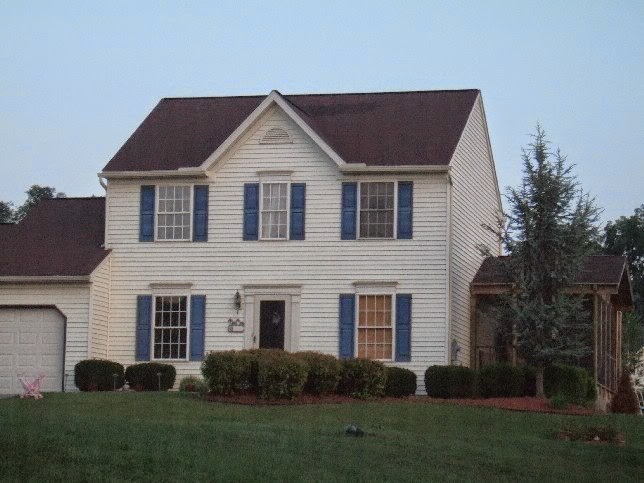 A great place to raise our daughter, and then our son. We hung out with our neighbors at backyard barbecues and annual Christmas parties. My daughter's three best friends live next door, across the street and three houses down - all the same age, all growing up together. I have a nurse, a family therapist, a school aide and a speech therapist on the block - immensely helpful when you've got a son with autism. We go to school fundraisers and events all the time, and  we see the whole neighborhood at the local apple festival, or at the pizza parlor.

And when he left, I stood at the door and watched the truck pull out of the driveway with the kids inside (he got the first custodial weekend), and I collapsed in my daughter's bed, sobbing into my son's favorite stuffed kitty that he left behind, and then the doorbell rang.

It was a neighbor, with a hug and a bottle of wine. And then the phone rang. And rang again. The next day, I had a loaf of warm banana bread put into my hands, and on Mother's Day, someone's husband (I never have found out which one) came over and mowed my lawn for me, so I wouldn't have to on Mother's Day.

And last Christmas, when Santa came around the neighborhood to visit the kids (like he always does), there was suddenly a gift for me, as well. It's no secret that I'm living on the thin edge of a dime, and Santa and Mrs. Claus - my wonderful neighbors who do this every year - slipped in a gas card for me along with my kids' presents. Just because.

My son can ride his bike around the neighborhood, and I don't worry about him. He's got eyes in almost every window, and friendly faces that stop him just to find out how he's doing, knowing how important that socialization is to him. My daughter has a safe, protected area where she can roam with her friends, and places where she can hang out that are a second home to her, if I'm running late from work or need to run to the store while she's out.

But the truth is, this house is killing me.

It's a lot of upkeep for a single mom with a full-time job and a second job and primary custody of her kids. Their father left when the house was ten years old, and all the contractor-grade appliances were beginning to falter. I haven't had a working oven for three years. My washer stops in the middle of spin cycle, leaving me with sopping wet clothes that need two or three runs in the dryer. My deck has some warped boards and rickety railing, the screens on  my screen porch are coming apart, and there are a hundred little jobs all around that need to get done by someone who knows how to do them. I'm trying to learn what I can and find time and money to do it, but it's slow going.

And then the axe fell - just last week. I lost my second job. It wasn't entirely unexpected - I'd seen it coming and did my best to find other revenue streams, but nothing major has come down the pike yet. Now I have to tighten the already tight belt to the point of asphyxiation, and that means we do without a lot. We aren't going out to eat anymore - not even pizza. No more once-a-month movies at the movie theater. And of course, Christmas will be a good deal less festive at our house. We've already given up cable, so maybe Netflix is next. I had to let the babysitter go and hope my kids (ages 13 and 10) will be okay for two hours until I get home.

Good luck finding a job that will only work you every-other weekend. I sure haven't had any luck. But we'll manage somehow. I'll make it work.

On Friday, I got his email.

"You should think about selling the house," he urged again. "You've lost that money - how are you going to keep it?" he asked.

And he's right and wrong all at once.

My mortgage (which was refinanced at the top of the market to pay off our previous business loan) is now 89% of my take-home pay. You read that right. Eighty-nine percent. With child support added in, it drops to fifty-eight percent, which is do-able but far from ideal. I'll never get ahead. I'll never be able to save anything. One flat tire, one blown water-heater, one emergency room co-pay, and I'm in a rolling cycle of late payments that I may, now, never be able to get out of.

If I sold the house - and that's a big "if," by the way. We're underwater on the mortgage and we need a lot of minor repairs that will add up quickly to get it in salable condition - if we sold the house, I could move to that cute little town home community up the road, where the association mows my lawn, the HOA fees are very reasonable, and they even have a pool for the kids to use in the summer. We'd still be in the school district, and I'd be saving nearly a grand a month. If.

I'd pretty much resigned myself to being house-poor until my children were much older - probably when Anna graduates. By then, David will be sixteen and able to handle losing the home he's lived in his whole life. At least, I hope so. He's a child with autism who will become a teen with autism. I don't know what moving will do to him. But when Anna graduates, I lose her portion of the child support, so we'll have to move, anyway.

So I gently, very gently, asked Anna her thoughts. What would you think about us moving to a smaller place? I asked. Like those ones up the road. You have friends there, right? And they have a pool. And with the extra money we'd have, we could take vacations - real ones in hotels or maybe even Disneyworld or something. We could get cable again.

"I know, Anna. And I'm not saying we are leaving. Not yet, anyway. I just wondered how you felt about it."

She was vehement. "We can't move. This is so much more than a neighborhood. And how do you think David would be? He'd be freaked out."

"I think so, too," I said. "But he'd also adjust. He's going to have to, eventually. I'm not living here forever, you know."

"Please, Mom. Think about it," she urged. "Think hard. I don't want to go." Her eyes filled with tears, and she turned away.

So I took a deep breath, and later that day, when I had her brother in the car, I got his opinion. I drove through the townhome community on our way back from the grocery store. I pointed out the pool - David loves to swim - and I mentioned all the friends we know who live there. I asked him if he liked the houses and if he'd ever want us to live there, maybe.

"But if we ever wanted to move away from our house and live here, would that be an okay thing, do you think?"

"Move away like Daddy did?" he clarified. "Would me and Anna come, too?"

I said no more, because this, for me, is the final word. The kids want the house, and until such time as I'm backed into a wall and have no other option, we stay in the house they both came home to after birth. The house that's held birthday parties and Christmas trees and endless popsicles on the back deck in the summer. So we say goodbye to pizza, and vacations, and movies out, and extravagant gifts. We still have each other within these four walls, and we'll make it work.

Something will turn around. I'll just keep the faith.

And in the meantime, I pick up a drill, and a hammer, and get busy.