Once Upon A Time, Season Four, Episode Four: Captain Hook And His Naughty, Naughty Hand

We begin this week's tale with a visit from our old friend Zoso – remember him? I must say, his dental hygiene has improved. He’s here to provide valuable plot fodder – specifically, we learn that the reason The Dark One wants the sorcerer’s hat is because it’ll free him from the dagger and give him unlimited power. Unfortunately, nobody with a dark heart can touch the damn thing so he’s out of luck, and so is Rumpelstiltskin.

Meanwhile, back in Storybrooke, Henry, who previously thought Hook was God’s gift to cool, has suddenly decided that he’s not okay with him after all, but will let his Mom date the guy anyway.. Not exactly a ringing endorsement. Then we step inside Granny’s just in time to see Hook playing darts for the sole plot convenience of being able to miss his shot when Emma asks him out.

And with all due respect to the amazing face and demeanor of Mr. Colin O’Donoghue (for truly, he is a God among hirsute men), but nobody – I mean nobody – should be targeting that dart board but Sheriff Graham. Don’t sully that memory for me.


Then again, the two hottest guys in the show have now handled those darts. Robin Hood can’t be far behind. After all, he never misses, right? So maybe the dart board has magical hot guy properties or something. I need to find me one of those.

So we find out that Anna made a deal with Rumple and then we watch Hook (who has obviously been hit on the head a few too many times in this series) do the same to get his hand reattached. Rumple warns him – as always – that all magic comes with a price. In this case, Hook’s hand might take over and turn him deliciously evil again. I dunno, but I can think of a lot worse things than Killian Jones with a particularly naughty hand. Am I right,girls?

Anna pays the sorcerer’s apprentice a visit, and refuses to slip him the potion Rumple gave her, which was exactly what he wanted her to not do and therefore he thought she was turning from darkness but really she wasn’t because she’s entirely too wide-eyed and naïve to have ever been dark in the first place. Right. So he goads her a little bit and her eyes narrow and viola! She was momentarily dark-ish and that’s good enough for him.

And back in Storybrooke, Mama Snow (who is adorable) and Papa David are seeing Emma off on her first date with Hook and somehow we time-warped back to 1950, because Emma only needs a string of pearls and a kid named Beaver to complete that look. Hook shows up hook-less and the best she can come up with in the way of a quip is “Captain Hand.” Why Killian didn’t take that and run with it, I’ll never know. Then again, this is a family network, I guess. 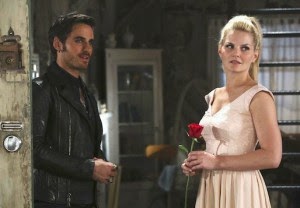 So we’re off to a really swanky restaurant that suddenly appeared in Storybrooke (guess that second curse brought a whole new side of town!) and it’s complete with people channeling animated dogs. They make the most of Hook – oh wait, he’s Killian now – they make the most of Killian’s new hand by showing him twining fingers with Emma (or maybe they were playing ‘Mercy’ across the table or something) until the Knave shows up and decides to crash headlong into the Sheriff he was so desperate to avoid. This, of course, angers Hook’s hand and it travels up his arm to tighten his jaw and turn his eyes steely instead of dreamy as he defends his lady and millions of women all over the world felt their panties go up in flames.

But while we're all fanning our private areas, Anna has turned the tables on our dear Rumple, grabbing the dagger right out from under his nose and demanding that he return her (and the sorcerer's special sooper seekrit box) to Arendale, and as a side note, he can never harm her or her sister again. Nice going, Anna, but you forgot Kristoff. Not that I blame you - I still find him entirely forgettable myself. That kiss was about as exciting as watching the grease congeal on a plate of Granny's lasagna. *yawn*

Thank God, we're back to our lovebirds, who are now saying goodnight like a couple of lovestruck teenagers after the Enchantment Under the Sea dance at the high school gym. Emma goes in for the kiss (after twining hands yet again), Killian meets her halfway and we get to see that naughty, naughty left hand move....to gently cup her face? Oh, come on, now. I fully expected that villainous hand to grab her butt or something.

Emma closes the door to find Mom and Dad waiting up (and Dad was especially hilarious - I love me some daddy David!) and then heads upstairs to put on a long, virginal 1950's nightgown and dance around her bed singing about how she's Sandra Dee or something.

Killian decides after that to go beat on the knave for awhile, then because he got his knuckles bloody he finally realized that making a deal with The Dark One might not have been in his best interests. Ya think?? I'm telling you - he's been hit on the head too many times.

The Dark One, of course, makes another deal and Killian basically signs over a blank check from his "I'm your personal slave" checkbook to get his hook back only to find out (after helping commit a dastardly deed) that the hand was fine and it's him who's still rotten and Rumple was just playing a mind game to show him that. Hook admits he's still got darkness within him, and that it could crush Emma's heart. And he's so upset about that, he's not going to talk to Emma, or seek therapy, or any of that nonsense. Instead, he's just going to be Rumple's personal lapdog and hope it all works out for the best.

How many fingers am I holding up, Hook? Sheesh.

Oh, and I forgot to mention Emma parked in a puddle of water, chases the Snow Queen for exactly 73 seconds, and has apparently developed the superhuman ability to run on ice without falling. Ain't magic grand?

We end with Henry (who had a two minute scene earlier with Regina) infiltrating Grandpa Gold's shop as his new apprentice, and doing a half-assed job of it, too. Cronyism at it's finest.

Tune in next week and maybe we'll find out if Emma dons a skin-tight black catsuit and Killian throws on that new leather jacket, and we all go to the county fair.

My rating: Three hooks out of five.

Mainly because I really don't buy Killian being this incredibly freaking stupid.