Once Upon A Time, Season 4, Episode 3: The Adventures Of Prince Hans And His Man-Candy Brothers 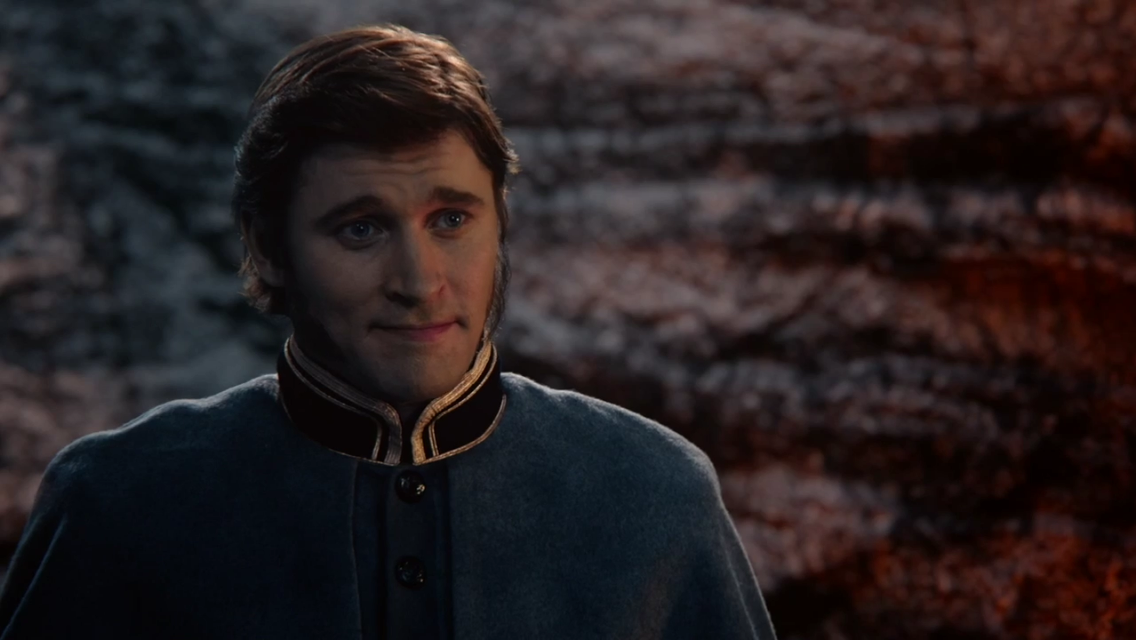 We begin our episode with a trip to the ice cream parlor that no one's ever known about and doesn't question the sudden appearance of - even when it's right next to Granny's. Little Roland used to come here all the time with his beloved Aunt Regina, and of course, he has to skewer mommy with that, much to our great and evil delight. And of course, despite the extremely creepy purveyor at the parlor, Marian orders vanilla.

Then we go visit the Golds, who apparently keep the dagger of all evil just laying about. Maybe they use it as a letter opener? Nutcracker? It's probably pretty handy if they're eating cheese and crackers. And of course, Rumpel won't help anybody. He's turned over a new leaf, but he's still an asshole at heart.


We move on to the Grumpy show, and he's bitching about something. I have to tell you, I love, love, love Lee Arenberg (and have since The Pirates of the Caribbean), but they gotta give Grumpy something else to do besides bitch. Grumpy being grumpy is fun for awhile, but Grumpy working against type is even better. Remember Nova? *sigh*

Now we're in the mayor's office for a town hall with less than a dozen interested citizens. I think maybe Snow needs to invest in some PR, here. And Snow, you need to put the damn baby down. Smishing the child to your bosom as you try to juggle a stack of papers (I'm guessing PowerPoint hasn't made it's way to Storybrooke yet) is just not working, and your husband has those big, strong arms that are more than capable of holding a baby securely. Don't waste those arms, honey. I know I wouldn't.

Whoops! There goes Marian! What a shame. Just....kick her off to the side there and we'll get on with our story.

Meanwhile, back in Arendale, Elsa and Kristoff are generating more chemistry than Anna and Kristoff, and something tells me that could be a problem. Kristoff acquitted himself slightly better this episode, but still...I'm not loving him. I'm trying to, but I'm not yet.

I am, however, loving the living sideburns out of Prince Hans. So deliciously sociopathic. "I didn't kill her. I...left her to die." My goodness, he's spot-on. I adore him. And I definitely want to move to his kingdom and make the rounds with those brothers of his, especially tall, dark and handsome bro and Thor bro. YUM.

Dammit, Emma. You need to just get the hell over yourself, already. Hook, if she hurts your feelings a few too many times (and you're not interested in macking on the popsicle chick - 'cause you and Elsa would make some beautiful babies), I'm available. I'll never be mean to you, not ever. Well, not unless you want me to be. I am quirking my eyebrow devilishly as I write this. I really am.

On to Granny's where Regina is rocking the pony tail and she and Henry have just launched their epic quest - which, if interviews are to be believed, will be a major story arc for them this season - and I love it. I so love them working together on this. And of course, when evil rears it's ugly head (or gives you an ice cream cone), we call the former queen, because Rumpelstiltskin's too busy turning into milk toast.

"Hi Regina! I know you're my ex-girlfriend, but can you fix my wife?" Geez, Robin. Talk about balls.

And the award for best line of the episode goes to Regina, who often gets this title:

She's right. That's one damn ugly painting. But what can you expect from Mary Margaret? I swear, the costumers want her to look as absolutely frumpy as she can be. That skirt needs to burst into flame, already.

So Emma and David meet Will Scarlet, and decide to just break and enter instead of calling the owner of the shop or anything. Then again, the shop did suddenly appear out of nowhere, which should automatically give them pause, but what do I know.

And now we see a glimpse of the old Hook, and I didn't realize how much I'd missed him. Good for you, Killian, calling Rumpel on his lies. It figures you'd see right through that crap.

So Prince Hans turns into an ice-sculpture, his brothers run off, with their firm buns a-jiggling, and the Snow Queen is Elsa's Aunt, whom her mother never, ever mentioned, not even once. People are big on secrets in the other realm, aren't they?

Really, Emma, you expect Hook to just let you go off and face danger while he twiddles his....thumb? Not gonna happen. But at least we meet the Snow Queen and get to put Hook in jeopardy, forcing Emma to finally find her inner badass and start really using her magic.

Shall we take bets as to how the Snow Queen knows Emma? I'm saying foster care. She was her foster Mom or was in a home with her at some point. They've left a lot out of Emma's past, and we do know that when she was three, her adoptive family suddenly traded her back in. Why would someone do that?? Hmmmm......

There's Hook, hanging out, looking for a drinking buddy, and of course, Emma just strolls on by. With all due respect, Emma, you do need a man. Maybe that's why you're so bitchy, honey. And as always, Hook calls her on her nonsense, reminding her of one essential fact:

"If theres one thing I'm good at, it's surviving." So to prove that, I'm going to kiss you smack-dab in the middle of the busiest street in town,

I'll forgive it, though. At least we got to see him kiss her.  So far, he's been the perfect gentleman and other than a hopeful memory-retrieving kiss in New York (which lasted half a second), he's let her initiate every kiss. This time he grabbed her in a strong and manly fashion and kissed the bejeezus out her. Yeah, baby!

And we end, as they like to do, with a mystery. So Emma does know the ice queen, but doesn't remember her yet. And Rumpel definitely knows her. The plot thickens. Will the Dairy Queen freeze the rest of Storybrooke? Will Regina use Marian's heart like her own personal voodoo pincushion? Will Emma allow Hook to make full use of the hand he gets back next episode ('cause damn, Emma, I'd be all over that)? Stay tuned. I'm definitely going to.,

My episode rating: Five hooks out of Five.

They did a lot right in this one.


Ellie is the author of David And Me Under The Sea: Essays From A Decade With Autism.
Follow Ellie on Twitter and Facebook
By Ellie DeLano - October 13, 2014