Once Upon A Time, Season 4: Episode 2 Recap: Tarzan Meets The Iceman

Hello again, Storybrooke fans, and welcome back to the Anna and Elsa show, this time with a few bonus scenes from the ancillary characters. Tonight's special guest: Tarzan! 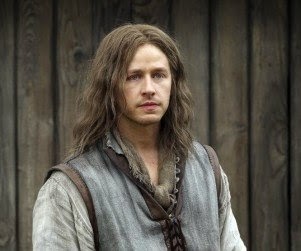 
Was it just me, or did David's hair make anybody else Laugh Out Loud with great, forceful gusto? I do have to say, though...it grew on me (no pun intended). I was kinda digging on it the more I looked at it. And props to the wigmaster on that show - sometimes, wigs look like horrible wigs (see: Rosalie in all but the first Twilight movie) or at best, obvious wigs, and this one looks natural.

So...now that we're over that - how about we talk about:


And let me just pause to say how much I love, love, LOVE Bo Peep the badass. LOVE. Next, we need Miss Muffet and her giant, killer spiders. What the hell, Harry Potter and Lord of the Rings have done the spider thing - might as well hop on the bandwagon.

Now on to my favorite part of any Once Upon A Time Episode: Hook.

Ahhhh, Hook. They give him the best lines. "I didn't risk my life for someone I consider to be booty." He really was endearing, chipping away at that ice wall, wasn't he? And so very tortured while Emma was turning into a popsicle. Colin O'Donoghue can do tortured like nobody's business.

And please tell me:
And writers, I'm looking at you: how could you let a golden opportunity go by for Hook to remind them that the fastest way to get her warm is skin-to-skin contact? You're slipping. I'll forgive you that, though, because you let her fall into his arms instead of Daddy's, and then you went and had them interlace their damn fingers while holding hands.

I am big, ole puddle of womanly feelings after that. Keep throwing in the little romance bits like that. We eat it up. Or at least, I did. And the cats. I'm a single woman and I have cats, so I need this stuff. Humor me.

And the biggest shout-out of the episode goes to Snow White, for finally being Snow White and not bland, useless Mary Margaret. It was great to see her showing some backbone again, and that rant was epic:

Here's hoping that her new job as mayor returns her to her former glory, because she badly needs to be there.

It was great to see Henry reaching out to Regina (who was in the episode for  grand total of about sixteen seconds - not ideal), but damn. Puberty much? That boy seems to have aged to about his mid-twenties instead of his teens. If it weren't for the cracking voice, I would have expected him to have brought over a six pack of beer to share with mommy.

And finally, I was willing to overlook Bo Peep being in Storybrooke without us ever meeting her, but now we've got an ice cream shop with a villain at the helm? Why haven't they started a Storybrooke census by now? Something like:

I mean, really. They've got to get a grip on this hidden villain thing. But at least now we know that Hook can take Emma someplace besides Granny's for a date.

My episode rating: Four hooks out of five.