Project Bombshell: The Week One Results

I am officially down eight pounds since last week. Holy crap.

And no, I don't mean that literally. You'd think with all the extra fruits, whole grains and veggies I'd be in serious intestinal distress (at the very least, you'd think my bacon-loving insides would be scream WTF? at the top of their lungs) but I'm remarkably not having a lot of issues in that area.


Is it possible to have a delayed reaction to caffeine and sugar withdrawal? Have I got such a buildup in my body that it took a while to work through the stockpile I must surely have hidden in a buttock or in my thighs or something? Because I'd been feeling fine until it all slammed into me like a freight train on Sunday.

Advil barely knocks it back, too. It's been three days and I'm starting to think maybe I should have stepped it down first instead of quitting cold turkey. I am not loving this headache.

Breakfast: Fruit, fat/protein (which is either adding a healthy fat to your protein - like cooking your eggs in olive oil - or higher-fat protein, like bacon), grain and veggie.

Snacks are all veggie plus fat/protein

Breakfast was a real problem for this phase, mainly because I'm not the world's biggest fan of eggs. I want an egg once a week, tops, and in order to have veggies with my protein breakfast, I pretty much have to get an omelet or eat something weird. I threw a ton of veggies in my eggs on Friday, but Saturday I was over it and made salsa and eggs with broccoli on the side. 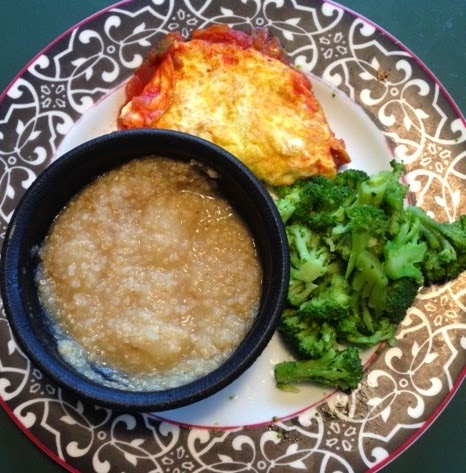 Let me go on record as saying here and now that there is something fundamentally wrong with eating broccoli for breakfast. There just is. And I  like broccoli. That stuff in the dish is a delicious concoction I came up with all on my own: Applesauce and quinoa. I use unsweetened applesauce, mix with equal parts quinoa and a half a teaspoon of stevia. It's actually pretty yummy, and fulfills my fruit and whole grain portion beautifully. It's got a great texture, too.

So there you have it - week one is done and while I can't say I'm loving this diet, I'm not really outright hating it, either. I thought I'd go crazy missing the dairy, but I'm really not. The sweet tooth is still calling out for vengeance and the caffeine headache may have me peeling my own fingernails off with a letter opener later, but I think I can manage. No, I'm not loving it, but I am loving the way the weight is dropping.

Email ThisBlogThis!Share to TwitterShare to FacebookShare to Pinterest
Labels: Bombshell