[This is a re-run of a previously published blog. I think it still says all I have to say today.]

We lay snuggling in my bed, our nightly ritual after bathing, putting on jammies, reading and discussing the school day. I’d put her brother to bed a few minutes before her, then we snuggled in under the big comforter and she picked a subject for us to discuss – another ritual. The sky is the limit, and the only caveat is time: ten minutes to be exact. Then I put her into bed with a kiss and an ‘I love you’ and a promise to meet up with her in my dreams that night. The night before we’d decided to meet in Egypt, to see the pyramids together. I hadn’t yet received the dream destination for the evening, but I knew she’d get around to picking someplace.

"So what’s the subject, Boo?" I asked, brightly, as I pulled her close.

"Holidays.” She said. “Like Labor Day or Thanksgiving. Why don’t we have the day off to celebrate 9-11?"

I stared at her, at a loss for a moment. Once again, I have to wrap my head around something enormous and make it understood in a way she'd understand. You’d think it gets easier as she gets older, but it doesn’t really. She understands more now, and it’s a fine line between giving her the answers she’s looking for and information overload.

"Oh, I meant the other word. You know…starts with a “C” and it means remember." She says.

"Yeah, commemorate. A girl in my class is going with her parents to some field to commemorate. She’s missing school that day. We should all be off that day."

"Oh," I say, with realization dawning. "She’s going to Shanksville." 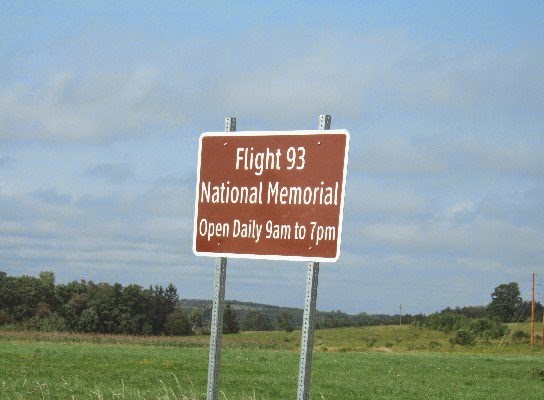 We live about 3 hours from the crash sight of United Flight 93, a lonely field outside of Shanksville, PA.

“So what was important about a field? Didn’t 9-11 happen in New York? And to Stephanie at the Pentagon?”

Stephanie is her cousin, and she was working at the Pentagon on 9-11. She survived, physically unharmed but mentally trying to make sense of what she lived through, as we all are. So I explain the story of United flight 93, how brave the passengers were in the face of a nearly certain death, how they fought with everything they had, how many countless lives they saved by forcing an airplane into the dirt instead of into a building. How proud their families and we as a nation are of them, and of everyone who showed bravery in overwhelming adversity that day. She asks for more stories, so I tell her about her Aunt, an EMT in nearby Virginia, and the work her unit did to help after the Pentagon attack. We talk about how the firefighters and policemen ran into the burning buildings in New York, when everyone else was running out. I told her about the two men who carried the wheelchair-bound woman down 80 flights of stairs to safety.

She asked if there were more stories, and I told her there were probably hundreds. We decided to look them up online, and read some more. Then she smiled and said "You know what would be cool, Mom? If someone on Flight 93 had found a four-leaf clover, and all of the sudden a bunch of parachutes appeared for them!" I ruffled her hair fondly and said "Yeah, that would have been great. It didn’t happen that way, though." Finally, she snuggled in with her back to me and I stroked her hair. I got ready to tell her something wonderful about her – something I always do before bed – praising her abilities or her good heart or her smarts. I want her to end her day with something good, always. I opened my mouth, and the words just poured out.

"Oh, Boo…it was an awful, awful day. So many people died, there was so much chaos….and the news – the news kept playing all night. There weren’t any other programs on TV, just pictures and video of people dying over and over and over again. I just kept holding you tight and hoping…praying….and thinking of your Aunt Sue. I kept praying “Please God, don’t let it be her child.” And I knew that all over America, thousands of mothers and fathers were praying that same prayer and they wouldn’t get the answer they wanted. Most of all I wondered what kind of a world you’d grow up in – a world where people could do something like this. I know, people do horrible things to other people all over the world every day, but we all felt it would never happen to us, and it did. It did, and everything changed and all I could do was hold you and hold you and promise that I’ll put myself between you and danger any way I can, for as long as you need me to. I promise, Boo. Always."

She rolled over in my arms, hugging me tightly. "You can’t stop bad things from happening, Mom. And when stuff happens, you just have to be one of the brave ones. That’s what I’d do."

In that moment, I realized why I clung to her so tightly that day. It wasn’t just that she was my only child at the time, and a baby, at that. It wasn’t fear for my life, her life, or the lives of my loved ones. It was what she represented in those hours.


And as the years go by and we take the lessons of that day and teach them over and over again, we raise a generation of children who will do what needs to be done, when it needs to be done, because they will be the brave ones, just as many were before them.

I laid her in her bed, kissing her again, and she said sleepily, "Mom, I think we should go to that field tonight, in our dreams. Maybe we can tell them all thank you."

Email ThisBlogThis!Share to TwitterShare to FacebookShare to Pinterest
Labels: 9/11, Anna