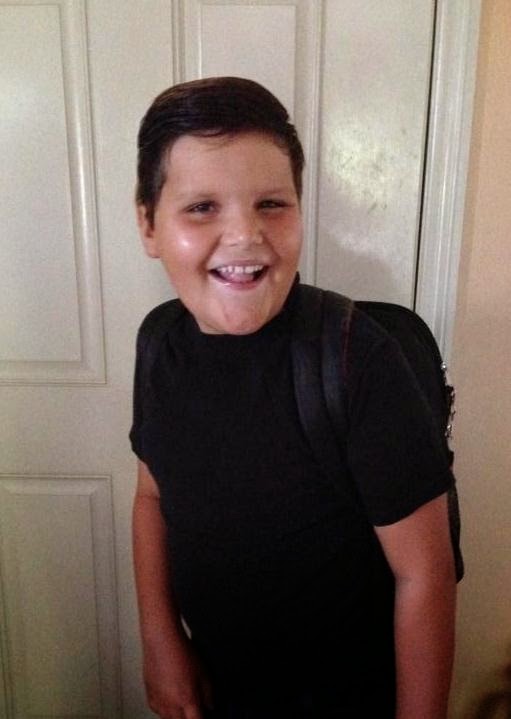 That was David at eight-fifteen this morning, turning to tell me to hurry up so we didn't miss his bus.

And there I was smiling and nodding, reminding him again of what his homeroom number was, drilling him on his teachers, their classroom numbers, where things were in his new and oh-so-heavy zippered binder with all the pockets and files and accessories enclosed.

I told him that I didn't know if they'd have somebody there to help just him, but he could ask any teacher, and they'd help him find where he needed to go. Just show them your schedule, David? Remember your schedule? Remember where I put it?

And just that fast, the bus was arriving, and he was climbing on, and off he went, to his first day of Middle School.

His first day trying to learn how to work a locker and remember a combination, wearing his new shoes that I noticed him walking kind of funny in. He told me they were pinching his pinky toe, so I loosened the laces a little, and then I told him if it was already hurting, it would probably hurt a lot more by the end of the day and maybe we'd better switch to his other sneakers. He wouldn't hear of it. He'd picked these out himself, because they were Converse, just like his sister wears.

And I worry that he'll get a blister. That his toe will hurt more and he won't be able to concentrate on what his teachers say. That the overwhelming flow of kids in a hallway, jostling and shouting and laughing and pre-teen girls wearing two dozen different types of perfume will be too much and he'll stand alone, hands over his ears, eyes squeezed tightly shut until someone notices and helps him.

Or makes fun of him. This is middle school, after all.

And then I take a breath, and I let it out slowly, and I repeat the mantra I repeated all the way back from the bus stop. He'll be okay. He'll be okay. It's going to be okay.

I remind myself that I had these very same worries, his first day of kindergarten. He found his way then, and he will find his way now. Back off, Mom. Let the kid unfold those wings and fly.

It's too late to knit that safety net. He's too far gone for that. He's ready for this.