I Had Been Saving This For A Future Blog, And Now I Don't Even Want To Use It

I saw it originally on Reddit, I think. I read it, and I thought, "He's right."

My second thought was "Well, the man is a freaking genius, of course he's right." 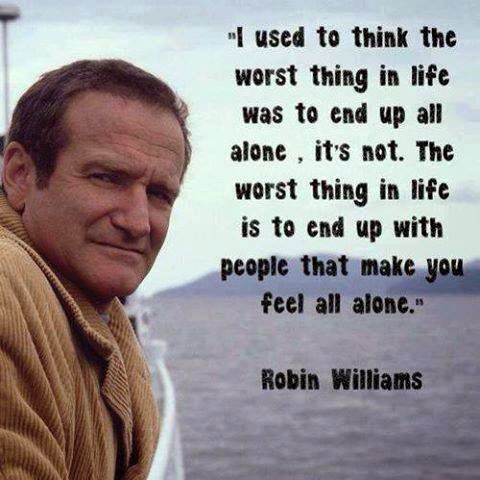 I'm not going to give you a lesson on the lies depression tells you. The isolation your mind enforces on you. The pain of realizing that fame and money and accolades mean f--k all in the face of a pain that's eating your soul for lunch.

I'm a lucky girl. I've never battled clinical depression. I've had a few rough patches in my life, but that's all they were - weeks, not months. Not years. I've never thought more than fleetingly about taking fate in my own hands and removing myself from the madness.

But I've got friends who did, or still do think and feel that way on an all-to-frequent basis. And I feel as they do.

Helpless in the face of it.

But I'm here for them, and I always will be, as much as I can and they need me to be.

I'm  a loner by nature, and I've never had a problem being alone. Alone isn't necessarily lonely. Not unless you have a reason to be lonely.

And feeling that kind of loneliness in a room full of people is a pain I can't imagine living with. It's hard enough just thinking about the occasional brush of it.

Robin was a genius, and as with many who burn too brightly, the darkness surrounding them can go unnoticed.

But they feel it.

Email ThisBlogThis!Share to TwitterShare to FacebookShare to Pinterest
Labels: Blogging