My brain is a vault of information - mostly useless trivia, I'm afraid, but occasionally, something interesting makes its way in there and takes root. And since today is an overcast, gunky sort of day around here, my brain is flitting to the esoteric instead of slumming on a beach somewhere.

So without any further ado, here's a list of really cool stuff I've either learned or been reminded about in the last week or so:


1. At one time in our history (approximately 70,000 years ago) the human race was down to 10,000 people. Scientists theorize that this was due to a supervolcano erupting, and the idea is staggering. The entire human race - the entire population of the world - at 10,000 people. Here, this will help you wrap your mind around it: 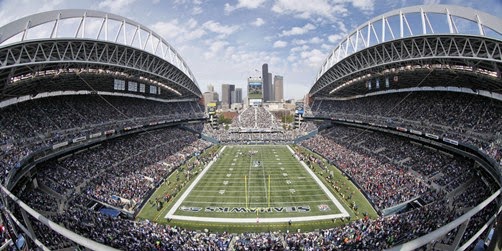 Picture this football stadium mostly empty. With 10,000 people, only one in seven seats would be filled. The whole population of the earth, and it couldn't even fill a football stadium. Does your existence feel precarious now?

2. Al Capone is the reason we have expiration dates on our milk. Seriously.

3. Marvel invented a superhero that wears hearing aids just for a little boy who didn't want to wear his hearing aids. How awesome is that?

4. During the 1800's, a baboon was employed by the Port Elizabeth Mainline Railroad as a signalman. He never once made a mistake and worked for the railroad until his death.

5. Here's one for all the nerds out there. Who bought the first ticket to the first  New York ComicCon in 1964? George R.R. Martin.

That's just a smattering of the stuff frolicking around in my brain this week. Hope you enjoyed!