On July 4th, we joined them at a neighborhood party which was a serious thrill for my kids because of the level of fireworks involved. In that part of Kansas, they can buy all sorts of great fireworks at roadside stands that are firmly outlawed in our home state.

While we were at the party, the kids were firing things off under the watchful eyes of several parents, and I found myself jumping out of my chair when my brother handed my son a lighted punk and told him to go ahead and ignite a fuse. Holy cow! He just handed my autistic kid a piece of fire and walked him over to an explosive device. Was he nuts????

He reassured me that he was watching every move that David made, and I bit my lip, had a short talk with David, and then I let them go. I sat in my lawn chair, fingers curled hard around the armrests, and watched. Anna was setting off the occasional smoke bomb and a few Roman Candles, but for the most part, she was hanging back.

Not David, though. He was right in the middle of it, and he was having the time of his life. And really, what ten year-old boy doesn't want to blow stuff up? And under his uncle's watchful eye, he lit and exploded and cheered and happy danced and squealed and did it again and again. He high-fived everyone in sight and his only injury was a very small blister on one hand that he didn't fret about for more than thirty seconds. 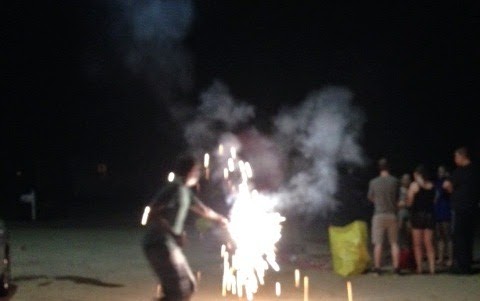 He talked about it all the way home, too. And again when it was time for bed. And the next day. He even mentioned it to me again this morning, because he can't wait to tell everyone at camp about the fireworks show that he helped to put on.

And if it had been up to just me, he never would have done a bit of it.

I wouldn't have been able to let go, and trust that just like any other pre-teen boy, he could safely blow stuff up with proper precautions (and they did have precautions) and careful adult supervision. Not my David. Not my son, who has autism.

Sometimes, I forget David is exactly what he is: a ten year old boy. He just happens to have autism, too. The latter does not preclude the former. Sometimes, I need to just let him be a boy.

Of course, I did have a firm talk with him at bedtime that night about how we only blow things up on certain special occasions and only when there's an adult around to help you, and we never, never play with fire any other time. He just smiled big and said, "I know that, Mom."

Yes, he does. And that was his polite way of saying, "Back off, Mom. You're harshing on my happy."

So this is me, occasionally backing off. We'll see how it goes.