Can You Smell What I'm Cookin' For The Rock? My Big, Glistening, Sweaty Hercules Review 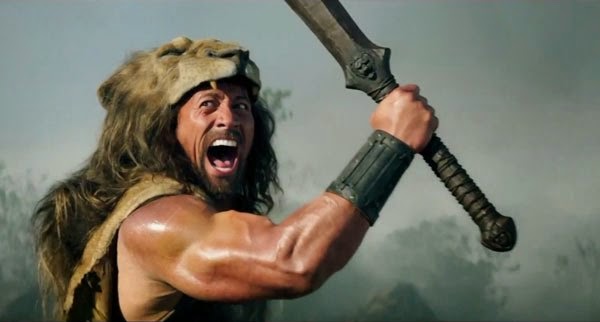 
I saw Hercules on opening day. I know. Contain your surprise.

Friends had actually warned me off of it. Ha! I laugh in the face of their movie snobbery. This is The Rock. I would pay to see him read a grocery list. Preferrably shirtless, but still, this man has my undying lust loyalty and that's that.

So here's the deal. I was warned away from the pic because it really doesn't treat the subject matter with any kind of adherence to Greek mythology. In fact, it paints good old Herc as a regular guy, who's been the subject of some seriously good PR and hype - hype which he wholeheartedly approves of, since it gets him and his traveling buddies more work.

And you know what? I'm okay with that. I actually think it's an interesting angle, and I liked it. It made for a laugh here and there through the movie, and it gave Herc a kind of everyman-with-enormous-bulging-biceps quality that made him more relatable.


And as for his traveling buddies - I liked them. Atalanta was a particular badass and I guess she provided the leather-clad miniskirt sex appeal while Rock just looked great glistening all over the place. The kid who played Iolaus was also some pretty nice eye-candy geared toward prowling cougar women and girls my daughter's age. I can appreciate him, but I feel dirty for it. The entire group works well together and there's a comaraderie that goes with years of being together in a family-ish unit, and they play it well.

But by far, and without a doubt, hands-down, the best bits in the movie belonged to Ian McShane, whom I have loved with a fiery passion since his days on Deadwood. He stole the movie and I loved that he did.

Which brings me to my only real criticism here (the beginning was a bit slow, but I forgive them for it as the movie picked up steam and got better as it went along). My only real beef with the movie was that they completely wasted Dwayne Johnson as a comedic actor. I realize this was a serious role, but Dwayne has a marvelous sense of comedic timing, and it wasn't used much in this movie. He was pretty much the straight man throughout, with only an occasional glimpse of that fabulous fun he usually brings to a role. I think they could have thrown more his way, and the movie would have been the better for it.

All in all, I'd give this movie a hearty thumbs-up, and that's not just because of a glistening, loincloth-clad, lion-skin wearing Rock. But that part of it sure was nice.

Check out the trailer, if you haven't seen it already: