Mostly Wordless Wednesday: Like A Leaf On The Wind

Email ThisBlogThis!Share to TwitterShare to FacebookShare to Pinterest
Labels: MWW

Dear Daughter: You Really Need To Remember How To Say "I'm Sorry"

You really need to remember how to say "I'm sorry."

When I originally titled this post, it read "You really need to learn how to say 'I'm sorry'," but I reread it and it didn't sit right with me, mainly because you did learn it. I know you did.

Being your mother requires that I teach you so many things, to the best of my ability. The lessons start young. Please and thank you. I need help, Mom. Let's share. We'll take turns.

Phrases you learn, phrases you apply, because they help you get along in this world. One of those critical phrases that you were taught from your earliest years was "I'm sorry." 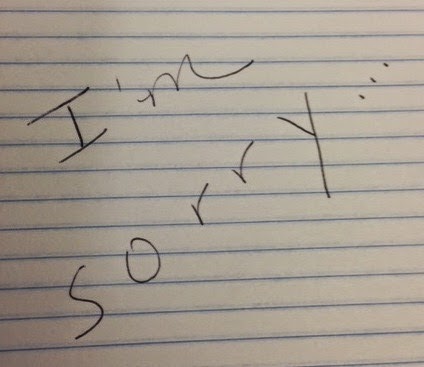 I don't care how awesome that Vine was that you just watched. I don't care if that girl in your Math class just posted a picture on Instagram and her hair looked cray-cray. I don't care if One Direction just stepped in front of the vehicle and I am about to slam into them at terminal velocity.

Once Upon A Time - Season 3, Episode 19 Recap: Footwear Is Powerful Magic, People

We begin in the Enchanted Forest during the forgotten year, and Snow and David (along with Aurora and Philip) are preparing to announce publicly that the Prince's seed has found purchase in the fertile field of his wife's womb. Regina's in a gorgeous gown, but for some reason, they've got her in this blinding white kabuki-style makeup that just looks really...odd.

Anway, Belle shows up and tells them all about Neal's effort to resurrect Rumple and that Zelena now has the dagger. Aurora and Regina tell Snow (looking resplendant in her maternity wear) that now isn't the time for a baby announcement, but Snow won't hear of it. She wants to proclaim her bloating belly and swollen ankles to the world!

That's when Aurora confesses that the witch is after a baby, specifically Snow's baby - mainly because Aurora and Phillip totally told Zelena they were here.

Zelena promptly turns them both into flying monkeys and freezes them all in place while she fondles Snow's belly in a really creepy way.

I loved Frozen. I really, really did. Great songs, great story, wonderful humor...but when all is said and done, there's only one Disney Dude for me. So allow me to present just a few of the reasons why Kristoff is sweet, but my heart belongs to Flynn Rider:

Mostly Wordless Wednesday: All I Ever Really Needed To Know About Parenting, I Learned From The Far Side 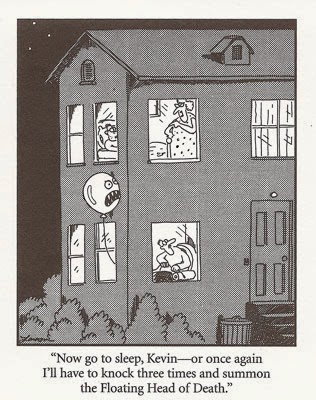 Hey you! Want to do something cool for Earth Day and be part of a wonderful project that NASA is putting together? Then print out one of these signs, fill in your location (or make your own location sign in any creative way you'd like). Email ThisBlogThis!Share to TwitterShare to FacebookShare to Pinterest
Labels: News

I Meant To Write This A Week Ago, But I've Been Busy...Writing!

I want to give a big shout out to The New York Writer's Workshop, for their excellent Fiction Pitch conference.

I got some solid mentoring and advice from my facilitator, the incredibly astute Allison Estes, and valuable feedback from both my peers and the editors and agents they set me up to interact with.

And not for nothing, but I walked out of there with multiple agents and editors requesting my full manuscript after I'd had a chance to pitch them.

I found the whole process to be a great learning experience, and a solid opportunity for me to get in front of people that matter when it comes to my manuscript. They were a class act all the way, and I very much felt it was worth the money.

I would recommend the experience to anyone.

Once Upon A Time - Season 3, Episode 18 Recap: Sometimes, Dead Is Better

We begin tonight with Regina, being paid a visit by her dear older sis, (bearing a basket of tart green apples, no less). Zelena starts in with her whining and Regina snarks about her envious ways. They hem and haw around each other until Zelena admits why she's really there: as a distraction, so that Rumple can take her heart.

Over in the woods, Rumple is confronting Robin warning him away, when Roland shows up. He tells Robin that he doesn't want to hurt Roland, but when Robin fires his never-miss arrow, Rumple redirects it toward Roland, holding it in mid-air until Robin hands the heart over.

He apologizes, takes the heart and leaves, dropping the arrow before it can hurt Roland. Regina shows up and Robin apologizes out the ass but Regina's just glad Roland is okay. Regina points out that she's still alive, which means Zelena has taken the heart for a far worse purpose.

Email ThisBlogThis!Share to TwitterShare to FacebookShare to Pinterest
Labels: MWW

Sharing Because This Is Made Of Pure Awesome: "To The Boys Who May One Day Date My Daughter"

I Still Haven't Found What I'm Looking For

Life, it seems is moving forward.

My Son Had A Fever, So We Had A Conversation 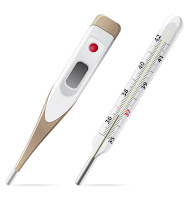 My son was sick on Tuesday. Oh, it was nothing traumatic - a simple virus that stuffed his sinuses and gave him a cough, and along with that came the fever.

The school nurse clocked him in at a respectable 103.6 degrees Fahrenheit, so I left work and he left school. And once I settled him in the car, I got to talk to my son.

21 Girls Who Don't Know What Eyebrows Are Supposed To Look Like.

Enjoy. Just try not to shudder when you close your eyes tonight.

Two Middle School Boys Were Making Fun Of My Son, So I Became An Angry, Snapping Autism Mom

Saturday was quite the day.

My daughter Anna just celebrated a milestone birthday, and to mark the occasion, I took her, her brother and her best friend to an indoor waterpark for the day. We closed the place down, and took our tired and hungry selves off to a big chain buffet-style restaurant that happened to be across the street for dinner.

The hostess seated us at a table next to two boys who were around Anna’s age - probably no more than 14. David was sitting next to me facing them and they were laughing at him and making fun of him because he was acting sort of goofy. He was having tremendous fun playing with the stuffed Teenage Mutant Ninja Turtle that his sister won for him in the claw machine.

Once Upon A Time - Season 3 Episode 16 Recap: Never Bring Your Heart To A Witch Fight

We begin tonight with Zelena's backstory. She's been dropped as an infant via cyclone in the woods of Oz, where a married couple (who are enroute to the Emerald City) find her. The woman takes her in, over the man's objections - and the man has good cause to object. Baby Zelena drops a tree with a wave of her hand.

Forward to present-day and Neal's funeral, where one by one everyone's looking down at the grave camera and tossing in a spadeful of dirt to obscure the lens. Everyone is lost in their own misery, except for Regina, who is clearly lost in Henry's. It's a beautiful touch to add to the scene.

Across town Zelena is taunting Rumple about how he went through all these machinations, waited all this time only to badly fail his son.

"Tell me Rumple, was he really worth all that trouble?" she asks.

A heartbroken Rumple replies: "Every bit of it. He was family. Something you know nothing about."

No Words Really Necessary - This Is Beautiful. Let It Go: The Autism Version

April Is Autism Awareness Month, So Let Me Tell You About My Kid - The One Without The Autism

Hi Everyone. This is my daughter, Anna
. 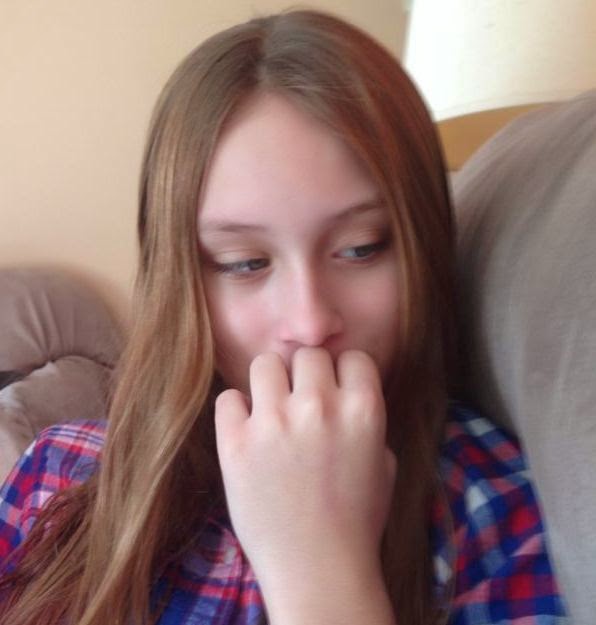 She's thirteen years old today. Thirteen is a big birthday, don't you think? And as the mother of a teenager (!) now, I think I need to call attention to that.

More importantly, as the mother of another child who happens to have autism, I need to call attention to this fact today. Because today, through no small act of coincidence, is World Autism Awareness Day.

This One's For My Beautiful Girl.

World Autism Awareness Day: Let's Not Forget The Amazing Sisters And Brothers Of Kids With Autism! 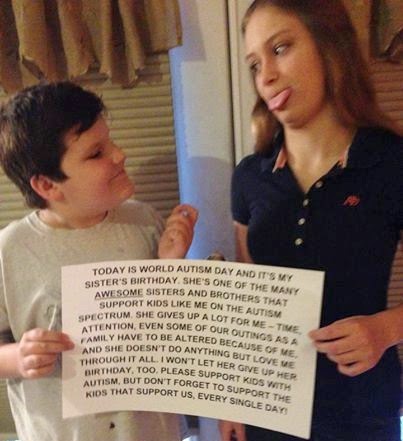 It's April Fool's Day! Show Me (Or Tell Me About) Your Favorite Pranks!

Here's the one I unleashed on the kids today!