The Kind Of Person That You Are 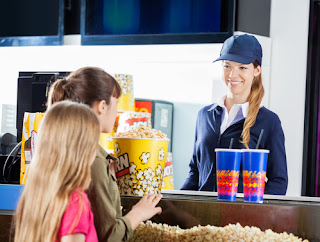 I took my kids to see a movie last week, and since the place was packed, I sent them ahead to get seats and I stood in line at the counter, wondering how I was going to juggle three sodas, a giant popcorn, pretzel bites, and Junior Mints through a jostling crowd without any help.

There were probably twenty people behind me in line, and with five minutes till movie time, I was finally one away in line from the counter, when the lady in front of me suddenly lost her mind.

First, the nacho chips were not as fresh as she'd like. The cashier assured her that as busy as they were, they'd been opening bags at a rate of two an hour to restock them, but she made him open a new bag anyway.


Then she wanted a certain kind of candy that she didn't see in the stands outside the counter. Cashier again told her that they were very busy (and that's a hint, you idiot woman) and they were selling out of things. She told him to go check the back. He did and they were still sold out.

She also waited until he poured all her sodas before she told him she didn't want them to have any ice.

When she finally left the counter, I was ready to trip her on the way out, but I knew that would only lead to her demanding that he do it all over again, so I restrained myself. Barely.

And the worst part is, this woman will never see herself as everyone behind her and the cashier in front of her saw her. Never.

Those chips would have to be painfully stale for me to turn them back in, and I'd be doing it with a huge apology for the inconvenience. If I didn't see my favorite candy, I'd be choosing something else instead. And if I forgot to tell you how I wanted my drink, I'd drink it the way you made it. Just because.

There's nothing wrong with asserting yourself sometimes. My parents were the kind of people that would never make a fuss over anything - bad service, bad food, you name it. It would have embarrassed them to do it.

Me? Well, if the food is bad, I send it back, with an explanation. It doesn't happen often, but I do. If the service is bad, I look at all the other factors - is the kitchen backed up? Do they look like they're shorthanded in the restaurant or store? If the service is moderately bad, they still get a decent tip  because I believe everyone deserves to have an off day sometimes and lord knows this country pays crap wages if you're a server. If the service is abysmal, I speak to a manager, because if it were my restaurant or store, I'd want to know.

As a customer, I may be entitled to having someone go "above and beyond," but I'm just not enough of a self-entitled jerk to demand it on a regular basis.

Because that's not the kind of person I want to be.