My Son Wants A Little Brother, But This Baby Factory Is CLOSED 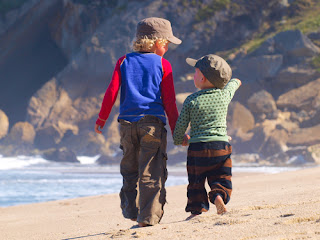 I brought it all on myself, I suppose, thanks to the Wal-Mart five dollar video bin.

Whenever I have a kid-free weekend and I'm at Wal-Mart (which happens to be the major grocery store in my tiny little town), I take the time to dig through their five dollar video bin in hopes of finding a hidden gem. It's hit-or-miss, but sometimes you get lucky.

That's where we found a new copy of The Princess Bride when the old one got too scratched. That's where I found Cloud Atlas and Amelie and Forrest Gump. And a few weeks ago, I hit the motherlode again and found "Zathura: A Space Adventure."

It's a wonderful movie (from the people who gave us Jumanji) about two brothers playing a board game involving a space adventure that ends up becoming real. It's tremendous fun, and the story that evolves between the brothers is heartwarming and wonderful. We had a family movie night to watch it, and ever since then, my son's been hooked on it.

And when I say "hooked on it," I mean this is a kid with autism and he watches movies over and over and over and skips back to hear his favorite lines repeated again and again and he'll even spend an hour or more just watching the DVD menu on an endless loop.

Except, there's a problem. He's identifying really strongly with the older brother, so much so that he's decided he's missing something in his life: A little brother.

So he approached me a few days ago and made his request.

"Mom? I need a little brother. We can get me one." His eyes were earnest. See Mom? Easy peasy. Like we can go to the Little Brother store down at the mall and have one packaged and ready to go in minutes.

I hate saying no to him, but this is reality, after all. Mommy is past her ovulatory prime. Mommy is a single Mom with two jobs and a huge mortgage and she struggles taking care of the two kids she's got. Mommy has a preteen girl who looks twenty and a special needs kid who thinks brothers grow on trees. There will be no more babies.

So I held him close and told him gently, but firmly that Mommy can't have anymore babies. His answer was to smile at me really big and say:

"Yes, you can. You can go to the doctor and he can pull one out of you."

"It doesn't work like that, honey." I smiled apologetically. "I can't get you a brother."

I'm not about to get into the logistics of babymaking with a ten-year old on the autism spectrum. And really, this isn't about me having a baby so much as it is a plea from him for something else - a playmate that won't outgrow him.

All of his neighborhood friends have done so in waves - first the ones who were born the same year as him. They moved past Barney and the Wiggles and don't play with action figures much anymore. Next year, they'll be in middle school, and he'll still be doing those things.

Then came the next wave a couple of years later. They're all talking about their favorite TV shows and monster trucks and iPad apps and going to tee ball and soccer. And they outgrew the strange kid who sings at the bus stop a couple of years ago. Even this year's crop of kindergartners are moving past him, eager to catch up to their older siblings.

And the one person who's been a constant in his playmate universe, his sister, is nearly a teenager now. Her world is filled with her iPhone and her hair accessories and her school activities and boys. She still hangs with David and plays with him on occasion, but it's rarer now, fit in around all the other things that I would never deny her a chance to experience.

Because he wants the one that will never grow up. The one that'll remain fun and unspoiled and laugh when the rain hits his face and sing out loud when he feels like it no matter who's looking at him. The one who takes his action figures on grand adventures and won't tell you that you're too weird to play with.

And I'm honestly more than a little sad that I can't give him just that.