They Were Making Fun Of My Son So I....Did Nothing 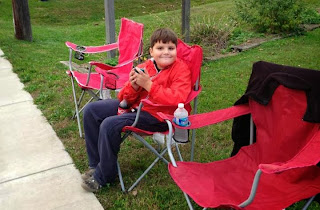 One of our biggest annual events in our small town is the local Halloween parade, and that's where the kids and I were, relaxing in our folding chairs, lined up on main street, ready for the lights and the music and most of all, the people throwing candy!

We had to get there early to stake out a good spot, and with some time to kill, Anna wandered off to go find some friends in the crowd and David decided that the big green lawn of the Township building behind us was a terrific place to pretend he was in an ocean, swimming away from sharks.

This is one of the definite perks of having a child with autism - they don't mind playing by themselves. David was happily doing so, until a large group of unfamiliar kids decided the lawn was a great place for them to play, too. Most of them were his age or a year or two older. They must've been visiting from the next town over, which is in another school district, otherwise they would have known David instantly. He's like Norm from Cheers - kids shout his name wherever we go. Mr. Congeniality - that's my David.

Well, it didn't take long for them to figure out that he was different. David doesn't act or communicate like a boy of nearly ten most of the time. They watched him curiously at first, then when he tried to get them to play along, I held my breath and tensed up, ready to swoop in, if necessary.

A few of them joined in, pretending to be sharks and chasing him as he laughed and whooped and evaded. They'd engage with him for a bit, then run over to the bigger huddle of kids on the sidelines.

And there they'd talk about him. I heard every word.

I put the soda I was holding down into the cupholder of my folding chair, and I prepared myself to walk over there and educate some kids. Firmly. And then, it happened.

A few of them peeled off again, running over once again to play with David. His glee was contagious, and they couldn't help but laugh at him, and then laugh with him.

Anna walked up behind me, grabbing my arm.

"Mom! They're over there making fun of him! You should hear what they're saying!"

"I know, honey. They don't know him. They're not from his school."

"I don't care. You should say something." She tapped her foot impatiently.

Two or three more kids had peeled off the larger group, and now David had a small army chasing him over the grass, clapping their arms together up and down like shark jaws as he laughed and shouted and he flailed his arms like he was swimming. They all ran and they all laughed. I'm not even sure they knew how they'd been sucked into this silly game, but they were having fun. So much so, that when David asked them to take a rest so he could go get a drink, one of the boys said "OK, but you better come back!"

He did. He did and they laughed and chased and invented new games and David enjoyed it immensely, filling up the time until the start of the parade. There were still a few who hung off to the side, making derogatory remarks, laughing at the foolishness of their friends playing with the weird kid.

"I still think you should go over there," Anna said, mulishly.

"I could. Believe me, I'm fighting the urge. But the truth is, if I do, they'll stop playing with him. And he's having so much fun."

"But they're talking about him!"

"Maybe he does. You always say he hears everything we say," she pointed out.

"He might have heard. If he did, he just doesn't care. He's having fun with the kids who don't care, either. I'm not going to stop that, even though it's not an ideal scenario."

The parade started shortly after that, and David gleefully chased down the tossed candy with the rest of the kids. When the fire engine cruised by and started up its sirens and lights, he dropped his candy bag, clapping his hands fiercely over his ears and closing his eyes tightly. He screamed for me - the sensory overload was just too much. And as I raced forward, one of the other kids picked up his candy bag for him, handing it to me. His friend looked at David nervously.

"He'll be fine," I said. "David has autism, and sometimes loud noises and bright lights are hard for him. His brain processes them differently and it's like they're amplified a thousand percent."

Their eyes widened. I rubbed David's back soothingly until the fire engine was far enough away that I could gently move his hands off his ears.

One of the boys stepped over to him with a handful of candy.

"Here," he said. "They were throwing this. From the fire engine. I got a lot."

So I took my son to the Halloween parade, and he laughed and he played and he watched the parade go by and he got a lot of candy. As far as he's concerned, it was a perfect night.

Perfect is in the eye of the beholder, I guess. In the world of autism, perfect isn't so black and white.