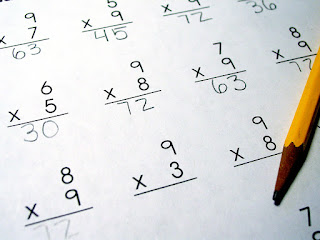 He sits at the table with his fists jammed into his eyes.

"It's too hard. I want to only do a little. It's too ha-rd." His voice catches on the last word, and his fists twist into his eyes, trying to stem the tears.

I mean, I really, really hate math. I've hated it all my life. It never was a good subject for me, and quite frankly, once I learned basic addition, subtraction, multiplication and division, I found math to be a colossal waste of my time and energy.


I remember the old movie "Peggy Sue Got Married", a wonderful flick about a middle aged woman who travels back in time to her high school years but with her adult memories intact. There's a moment where she's in math class and she stands up and says to the teacher "I happen to know that in the future I will not have the slightest use for algebra, and I speak from experience."

In my case, that is most certainly true. My career choices have not needed anything more than basic addition,subtraction, multiplication and division, and I've gotten by just fine. And with the advent of calculator apps on phones and cheap plastic calculators in the dollar bin at Wal-Mart, I don't even have to do too much of that in my head anymore.

And thank God for that. Because I hate math.

Somehow, when I birthed my daughter, the I-hate-math-and-struggle-with-it gene skipped right over her. She loves math. Loves to see endless chains of numbers, pull them apart, recombine them, see what makes them tick. Her mind is four steps ahead of any equation, and she officially tested out as "gifted" in Math in the fourth grade.

Which is great, because I have almost never had to help her with her math homework. It's even greater for her, because she's now in seventh grade, and I assure you, I would be no help at all.

Oh, David, my darling boy. Not only does he have those unique genes that say he is a child with autism, but he's got his mom's I-hate-math-and-struggle-with-it genes in abundance. It's like he sees a column or a row of numbers and his brain turns them into a brick wall that he consistently beats his head against.

Last night was no exception. I stared at the page of equations - what seemed like an impossible number of them for a boy who takes nearly a full minute to painstakingly scrawl his name at the top of the page. I want to scream "His brain doesn't work this way! It just doesn't!" I want to smack someone in the face and remind them that this is the 21st century, and David will most certainly have handy and close access to a calculator or a calculator app on a phone when he's an adult, navigating the world.

That's our code. "Hey, you" wakes him every morning, followed by a kiss. "Hey, you" gets his attention when he's doing something great, and it's often followed by "High five, buddy!" "Hey, you" means he is loved, and he knows this.

His big, brown, tear-filled eyes raise to mine, and I smile at him. "It's OK. I promise it is. We'll figure this out, you and me."

"I know it is, but remember how it used to be hard to ride a bike with two wheels? Do you remember? You used to say you couldn't do it. And you used to get really mad."

He nods, swiping at his eyes.

"And now you can do it, and it's easy, because you practiced a lot. Even though it was hard and it scared you a little, you practiced, and it got easier. Math is like that." I reassure him, but my mind is thinking: Yeah, until it gets harder again. And still harder after that until you finally graduate and hopefully never have to navigate a wall of numbers (and letters - God help him when they add letters) on a piece of paper again.

He nods once more, picks up his pencil, and tries again. Because David always, always tries again. This kid just plain doesn't give up, even when the odds are stacked against him. Even when this sucks as hard as anything can suck when you're nine years old. Even though he hates this stuff as much as I do.

He looks up at me again.

"Do you know, when Mommy was nine, she didn't like Math, either?"

"We can do this, David. We can figure it out, and you can practice, and it will get easier."

He put his pencil to the paper again, and we leaned our heads together, and the world got a little smarter, because we were in it together.