Movie Review: Percy Jackson and the Sea of Monsters 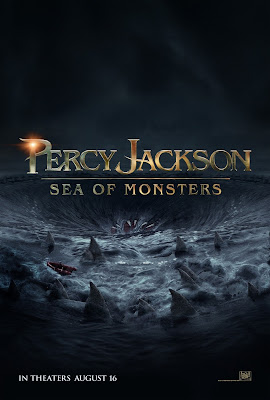 I took the kids to see the newest Percy Jackson movie tonight, expecting an adequate flick, because, let's face it, that's what the first one was. And even though it has one of my personal cougarish I-know-it's-so-wrong-to-look-at-him-that-way crushes (Jake Abel), I wasn't expecting to be wowed.

Surprisingly, I was kinda wowed.

The story line was solid, and the special effects were far and away much better than in the first movie. Add to that an awesome cameo by the gorgeous Nathan Fillion (who tosses out a Firefly reference that made me laugh out loud) and you've got a good flick. They left it wide open for a third installment, and I hope they decide to make one, after seeing this one.

The only downer in the movie was the character of Annabeth. In the first movie, she was such a kick-ass girl, easily able to whoop not only monsters, but Percy as well. In this movie, she seems to fall down a lot, get knocked on her ass a lot, and be swatted at by monsters a lot, and every single time she screams for Percy and is, of course, helped to her feet by Percy. What the hell? What happened to Annabeth?

They do introduce the ass-kicking Clarice, daughter of the God of war, so at least we have one tough female. They made her a complete jerk, too. Oh, well.

All that nonsense aside, this was one rollicking fun ride of a movie. I took both kids and they both enjoyed it tremendously. Big thumbs up from all of us!