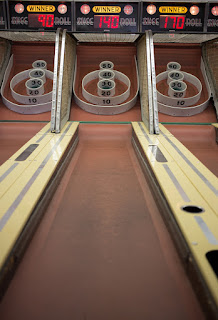 Hi there. Remember me? I'm the one who got hit in the back of the head with the heavy wooden skee ball you let your toddler throw. I'm also the one who gave you the dirty look as you retrieved it from between the legs of another child at a neighboring game and handed it back to your toddler to try again.


Of course, your son looked about 18 months old, so getting the ball up the skee ball alley and actually into one of the scoring holes was out of the question, especially since the ball weighs 1/4 of their total weight anyway. And, y'know, motor skills being toddler level and all that.

But didn't little Jake look cute while he tried? Yes he did! Oh, yes he did! You kept telling him so, anyway. I'll have to take your word for it, because once I got skee-balled in the back of the head, I wasn't seeing so great.

And I also have to say that little Jake is obviously ready to take on the world. Why, while you were on your phone (sitting right on the skee-ball lane, so no one else could use it), you let him wander around since he's obviously able to fend for himself. And fend he did! I watched him drink someone's soda left at their table, play with another kid's toys, and eat a french fry off the floor. There's no doubt the child will be able to manage for himself, should anything ever happen to you.

He finally tried to crawl up into the skytubes, and of course, being a toddler, he was too small to reach the next level, or the next that would safely allow him to get up there. This is where your mothering skills really shone! Why, the way you pushed him up by his diapered butt one-handed (because you were still on the phone, of course) and then yelled to all the kids on the upper platforms to "pull him up", was just inspiring.

You're raising an over-achiever there, for sure. Some people might argue that the steps up to the skytubes are farther apart because it's designed for kids who are a bit older. Those people are cowards. Your kid had a dream, and you made it a reality. Way to go, Mom!

And when it was time for you to go, I got tears in my eyes over the heartwrenching way you shrieked his name, over and over. "Jaaake! JAKEY! Jaaaaaaaaaaaaaaaaaaaaaaaaaaaaaaaaake!!!" Then again, after a skee ball to the head, every noise in Chuck E. Cheese was bringing tears to my eyes, but I digress.

Thank goodness you spotted him, climbing on the chair at that birthday table, trying to get a balloon. I have no idea why that mother didn't automatically offer it to Jake, especially since he was screaming and pitching a fit right in the middle of their Happy Birthday song. She must've been too busy taking video of her own child, who is, of course, not as cute as Jake.

I feel certain when I say that I will meet you again someday. I've certainly met enough mothers like you at places like Chuck E. Cheese. It's like I'm a magnet or something.

I only hope I'll remember you, and your darling Jake, when I see you again.

No guarantees, though. I did get a skee ball to the head, after all.