Once Upon A Time - Season 2, Episode 19 Recap: There's Something About Lacey

Tonight we start with Henry's birthday party, held for some reason at Gold's shop. Grandpa Gold allows Henry to pick out any present he wants from his shop and Henry picks a black wand. Gold uses it on Henry, turning him into ceramic, right before he takes his cane and smashed Henry to bits (by the way, this was an exceedingly cool bit of CGI).

And whooosh! It's all a dream and Gold is waking up in bed, grasping his chest in panic.
Off to the other side of town, where Gold is now looking on as Neal is pretend sword-fighting with Henry, and up strolls Regina. He lets Regina know that they are now related via Henry, and she's understandably freaked out to learn that Henry's birthfather is Gold's son. She points out that it can hardly be a coincidence, and Gold replies that it's not a coincidence, it's fate. And fate, he adds, clearly has a sense of humor.

"They won't accept you," Regina tells him. "I've seen your dark heart, and it always wins out. If your own son couldn't bring out the good in you, who will?"

Which sends us over to the hospital, where Belle is glad to see Gold alive. He apologizes for startling her, and tells her that despite her lack of memories, his feelings for her are unchanged. She asks if he can help her remember who she is, and he tells her the truth: he needs her more than she needs him. She helps him remember the man he strives to be.

We flashback now to the Enchanted Forest, where Rumple-the-beast is clearly irritated by a sobbing Belle, who's been crying through the night and disturbing him. In the middle of their conversation, we hear a shattering sound from another room. A man with a bow has broken in and is trying to steal the very wand that Rumple was dreaming about in the opening.

Oh. It's that Robin Hood.

Rumple warns him that stealing from him isn't a good idea, and the man nocks an arrow into his magical bow - an arrow that cannot miss. Unfortunately for him, it hits Rumple, a man who cannot die due to even more powerful magic, and the man is in deep doo-doo.

Forward again to the hospital, and Regina shows up to visit Belle again. Belle tells her that Mr. Gold is getting her discharged, and Regina bends over and picks up a pack of matches fro somewhere called "The Rabbit Hole." She asks Belle if she's dropped it, and as Belle stares at it, memories begin returning. Regina smiles a bit too smugly.

Over to Granny's now, where Greg is showing Tamara a map of all the places in town that he's spotted magic. He tells her to get back to Neal before he gets suspicious and confirms with her that she was able to "bring the package in" and it's stable. Tamara leaves, promising to deliver the package that evening.

On the north side of town, David and Snow have brought Emma to the secret location of the bean field, where she has a warm reunion with Anton. Emma is blindsided, and not too happy with this development.

"This world is my home," she says.

"It's been nothing but cruel to you," David points out. "If we go home, you might be able to have your happy ending."

Emma looks unsure, and needs some time to let this settle.

Back at the hospital, Gold is dismayed to find that Belle is missing from her room. He finds the matchbook, and heads over to the seedier side of Storybrooke, and into The Rabbit Hole. There he finds Belle - only now she's "Lacey," a booze-swilling, sluttily-clad (is that a word? Well, I say it is) chick who has no memory of  being Belle.

Flashback again to Rumple's castle in the Enchanted Forest. We hear screams from the dungeon, and then Rumple ascends the stairs, closing the hatch behind him. He removes his bloody apron, asking for a fresh one, then tells Belle he's off for a while. She castigates him for torturing the thief, and Rumple scathingly reminds her that no one steals from him.

She waits until Rumple is gone and then she frees the thief. He tries to get Belle to leave with him, fearing for her life, but she tells him she made a deal to serve Rumple and can't back out. The thief takes off and Belle waits to face Rumple's wrath.

Forward to Storybrooke, where a fuming Mr. Gold hunts down Regina. She points out that Belle merely has her memories back - her cursed memories - courtesy of the curse that he engineered. She points out that there's f**k-all he can do about it, too, since he's got to be on his best behavior in order to win his son back.

Gold heads over to Granny's and pulls David aside, explaining the situation with Belle. He humbles himself and asks for David's guidance, pointing out that even when their heads were filled with false memories, he and Mary Margaret still found their way to each other. How did they make that happen?

David quite reasonably points out that Gold helped his wife murder someone, so he's not really in a helpful frame of mind. Gold counters that if David does agree to help, for the first time, he's going to owe them a favor. David realizes this might be useful, and agrees. He tells Gold to show Lacey the man that Belle fell in love with, because there's still a sliver of Belle in there somewhere. 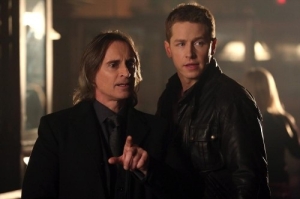 He and David head back to The Rabbit Hole, where Lacey is being hit on by the former Sheriff of Nottingham and drinking like a teamster. David encourages Gold to ask Lacey out and he hesitantly does so. She mentions that she's heard rumors that he's a pretty dicey guy, but agrees to see him at Granny's for dinner.

"Don Juan was nothing before he made his deal with me," Gold quips.

On the other side of town, Regina confronts Emma about the whole "Neal is Henry's father thing," and Emma points out she's been a little busy keeping Regina's mom from mass-murdering half the town and hadn't got around to telling her yet. Emma encourages her to stop worrying about everyone else and try focusing on being the person Henry wants her to be....before she loses him for good. Regina picks up on the inference, realizing that Emma is hiding something, despite her denials.

Later that night, a visibly nervous Gold is on his date with Lacey. Granny shows up to take their order, remarking "What the hell happened to you?" when she sees Belle in glittering stripperwear. Lacey brings up Gold's rumored sordid past again, and he blandly reassures her that he's a good guy. She lets a bit of the old Belle slip through when she tells him she doesn't think he's capable of hurting anyone, and Gold is startled and spill his iced tea on her dress. She heads off to the bathroom to clean up.

Flashback to the Enchanted Forest again, and Rumple discovers that his prisoner has been liberated. He's furious, of course, and takes Belle with him as he goes in pursuit, determined to kill the thief with his own bow. Belle tries to talk him out of killing the thief, letting him know that she doesn't believe he's as dark as everyone thinks.

Their carriage is stopped by the Sheriff of Nottingham, who upon seeing the thief's bow, offers up the name "Robin Hood" and says he knows exactly where Rumple can find the man. He quite creepily offers the information in return for a night with Belle. Rumple magicks out his tongue and offers to let him keep it if he gives the information, and will not even discuss the subject of Belle.

He locates the Robin Hood, who has stolen the black wand in order to heal his wife, who is gravely ill. Belle begs Rumple to stop, but Rumple gets all pissed off even though she reaffirms that she sees the good in him. Rumple seems to hesitate when he sees that the healed woman is pregnant, and Belle points out that he's not the type of man to leave a child fatherless. Rumple fires the arrow, but it misses, having been redirected by his magic. Belle impulsively hugs him, and he's smitten.

Forward again to Granny's where Gold is slowly but surely realizing that he's been abandoned, and this is confirmed when he sees the open window in the ladies' room. He goes around the back of the building and finds Lacey making out the Sheriff of Nottingham.

Gold pulls the man off her, and then he realizes with sickening clarity that Lacey was out there on purpose. She tells him that he's too milquetoast for her. She craves a more dangerous type of man.
Around front, David, Anton and the dwarves pull up to Granny's under the watchful eye of Regina. She puts a magical hand down to the street, and it reveals glowing tire tracks, leading her right to where the bean crop lays hidden. She's easily able to remove the enchantment, and realizes they're planning on going home, possible - probably - without her.

Back to the alley behind Granny's again, and the Sheriff of Nottingham is apologizing profusely to Mr. Gold. Gold takes his tongue again, with an ominous, "So no one can hear you scream..." before he starts beating the everloving mess out of the boy. Lacey interrupts, and it's obvious she's not upset - on the contrary, she's aroused. She likes the darkness and likes it a lot.

Flashback again to the Enchanted Forest, where Rumple and Belle are back at his castle. He takes her up a winding staircase, and at the top...the library full of books! Awwww!
He gives Belle free reign, provided she cleans in there as well. She takes his hand, proclaiming, "You're not who I thought you were...and I'm glad." 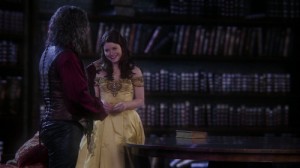 Across town at the loft apartment, Neal is bringing Henry home, slung over his shoulder and out like a light. Henry was playing in the park with newly-youthened August, and Emma reiterates that she really wish she knew who August was trying to warn them about.

And at the town line, Greg Mendell is waiting to welcome Tamara, who arrives hauling a trailer that contains the mysterious "package." They open the trailer doors, and shine a bright light on....Hook!!

There's just something about Hook all bound up...

I give this episode five hooks out of five.

Rumple was in his oily, evil glory, Belle was delightful and Lacey was awesome, CGI was good and they ended with Hook. Hook is back!
By Ellie DeLano - April 21, 2013