Yesterday, my daughter and a gaggle of her besties took to the mall in great glee for a birthday shopping extravaganza. Five girls and six hours and of course, I wasn't allowed to acknowledge that I even knew her during that period of time. She turned twelve, you know.

And while she and the girlpack were roaming around, I had to entertain a nine year old boy with autism at a shopping mall -  all day long.


Within the first half hour, we rode three escalators and two different elevators. Then we rode them again.

We stopped at a card store because he saw a stuffed bunny in the window that looked like a rabbit from a cartoon he loved, but once we got in the store, the smell of all the scented candles they were selling made him shake his head repeatedly, rubbing his nose as well.

Later, we stopped to toss coins in a fountain, in front of an expensive clothing store. Someone must've forgotten to remove a security tag, and a girl set off the alarm as she was leaving the store. A piercing siren had David covering his ears, running in place in agitation. We had to leave, before it got to be too much for him.

We did have a great moment at an indoor playground, where he ran and laughed and hooted and hollered with a pack of much younger kids who weren't always listening to his shouted directions. He stood atop the slide, trying in vain to herd them into some kind of posse, when he yelled in exasperation: "You guys are going to get us all killed! Or worse - expelled!" Yes, that's my boy. I think he can quote every Harry Potter movie, verbatim.

As the day went on, I had to keep reminding him not to run, which he pretty much always does. I didn't want him to run into anyone, which was a real possibility, since he decided the black tiles on the floor were water and he had to leap over them. He was running full out with his head down and I had to keep up. Which is hard, because Mommy is middle-aged and Mommy is tired.

We got lunch in the food court, but I had to choose our chair carefully, away from the too-smelly chinese food place and not too close to the loud teenagers enjoying their last day of spring break. One slice of pizza and a few french fries later, we were in action again.

We headed up more escalators and down more elevators, and made our way to a shining oasis in the middle of the mall - The Lego Store! Yes!!

Every so often, one of the employees would come by to see if we were doing OK or if we needed anything. One man, in particular - I think he may have been the manager - kept stopping by. After about an hour, I realized he was probably wondering why we had been there so long. What am I going to tell him? I had nothing to do but kill time until my daughter was done shopping, and my son has autism and loves to play with Legos. I did feel a bit awkward, though, so when he stopped by again, I said "We're doing great, thanks. And I promise, we'll buy something before we leave. He just loves this stuff."

The manager looked at David, then smiled warmly at me. "It's not a problem", he said. There was something in his eyes as he looked at my son. He paused a moment and said, very deliberately, "I've got a boy like him at home." He held my eyes a bit longer, still smiling. I smiled back. "Thanks." I said, and my eyes communicated where polite conversation could not.

Today is World Autism Day, and it's a day when we can all come together and make our voices known. A day when we don't have to keep to polite conversation or shoo our children behind us as we weigh the value of educating someone vs. turning our back on them so we can deal with a situation before it gets worse. A day when we can all talk about those boys (and girls) at home openly and freely and loudly so that all of you will hear.

I have a boy at home.

He and his sister are my everything.

He's different, but he's not less.

He matters to me.

He matters to the world. 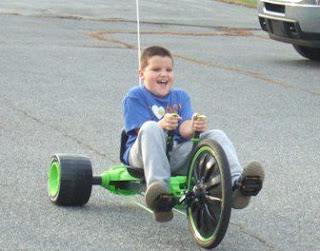