I Was Going To Blog About This On Friday, But, As Usual, I Procrastinated 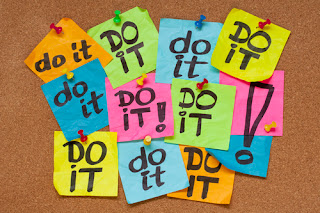 Hi, my name is Ellie, and I'm a life-long procrastinator.

It's been eleven minutes since my last act of procrastination, and I feel another coming on. I need an intervention!

Psychologists have been known to define procrastination as "the gap between intent and action". Mine is more like a chasm! It's not that I'm a total slacker, mind you. Things get done, but usually at the last minute, and not nearly as many of them as I had planned.


I seem to always have multiple irons in the fire and I'm in a constant pattern of derailing myself. I start out planning to organize a closet, then I get halfway into it and realize my kids have outgrown a lot of this stuff, then I start to pull stuff together for a Goodwill donation and realize that they have a ton of toys that could go, too, but I need them to sort out what they don't want to keep. Suddenly, I was looking at an enormous project that I certainly didn't have time or resources to address right now.

Did I get back to the closet? Nope.

And that, my friends, is the story of my procrastinating life.

Well, a few weeks ago, I got good and sick of it. I made a vow that I would plan my work and work my plan. I made a list, I worked on the list, and I refused to move on to the next item until the previous item was done, or the list was revised for good reason.

Surprise! Stuff got done! Isn't that crazy how it works? As the woman who puts the "pro" in "procrastination," I am still amazed when I think about it. So as a public service to all you other I'll-get-to-it-laterers, Here are my tips for getting your butt in gear:

Make that list - and keep it reasonable. Don't plan to take on the entire world, just a corner of it. And be specific! "I'm going to clean my house from top to bottom" is way too general. "I'm going to organize my upstairs closets, clean out the refrigerator, scrub the cupboard faces and re-paint the baseboards and windowsills in the kitchen" is a much clearer road map of what you want to do. If you're too vague, it's too easy to say "I don't even know where to start." If you're specific and list things out, you know exactly where to start: item one.

You need to also be sure that you celebrate when you finish what you started. It doesn't have to be extravagant. I have a friend who, like me, loathes any kind of yard work, but she loves the way freshly planted flowers and nicely weeded mulch beds look. After a morning of getting her hands dirty, she rewards herself with a mani-pedi at her favorite salon. I like to reward myself with movies - either out at a theater or on DVD or Netflix. Once I'm done for the day, settling in with a great movie and a sense of accomplishment makes for a terrific way to end a day.

3) Set a timer and work in bursts

I have a real problem with doing stuff I don't like: I flat out don't want to do it. Of course, I'm going to feel great once it's done, but that's hardly a motivator when you're on the not-having-started side of the equation. I've found that it helps to set a timer. There's light at the end of the tunnel if I only have to work on this for X amount of time. Maybe I'll break it up with half an hour on the internet (also timed!) or switching to a different task on the list, but breaking it up helps if the task is an especially big or daunting one.

4) Keep your options open - give yourself choices if you can

OK, so putting all the old photos into those dusty scrapbooks sounded fun at first, but you're good and bored with it now and it just seems like there's no end in sight. Pick part of the task, and do it. Sort the pics by occasion, or by person, or just by which ones get scrapbooked and which ones should be archived. Or put the whole project on hold till the following weekend, and get everyone involved to do it as a family project. Leave your options open, if they make sense. Just remember that "I don't feel like doing this right now" shouldn't be keeping you from doing at least some of what you planned.


Hopefully, my little tricks will work for you as well as they did for me...that is, if you managed to finish the article and weren't just planning to get around to it later.