Once Upon A Time - Season 2, Episode 15 Recap: Bad Blood And Killer Candles

We begin this evening back in the old Enchanted Forest with young Snow White, who is ready for her first birthday ball. Her mother (the breathtakingly beautiful Queen Ava) is prepared to give her the family tiara, but finds it being surreptitiously tried on by a servant named Johanna. Snow busts Johanna's balls over it, but gets jacksmacked by her mother, who makes it very, very clear that being royal doesn't give you carte blanche to be a jerk to anyone.
Snow is rightfully ashamed, and apologizes.Her mother reminds her that everyone is worthy of respect, and she wants Snow to always hold goodness in her heart and rule justly. A moment later, Mom lets out a gasp and collapses - showing us clearly that all is not well in young Snow's perfect kingdom.
Forward to Storybrooke, where Snow is clearly PMS-ing, because she's hacked at David for making her breakfast on her birthday (she prefers not to celebrate). David points out a strange, anonymous gift-wrapped package that was left outside their door for her, and despite the fact that people have been trying to kill them both for two seasons now, she just rips right in and opens it.
Inside the package is Snow's family tiara, and a note from Johanna, who is apparently in a town that's six blocks wide and in twenty-eight years, they've never seen her there before. Whatever.

Snow rushes off to see Johanna and David heads down to the Sheriff's station. There he's greeted with a tire iron to the face by Hook (who was obviously only showing bromantic affection in a time-honored Enchanted Forest way). Hook steals back his hook, and off he goes, presumably after Mr. Gold.

Snow finds Johanna planting flowers in what looks like the late fall judging by the leaves all over the ground and their breath clearly showing in the air. These are also some kind of magical snowdrops because Johanna says they can survive the harshest winter. They share a moment of shared memory over her mother.
Snow hears a weird sound in the nearby forest and takes off to investigate. What she finds are Regina and Cora, digging for the dagger, but with no success - Hook has apparently lied to them. Imagine that.
Snow overhears Cora's plan to use the dagger to force Rumpletstiltskin to kill all of Regina's enemies, and rushes off to tell David, who is laying on the floor with a remarkably unblemished face (other than a slight reddening) for a guy who just took a tire iron to the chops.
Snow worries that Cora's plan is to actually become The Dark One herself, which would, of course, be very, very bad. They can't get Gold to answer his cellphone, so Snow decides to stall for time - she's going to try to sow some seeds of doubt with Regina, hopefully getting her to rethink her relationship goals with Mom.
Meanwhile in New York, Neal and Henry are going for pizza, and Emma and Gold are third and fourth wheels, respectively, stuck waiting out on the street. Gold asks her to speak to Neal and convince him to come back to Storybrooke. Emma balks at first, but Gold reminds her that if she doesn't, it's likely Henry will hop a bus to New York to spend time with his father anyway. He also tells her that she's lying to herself - she wants a second chance with Neal.
Of course, that conversation is derailed by Neal and Henry coming back out, and tellingly, Henry is now calling Emma "Emma" instead of "Mom." When she asks him if he liked the pizza, he responds with "It's delicious, cheesy, and doesn't lie."

Back in Storybrooke, Snow has invited Regina to Granny's on the pretense of telling her about Henry. She confronts her head-on about her plans with Cora and Regina tells her to bug off. Snow offers her one last chance to choose good. Regina reminds her that she tried the "good" thing and it got her nowhere with everyone. "She doesn't care about you," she cautions Regina, who replies with a scathing, "Really? And what would you know about mothers?" OUCH.
And that cutting line sends us back to the Enchanted Forest again, where Snow is hovering at her mother's bedside, and it's clear that Mom is gravely ill. She tells Mom that she's cancelling the ball but Mom won't have it. She swears she'll be well by then. Then she proceeds to cough up a bloody lung into the handkerchief she's clutching.
Snow is desperate - especially since the doctor doesn't know what's wrong with her. Johanna suggests that Snow seek out The Blue Fairy and ask for her heart's desire.
And in New York, meanwhile, Neal is making stilted conversation with Emma and she suggests that he come back to Storybrooke with them. He starts to tell her something, but is interrupted by Henry, of course. They arrive at Neal's apartment building, and Emma and Gold wait in the lobby while Henry and Neal go up to get Henry's camera.
Suddenly, out of the shadows comes a devilishly devastating dastardly pirate, who has had the foresight to poison the tip of his hook, which he sinks into Gold's chest. 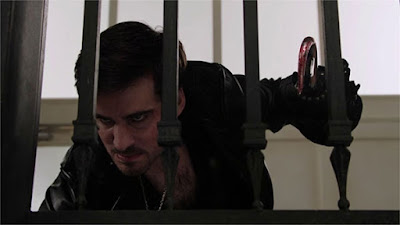 Emma clocks Hook with a garbage can (we call that flirting on this show) and it's rapidly apparent that Gold is not well. For the first time Neal calls Gold, "Papa."
Emma discovers that Hook sailed his cloaked ship here, and Neal reveals that he (a) knows Hook and (b) can sail the ship back. Remember that kids. There will be a quiz later.
He calls a friend who's going to loan them a car that'll get them to the dock because Gold needs to get back to Storybrooke in order to access the magic that will save his life. The poison Hook used has no antidote in this world. Gold also tosses out there that The Jolly Roger is the fastest vessel in all the realms. You'll need to remember that, as well. Oh, will you need to remember that. Not right away, mind you, but you will.
Over in Storybrooke, Snow and David find Blue, who senses a great disturbance in the force that a lot of dark magic has been expelled (whatever the hell that means). They need her to help track the dagger. "Please Obi-Wan Kenobi Mother Superior, you're our only hope," Snow pleads.
Back again to the Enchanted Forest where young Snow finds Blue. The fairy tells her that cheating death isn't something you can do easily. There is a way, but it comes at a terrible price, and can only be used under the most dire of circumstances. She agrees to help as long as Snow vows never to tell another soul what Blue has done.
Snow agrees immediately, and Blue gifts her with a powerful, magical candle. It can save her mother's life, but at the cost of someone else's life. She only has to hold the candle over the heart of the sacrifice, and when the candle is lit, that person's life will be forfeit for her mother's. A tearful Snow takes the candle, but is clearly torn over such an awful decision. 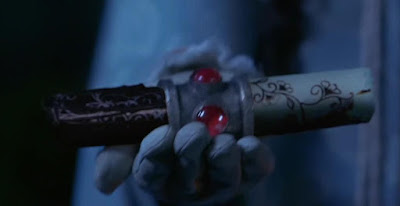 In New York, meantime, Emma gets a text from David and Mary Margaret, and she informs Gold of Cora's plan. He scoffs at there being any chance of Cora getting her grubby mitts on his beloved dagger, but Emma isn't so sure. She reminds Gold that he's about to shuffle off his mortal coil, and he'd better damn well start trusting - and that trust should start with family.
Over in Storybrooke, Blue is using her wand to try to get into Gold's shop, but he's put too strong of a protections spell on it. David suggests using dark magic. Blue refuses, and Snow reminds her that she's used dark magic before, under dire circumstances. Blue looks at her like she just grew a second nose, but the conversation is cut off when Emma calls - and she has the location of the dagger.
Flashback to the Enchanted Forest again, and a sobbing Snow confesses to her mother that she has the power to save her at the cost of another, but can't use that power because she's too afraid. She begs her mother's forgiveness.Her mother tells her that it isn't fear she's feeling - it's strength, and she couldn't be prouder that Snow made the right choice, and then she up and dies. 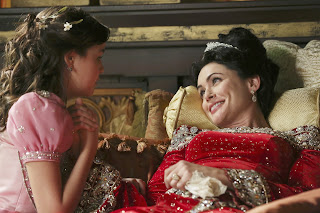 Ahead to Storybrooke again, in the clocktower, where Gold has hidden the dagger in the hands of the clock. Cora and Regina show up, and of course, Snow has to get all cocky and tell them they're too late and good  has won. Cora smirks and shuts that crap right down, producing Johanna, and offering her life in trade for the dagger. 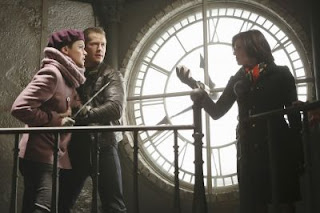 Snow can't make the sacrifice, and hands the dagger over, and of course, Cora throws Johanna out the window to her death anyway. What a peach.
One last visit to the Enchanted Forest, where young Snow, now wearing an amazing black gown and the family tiara, sits with the mourners at her mother's funeral instead of her birthday ball. Where the hell is Dad? He's nowhere. Nice, supportive family you've got there, Snow.

Johanna leads her off, and we see the Blue Fairy arrive, and morph into Cora, who croons "Poison looks good on you"over the queen's cold, dead body. Cora smugly promises to turn Snow White's heart as dark as coal, and destroy the queen's legacy. It's clear she's got some personal venom for this queen.
In Storybooke, Snow finally puts two and two together and realizes that Cora killed her mother and gave her that horrible candle. Cora admits she did it because she wanted Regina to be queen. Regina and Cora poof away, but not before Regina tosses out a snarky. "You see where good gets you?"
Over in the mayor's office, Regina can't help but feel a little troubled - she never knew that Cora killed Snow's mother and orchestrated her entire rise to power - setting up Snow's riding accident. thereby ensuring her betrothal and marriage to Snow's father. It's clear that Regina isn't comfortable with this knowledge, either. Cora tries to reassure her that she's only getting the dagger to help her daughter keep Henry, but she's stroking that thing like it's encased in black leather pants and rooted in a devilishly handsome pirate's lap, so Regina is looking a little skeptical.
And back again to New York, where Neal has located the car he's borrowing. He starts to fish out the key from a magnetized box hidden in the wheel well ('cause people leave spare keys under their cars all the time on the streets of New York) and up walks a really pretty girl with a warm smile who wants to know why Neal is borrowing her car. Neal looks uncomfortable and she introduces herself as Tamara - his fiancee.
Over in Storybrooke, Snow and David at Johanna's grave. Snow is clearly questioning this whole "good is the best way" thing. If she'd only killed Regina all those years ago, none of this would have happened. "All I want is our happy ending," she tells him. "I don't care about justice anymore."
We end with Snow's firm vow: "I'm going to kill Cora."
Ooooooh. Dark.
I'm giving this one four poisoned hooks out of five.

Young Snow is cute as a button, but smarmy in the extreme, Blue was nothing but a plot convenience, Snow seems to have made an abrupt turn to darkness, but hell yes, there was a villainous pirate to get my blood pumping.
By Ellie DeLano - March 03, 2013