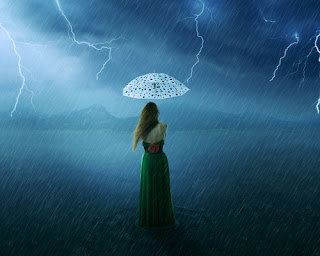 My daughter loves to watch true crime shows. All the forensic work the detectives do is fascinating to her. Last week, there was a particularly interesting story that sparked her curiosity, and she turned and asked me, “Mom, did you ever know anyone that was murdered?”

Yes, I did. More than one someone, I’m sad to say. Then she asked, “Did you ever think when you were my age that you’d know someone who got murdered?”

Well, of course not. If someone had listed all the terrible things that would happen in my life and given it to me then, I would have been completely freaked out.
For instance:


I know two people who’ve been murdered – one by a serial killer.
I know dozens of women who’ve been raped.
I know three people who were molested by a family member or a close family friend. I actually probably know more than that, but they haven’t shared that with me.
I know entirely too many friends and a few family members who have battled or are battling cancer. Some wouldn't win.
I know several people my age who’ve lost a child.
I lost my Mom before she reached retirement age.
I lost my marriage, mostly due to my husband’s infidelity.
Both my kids would be “test tube” babies via IVF.


One of them would be disabled.
I had a stroke before I got my AARP card.

If someone had laid this laundry list out in front of me when I was a kid, I would have run screaming into the night. What a terrible life! Who would want to live that kind of life?

But that’s just the rotten list. Well, most of it, anyway. I told Anna, the good list would stretch on and on and on and on. I started naming stuff off the top of my head: The good years of my marriage, her,  her brother, the books I published, the standing ovations I got for the shows I performed, the time I went to Aruba, the day I was hiking up a ridge and a massive cloud of bluebirds took off around me, the day I helped a friend and she told me later that I kept her from ending her life that day . . .

She finally had to stop me because my list would have gone on as long as my voice held out and then some.

“I’ve had a life of both good and bad, Anna. And that’s what makes it great and worth living. I’ve learned so much from the bad – from the situation itself and from the people who helped me through it. And the good was appreciated so much more because of the bad that’s happened, sometimes.”

“I guess you just never know,” she said.

No, you just never know. You never know how terribly wonderful your life will be until you get out there and live it.
By Ellie DeLano - March 12, 2013