A Facebook friend pointed me in the direction of Ms. Carly Fleischmann's Facebook page the other day, and from there, I learned more about The Six Degree Project.

Carly is a secondary student with autism who attends the Northern Secondary School in Toronto. She set out to recreate what it's like for a child with autism to go wandering off. It was fascinating to read the updates and to realize how utterly on her own she was - almost no one questioned her or asked her if she was lost or needed help. You can follow her updates on the Facebook page - it's a real eye-opener.


As for The Six Degree Project - WOW! What an awesome idea. The intent of the project is to raise autism awareness via social media and other media outlets with a special focus on celebrity connections. They're selling this terrific scarf (and yes, I bought one!) and trying to get as many celebrities as they can to wear it during interviews and other public appearances. 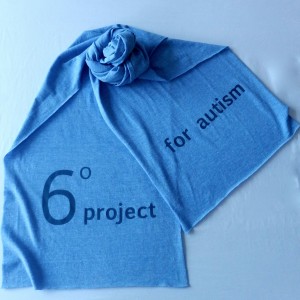 This is a project spearheaded by Ms. Fleischmann, along with fellow students Emily Albert and Mia Kibel, and in conjunction with the students at Northern Secondary School in Toronto and Autism Speaks Canada. What an incredible idea and an amazing group of students!

Luckily, you don't have to go through six degrees to find someone who can make a difference: you. The more we talk about our needs, our frustrations, our challenges, the more commonplace and understood they become.

We can do this - six degrees at a time.