Once Upon A Time - Season Two, Episode 11 Recap: Who Knew Imminent Death Could Be An Aphrodisiac? 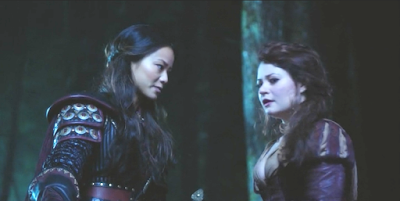 Tonight we begin at the Storybrooke town line, where Mr. Gold is unloading Mr. Smee from his trunk and forcing him across, despite Smee's protestations.

Lo and behold, Smee retains his memories, thanks to a magic potion Gold has poured on Smee's beloved hat. It turns out that if the potion is put on something of great sentimental value, it helps you retain your memories after crossing the town line.

He releases Smee, with a smug smile as he says, "I have a trip to plan."

Then we move over to the cemetery, where Snow is officiating at Archie's faux-funeral, and doing a beautiful job, I might add, reminding everyone that Archie's spirit will remain as a conscience for everyone.


Segue over to the Jolly Roger, where Hook is menacingly trying to get the dagger's location out of Archie, who starts singing like a canary when that hook comes out, confessing Rumplestiltskin's secret weakness: Belle.

Over in Gold's shop, we learn that Gold is going to use the memory retaining potion on the shawl that Baelfire had around him before he fell through the portal. He carefully locks it away in the meantime.

Flahsback now to the Enchanted Forest, where we learn about a horrible beast called the Yaoguai (which must be a real bitch for Emilie de Ravin to pronounce with an Australian accent) that has been terrorizing a village. Listening in on the local militia's plans to take down the beast is none other than our charming Belle, and...Dreamy! And this is the very night he's planning on running away with Nova! 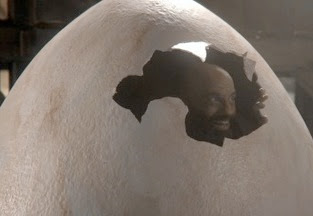 He encourages Belle to sign up and take on the Yaoguai since she's craving adventure so much. "Last time I faced a beast," she sighs, "it didn't end well." Dreamy asks her what she's waiting for and she gets some gumption and decides to join up. Dreamy also gives her a pouch of fairy dust, just to aid her in her quest.

The misogynist, ignorant, asshole men mock Belle unmercifully because she's reading up on this mythical beast - the book is written in what looks like Chinese, and she sends the men on a wild goose chase, since they've been so crappy to her.

She makes her way to the real location of the Yaoguai, and there she meets Mulan! Yay Mulan! And of course, Mulan is a complete bitch at first meeting, as is her way. She saves Belle from the Yaoguai, then bitches at her for ruining her hunt. Belle points out that she can help her find it again, with the aid of her book, but Mulan tells her to go piss into the wind. So much for girl power.

Forward to Storybrooke, where Belle is opening up the town library - that is until she sees a villainous pirate.

"I'm not here for the books, love," he croons, and a panty-steaming terror confuses every hot-blooded woman watching.

Belle remembers him from when he broke into her cell at the queen's palace. She manages to get away from him into the service elevator and puts in a choppy cellphone call to Rumple that sends him running. He arrives to save her, and Hook has disappeared.

Over at the loft apartment (and Archie's wake), Henry is taking Archie's death really hard and Emma is at a loss to comfort him. Grumpy steps forward and asks when it will be possible for them all to go home - and by home, he means the Enchanted Forest. None of them feel safe with Regina on the loose, and now that the curse is broken, it's only a matter of time before an outsider comes across the line into town - and that could be bad.

Grumpy points out that while they might enjoy things like penicillin (great line!) but they're all a bit homesick.

Gold meanwhile, takes Belle back to the shop so he can find some way to protect her from a vile, villainous, ungodly handsome pirate, and they find the shop ransacked - and worse - Baelfire's shawl has been stolen. Hook attacked Belle only to get Gold away from the store.

Belle begs Rumple not to let his hatred of Hook get in the way of his quest to find his son. She asks what happened between them to create such enmity, and of course, Rumple only gives her part of the truth: that because of Hook, Baelfire grew up without a mother and he took Hook's hand in retaliation.

She asks specifically what Hook did, trying to probe deeper, and Rumple only says that Milah died, and that's all that matters.

Rumple is furious about Bae's shawl being stolen of course, and tears Belle a new a-hole when she offers to help, belittling her and asking her in a horribly condescending tone just how she thinks she's going to help him, having never dueled with a pirate or done anything badass before.

Belle gives as good as she gets, and tells him she's not just going to sit around while he goes after the bad guy. Rumple gives her a gun, just in case Hook finds her before he finds Hook, and she tries to make him promise that he's only going to get the shawl back. Rumple refuses to answer.

Back to the Enchanted Forest again, where the militia guys are trying to shove Belle down a well for leading them astray. Mulan shows up to whoop their asses, but gets injured in the struggle. She's still planning on finding the Yaoguai, but realizes she needs Belle's help to find it. They team up and off they go.

Forward to Storybrooke, where Gold corners Mr. Smee, demanding to know the location of a certain murderous pirate with the dreamiest blue eyes you've ever seen (okay, maybe he didn't say it exactly like that), but Smee has no idea of his whereabouts. Gold turns him into a rat.

Meanwhile, over at the apartment, Henry is calling Archie's answering machine to hear his voice on the recorded message, when Emma arrives with Pongo in tow. The dog immediately lifts Henry's spirits, and Snow remarks that it's fine...it's just going to be crowded - all of them plus a dog. She makes the suggestion that they get a new place.

Belle has found that Hook left a piece of knotted rope behind at the library. She recognizes that it's a nautical knot and that mean's Hook's ship is here somewhere. She heads down to the dock, and can hear the wind billowing in the sails and the creaking of the moorings.

She boards the ship, and inside, she finds Archie. She releases him, telling him to go find Rumple, and then in a cabin she starts looking for the shawl. She sets down her gun and Hook's perfectly enunciated voice interrupts her. Ooooh, the chills. He grows more menacing, picking up the gun, and what follows is the only time I have ever, ever nearly experienced an orgasm from watching a man hold a woman at gunpoint.


Back in the Emchanted Forest, Belle and Mulan find the Yaoguai, but Mulan is much more incapacitated than she thought. She tells Belle it's all on her to kill the beast, and when Belle expresses doubt, Mulan tells her she used to get dissed all the time for being a chick until she found her "warrior's spirit" and grew some proverbial balls. Belle stiffens that upper lip, and heads off to tackle the nearly unpronouncable monster thing.

The fate of the village depends on you, Belle, but...no pressure.

Forward to Storybrooke again, where Belle is running across the deck of a rocking ship in ridiculous heels only to skid to a halt as Hook appears in front of her again. Unfortunately, he's stopped before he can mesmerize terrorize her again by Rumple, who proceeds to beat the everloving f**k out of the guy for messing with his girl. 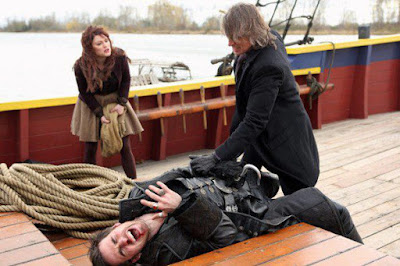 Belle intercedes, reminding Rumple that he's trying to be a better man, and Rumple leaves Hook bleeding and injured, but alive.

Back in Enchanted Forest again, Belle is running through the abandoned village that the Yaoguai is ransacking, and when the fiery beast corners her, She thinks fast and unleashes a cistern of water on it, injuring it and dousing its flame. The beast scratches out the message "save me" in the dirt, and she realizes it may not be what it appears. She throws some fairy dust over it and the beast transforms into none other than Prince Philip.

Belle asks Philip to take Mulan to a doctor and he vows to do so. Ah! So now we know how he and Mulan met! Mulan thanks Belle, they share a "Hells yes, gurrlpower!" moment, and then Belle decides she's going to find Rumplestiltskin, now that she's got mad beast-taming skillz. Unfortunately, Regina finds her first, and we know what happens next...and for the next 28 years.

Forward to Granny's in Storybrooke, and Snow is showing David the local real estate ads. He's not so keen on the location, mainly because he wants to go back to the Enchanted Forest. Snow gives him a crazy-eyed look and reminds him that their castle is trashed, the ogres are back, and Cora's in power - the Enchanted Forest is not exactly prime real-estate anymore. 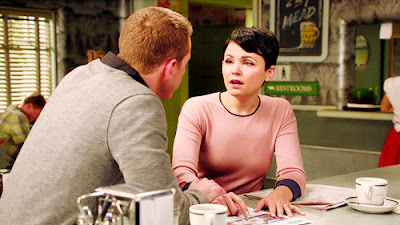 David is more of fixer-upper kinda guy (oh god, now I'm singing that damn song from Frozen) and tells her that's exactly why they should go back. It's home, and they need to be there - for the good of their former kingdom. Snow isn't sure they both want the same thing.

Over at the apartment, Archie shows up alive and while everyone's overjoyed, he breaks the news that Cora and Hook are now in Storybrooke, Emma realizes they were all wrong about Regina, and she can't help but feel they're all going to pay for that.

And at the town line, Mr. Gold is preparing to test his shawl and see if it works for him. Belle is with him as he tentatively steps across - and it works perfectly. His happiness is a palpable thing - that is until a certain dastardly pirate with a jawline sculpted by the angels steps out of the trees, aims a gun and pulls a trigger, shooting Belle in the shoulder and sending her staggering over the town line.

He taunts Rumple, telling him that Belle is going to live, but now she'll never remember him, or herself, or what they ever were to each other. "Now you finally know how it feels," he goads. Rumple cues up a fireball to fling at him and then suddenly, out of nowhere, a car comes barreling over the town line, hitting Hook and then veering wildly off course and slamming into that one damn rock that everyone slams into. Seriously - why haven't they moved that thing?

The car has a Pennsylvania license plate, and we end the episode knowing that clearly, there's an outsider in Storybrooke.

I'm giving this one SIX hooks out of five because damn.

That pirate made me want to...uuuuuuunnnnnnffff.