Once Upon A Time - Season 2, Episode 12 Recap: Emma Chains Hook To A Bed. What More Does An Episode Need? 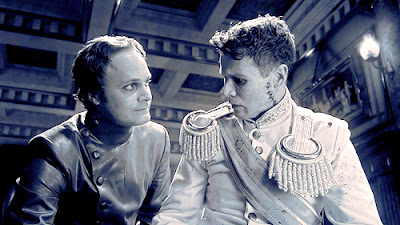 We begin where we left off last week, with Belle laying on the road, shot (and healed quickly by Rumple) and having lost all her memory for crossing the town line. Hook is banged up on the side of the road, but still manages to greet Emma with "Hey Beautiful."

The stranger in the car is a man, he's unconscious, and he's pretty messed up.

"Looks like the world just came to Storybrooke," Emma remarks.

Meanwhile, at the hospital, we see Dr. Whale, drinking alone when the ambulance arrives. This sends us in a flashback to (yawn) the world of black and white, where Whale is known by his other name: Frankenstein.

We see that Victor (Frankenstein's first name) is being pressured to join the military by his father, who doesn't give a crap if he'd rather study medicine. He refuses to fund anymore of Victor's research.

Victor's brother Gerhardt (whom he's obviously close with) is on his side, but Victor needs to find a way to get the necessary funds to keep his work afloat.

Forward to Storybrooke, where Gold is standing watch over Belle in her hospital room. She comes awake and understandably freaks out over the creepy guy who's staring at her while she sleeps.

In another room, Emma has Hook manacled down (again) to a bed and demands to know where Cora is. How is it that he can still look so damn good even bloody and abraded? And despite the damage to his body, his wit is quite intact (along with a few other things, he notes, with a decided sparkle in his eyes). He asks Emma for his hook back and then gives her a saucy look and adds, "Unless there's another attachment you'd prefer..." 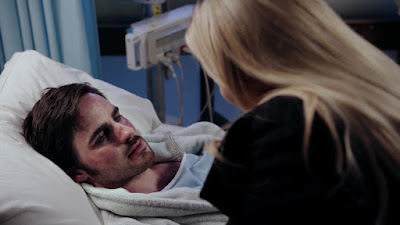 Emma pokes him in his very sore ribs and makes it clear she's not putting up with his nonsense. We see Hook struggling against his bonds, and then we move out to the lobby, where Snow, Charming, Leroy and Red are looking at the visitor's phone and trying to figure out how to hack into it.

Luckily, Emma's done this stuff for a living and she's got his name: Greg Mendell. He takes pictures of himself eating a lot, apparently. He may be an ordinary Joe, but he could carry word of them to the outside world. Gold points out that the guy saw him throwing fireballs, so they'd better hope he dies, otherwise their cover is blown and the world will come flooding in.

Emma and the others agree that they can't just let him die, and Whale agrees to attempt life-saving surgery. Suddenly, Greg's phone rings, and it's clear someone is looking for him - the person is identified on his contacts only as "Her" - and that's not the least bit demeaning to any girl now, is it? Yeesh.

Flashback to blah-and-white-ville again, and we see Rumple (wearing red - as if he needs to stand out) approaching Victor and offering a deal. He'll give him a buttload of gold if Victor will show him how to revive the dead. Why Rumple needs this, I don't really know. Bae isn't dead, he doesn't want Milah back....I'm not really sure where they're going with this, but oh well.

Forward to Storybrooke, where Cora shows up in Gold's shop bearing a gift. She wants to reconcile with Regina, and in return for his help with that, she's brought a magic globe that will show Rumple exactly where Baelfire is.

"I want you to find the one person in this universe who might still love you," Cora says. "After all, I'm doing the same thing."

Rumple takes the deal and she says "Let's seal it like we used to..." and they kiss.

Ugh. For some reason it's just...ugh.

Over at the hospital, Whale takes off instead of prepping for surgery,

Which throws us back to the blah-and-white world again, where Gerhardt sees Victor digging up a corpse and is suitably creeped out by that. The local constable shoots at what he thinks are grave robbers and hits Gerhardt by mistake, killing him.

Forward to Storybrooke again, where everyone's waiting on tenterhooks for the surgery to be done. (Side note: if you haven't already bought the DVD set, go to Youtube and watch the outtakes on this scene for an awesome Hook moment that got left on the cutting room floor).

They discover that Whale is gone, and take off to find him. Red agrees to track him, which is fairly easy since he reeks of booze. David fills Snow and Emma in on Whale's true identity and Red takes off to find the erstwhile doctor.

Flashback to blah-and-white, and we see Victor trying to revive Gerhardt's corpse to no avail. He needs a stronger heart (tying into his appearance in the previous episode, where he gets the heart from Regina). Victor's father catches him trying to reanimate his brother and disowns him in a fit of anger.

Victor successfully revives Gerhardt again with the magical heart he stole from Regina, and while Gerhardt is obviously alive, he's not himself. He's nonverbal and reactionary and every bit the Frankenstein monster, sans the bolts on the neck.

Dad is unimpressed and starts beating on Victor, calling him a disgrace. Gerhardt intervenes, beating Dad to death. He's clearly freaked out by this, much more so than his non-monster brother. 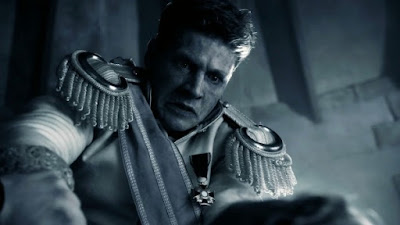 Back to Storybrooke, where Cora is creepily smelling all the clothes in Regina's closet. Then she sets eyes on a picture of Henry, and realizes she's got a card to play.

We see Henry walking alone down into Regina's vault, then standing at a two-way mirror and calling for her. Regina opens the door to him only to discover that it's really Cora in disguise. She's far from pleased by this development and immediately demands that Cora make things right and confess her part in Archie's murder to the townspeople.

Cora agrees, telling Regina she's determined to reconcile. She gives her a heartfelt speech, pushing all the right Mom-and-Daughter buttons, playing Regina's emotions like a harp. Damn, she is a master manipulator. She claims she framed Regina only to show her who these people really were and how they'd turn against her in a heartbeat.

Across town, we see Dr. Whale contemplating a jump into the ocean, but he's caught at the last minute by Ruby. She plonks down next to him and they commisserate. 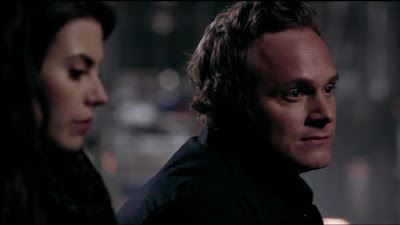 "I wanted my name to stand for life," he says mournfully.
"You're Frankenstein, and I'm the werewolf." Ruby replies. "I ate my boyfriend. Regina thought she was punishing us be erasing who we were. I think she underestimated how much crap we wanted to forget."

It's a tender moment, and we wish - oh, how we wish - the writers had let this one grow. They've got a really nice vibe together.

Anyway, Ruby reminds him that he can still fix that guy in the hospital. Someone loves him enough to keep calling him (despite the fact that the guy refers to his significant other by pronoun), and Whale has a chance to bring this guy's life back.

On the other side of town, Cora reminds Regina that as long as Snow, Charming and Emma are still around, she'll never have Henry entirely to herself again. She begs Regina to let her into her heart and together, they'll get Henry back.

Regina falls for it, wrapping her arms around her Mommy as Cora details her plans.

Whale heads back to the hospital, and we flash back to boresville again. Victor is talking to Gerhardt, who attacks him, and then Gerhardt makes it clear that he wants to die and stay dead. This horrible mockery of a life is torturous for him, and Victor reluctantly points a gun at his head. He can't pull the trigger, no matter how hard he tries, and he finally leaves the gun and walks away, hearing the shot echoing afterward as Gerhardt ends his own miserable existence.

Forward to Storybrooke, and day is breaking. Whale steps out to share the news that Greg Mendell will live, and he's waking up. Emma goes in to question Greg, trying to ascertain what he might have seen. Greg tells her that he was busy texting, and didn't see a thing. Emma agrees to let him off the hook for texting while driving, and heaves a sigh of relief that he's got no suspicions.

Speaking of off the hook....guess who's missing?

And then we move over to Belle's room, where Mr. Gold is holding her ever-so-special chipped cup, hoping it'll act as a talisman and help her remember. She freaks out again and throws the cup against a wall, smashing it to smithereens. Gold is heartbroken.

He heads back to his shop, where we see him prick his finger and put a drop of blood on that globe that Cora brought him. It coalesces into a map of the world, and specifically, the north-eastern United States. 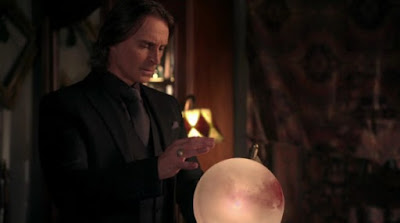 Henry, meanwhile, has been waiting all night for some adult supervision, so they give him the lowdown, letting him know that Whale is Dr. Frankenstein. Henry runs to get the book. He thinks it's weird that Frankenstein isn't in the book, therefore the curse affected realms with other stories and who knows who else is in town. File that away folks, I'm sure they'll call back to it later.

Suddenly, there's a knock at the door. It's Gold, and he's here to remind Emma that she owes him a favor and he's cashing it in. He tells her to pack a bag, because she's leaving with him today.

And we end the episode with Greg Mendell on his phone, talking to the mysterious woman who's been calling him. He glances around and then lowers his voice to say "Honey, you're not gonna believe what I saw."

I'll give this one four hooks out of five, and only because of flirty, beaten-up Hook, otherwise it would have been three.

I adored the moment between Ruby and Whale, and Leroy had some funny lines. Hook and Emma's verbal sparring and Rumple's agony at Belle's lack of memory were incredibly played, but damn, damn, DAMN do I hate the whole Frankenstein thing. They could have come up with a better character. And we still have no idea why Rumple wanted Victor to teach him how to reanimate the dead. It never was explained.
By Ellie DeLano - January 20, 2013