Once Upon A Time, Season 2, Episode 10 Recap: Mom & Dad Doing The Deed And Regina Gets A Bum Rap 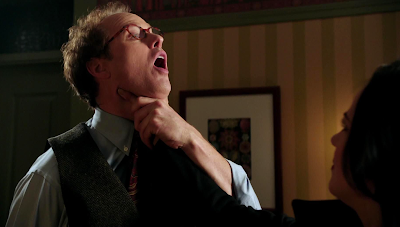 We begin this episode the way I like to begin an episode: with Hook, and he's standing at the mast of his ship (in a tip of the hat to Jack Sparrow's entrance in Pirates of the Caribbean), and he and Cora have just docked in Storybrooke.

Cora points out that magic is now in town and Hook's not going to be able to fight Rumplestiltskin on a fair playing field. She turns the Jolly Roger invisible, and together, they head off to take a tour of the town.

And on that note, we move to the loft apartment, and we're in bed with the naked Charmings who are making out and making up for lost time. 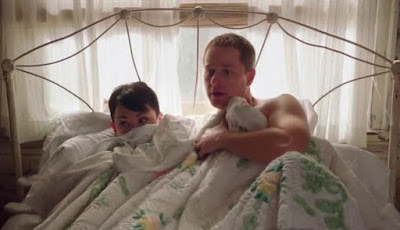 Emma walks in and does an awkward double take as Henry asks "What are you guys still doing in bed? It's the middle of the afternoon."

Emma (who is obviously uncomfortable catching Mom and Dad in flagrante delicto ushers Henry off to the kitchen so they can make tacos for the big shindig at Granny's tonight.

David quips, "It's impressive that we can still provide her a few traumatic memories at this stage of the game." As Snow blushes beautifully.


Flashback now to the Enchanted Forest, and we see Regina, who's being informed that King George's kingdom has fallen, and her position is precarious. Regina vows to find a way to defeat those damn Charmings if it's the last thing she does.

Her wish seems to be granted when she comes upon Snow, who, like any good damsel has fallen down in the woods. She gets to her feet, tells Regina to surrender and offers her parley. Regina refuses, preferring murder instead. Blue and the other fairies emerge from hiding (as this has been a carefully staged trap) to immobilize her and she's taken prisoner.

And forward we go again to Granny's Diner, where there's a welcome home party for Emma and Snow and it looks like all the major characters are there...well almost. 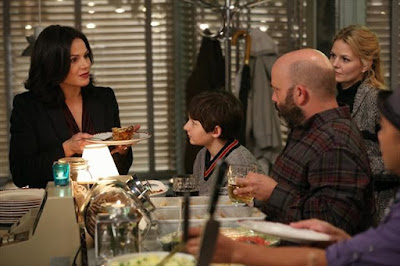 Into the festivities walks Regina - who is definitely not a welcome sight. Emma invited her much to Snow and David's dismay. She sits alone in a booth while everyone scarfs her lasagna (side note: why would you bring lasagna to Granny's? Didn't we just see her inventory a metric assload of the stuff a few episodes ago?) Anyway, Regina gets tired of being persona non grata (two latin phrases in one blog post - wow!) and walks out, with Emma following her.

Regina thanks her - and quite sincerely. She asks if it would be possible for her to see Henry more - maybe have an overnight? Emma balks and Regina unloads all her mom angst on Emma, then apologizes again. She's trying, and it's clear that she really, really is.

Emma mentions that Archie told her that Regina's been coming to him, and it was really his idea to invite her because he thought it would help her. Regina is clearly unhappy to hear that Archie is blabbing her personal issues all the fugg over town (understandably) and she leaves, head down and heartsore.

Watching from a distance are Cora and Hook. Hook asks if Regina's broken yet because he's ready to go skin a crocodile. Cora thinks she needs to suffer a little more. Ah...mom always knows best. 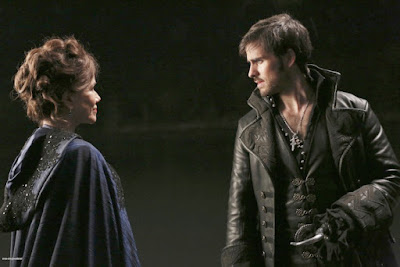 The next morning, Regina is out for a walk and runs into Archie, venting on him for his unprofessional blabbermouthing. Archie was only trying to help by sharing that Regina was now in therapy - he wanted to demonstrate her commitment to change. Regina feels betrayed regardless. He swears he would never betray their doctor/patient confidentiality and Regina sasses back with "Need I remind you that you got your PhD from a curse?

In the middle of this tiff walks Ruby, who wants to make sure everything's okay. Regina shoos her off (literally) before giving Archie the stink-eye and reiterating that he's lucky she's changed.

Flashback to the Enchanted Forest, where we see a council table with Snow, Charming, Jiminy, Granny, the dwarves, Red and Blue, and they're all trying to decide Regina's fate. They can't banish her to another realm - it wouldn't be fair to the other realm. Charming says there's only one thing to do: Regina has to die. Snow isn't feeling to great about this.

Forward to Storybrooke again, and we see Ruby closing up the diner. She takes notice of Regina, entering Archie's office across the street. Regina enters the office, Pongo barks, and then Regina promptly chokes the hell out of Archie. A few moments later, we see her exit and in a swirl of blue smoke we see that it's not Regina at all, but Cora. Dammit, Cora!

The next morning, Emma is walking Henry to the bus when Pongo interrupts them by barking madly. Ruby (who speaks fluent canine) tells Emma something's wrong and together they rush into Archie's office and find him dead on the floor.

Emma and David bring Regina into the station for questioning and she seems genuinely surprised (and saddened) to hear that Archie is dead. David scoffs, thinking it all an act, but Emma and her superpower can tell that Regina is telling the truth.

Back to the Enchanted Forest again, and we see imprisoned Regina being visited by her beloved Daddy. He tells her to ask for forgiveness, and show them that she can change.

Regina is led to the post in the castle courtyard, and a marksman readies his bow for the fatal shot. Jiminy pleads with Regina one last time, asking her if she has any last words. Regina looks at the face of her beloved father and then ...tells them all to go f**k themselves in beautiful, dramatic descriptive language. 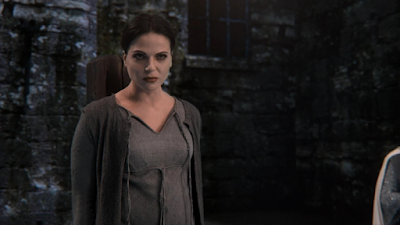 David orders the marksmen to take aim, and Snow and Blue work together to stop them before they can find their mark. Snow spares Regina, and David orders her taken back to her cell.

Later, a troubled Snow is approached by Rumplestiltskin, who suggests there may be a way to administer a test - to check Regina;s motives, thwarting her for good. Snow thinks Rumple wants Regina dead, but he assures her that he wants her very much alive. They make a deal.

Forward to Storybrooke, where Emma is fighting to convince Snow and David that Regina didn't kill Archie. They're understandably skeptical (after seeing what they've been through) so Emma suggests that they release her, and try to find out the truth.

The three of them then begin searching Archie's office to find there's only one missing file - Regina's. Snow and David find that pretty damning, but Emma (who knows a thing or two about the habits of bad guys) thinks it's sloppy - and Regina would never leave those kind of clues.She thinks Regina is being framed, and there's only one person in Storybrooke who would kill her to get what he wanted.

Off they go to Gold's shop. Gold denies any involvement and tells them to ask the witness, a.k.a. Pongo. He even convinces Emma to use her magic, so he can't be accused of tampering with the evidence. 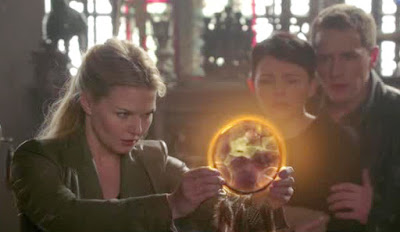 He holds up a dream catcher, and a moment later it becomes a mirror, showing the scene and that it was clearly Regina who killed Archie. Snow and David are suitably freaked by their daughter's use of magic, but no more so than Emma.

They take off to get Regina, and Snow suggests they immobilize her with fairy dust. It's worked before, after all.

Which takes us back to the Enchanted Forest again, and Snow is approaching Regina in her cell. She offers her one last chance to turn away from this dark path. Regina reminds her that she's not that good woman anymore, and it's still Snow's fault. Snow opens the door, giving Regina a chance at freedom, if she'll only leave the evil behind in the cell.

Regina pins her to the wall, of course, and Snow pulls a dagger in defense. Regina takes the blade and rams it into her only to find it won't do any damage. 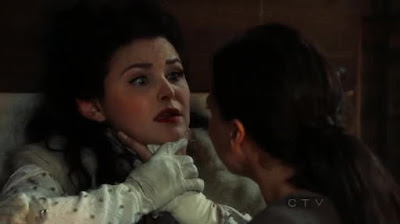 Snow and David are now under a protection spell thanks to Rumpletstiltskin. As long as she lives in this world, Regina cannot hurt them.

Way to play a playa, Rumple.

Snow gets all steely-eyed and tells Regina if she ever tries to harm anyone in her kingdom again, she's going to off the bitch. The guards haul Regina away, and she's banished, and full of impotent rage.

Forward to Storybrooke, and Emma confronts Regina. They get into a Mom fight complete with magic and screaming, and Blue tries to immobilize Regina - who sees it coming from a mile away. She vanishes, clearly hurt by the way everyone has turned on her.

Emma balks at having to tell Henry that Regina is a murderer and she's seriously doubting her own mom skills until the parentals step in to remind her that they're in the same boat - they have just as much parenting experience as she does, and they're all going to figure this out together.

Regina is sitting in a parked car, watching Henry get off the bus, watching Emma tell him that Mom betrayed his trust and murdered his friend, and she's sobbing her eyes out. Oh, the feels.

Flashback to the Enchanted Forest again, and Rumple is paying Regina a visit in her new castle of banishment on the very day that Snow and Charming are getting married. She points out that it's all his fault she can't harm them in this land. He reminds her of the weight of those last three words, and an evil glint appears in Regina's eye. The bitch is back, baby, and ooooh so evil.

Forward to Storybrooke, and Cora is at the dock where Hook is sharpening his appendage. No, not that one, you dirty git. His hook. He asks if she's accomplished what she wanted and she smiles that creepy Regina smile and tells him that Regina's lost everything. Hook gives her that saucy grin and snarks:

Then he grumps because she promised to help him get Rumplestiltskin. She tells him she's left him a present in the hold of his ship. He opens up the hatch and we see...Archie! And he's alive!  Cora explains that Archie is privy to everyone's secrets, including Rumpletstiltskin's, and he can tell them if Rumple has a weakness.

"If he's alive, then who did you kill?" Hook asks.
"How do I know?" Cora shrugs. "It's my first night in town."
"You disguised the body to look like him," Hook replies. "As if death wasn't punishment enough."

God, I love the snark on this show. Love it.

And we end with a menacing look from Hook, which is fine by me.

I'm giving this one four hooks out of five:

Lots of fun snark, Regina feels, naked Charmings, and Emma showing off her magic for the first time. This was a solid episode.
By Ellie DeLano - January 06, 2013