When You're A Special-Needs Mom, Sometimes Love Is A Battlefield

I took my son to war over the weekend.

The battlefield was rife with tribulation. It was loud - blaringly so. Discordant sounds hit us from every direction, lights were flashing in our eyes and everywhere we could see. We were pushed and shoved and pummeled and by the end of the day we ached from our exertions. It was misery at times, but we made it through.

I made it through taking my autistic son to a holiday fair. 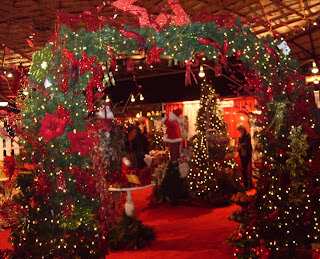 I know what you're probably thinking. Who the heck would take a kid with sensory issues to a place where fifty different kinds of Christmas music are playing in over seven hundred booths, all with twinkling, flashing Christmas lights? Who would make a child with autism put up with the noise of thousands of people, the smells of various vendor booths and snack bars, and the whirling hubbub all around? Who would clutch his hand, terrified of losing him in the crowd, constantly whirling around every time she stopped to look at something to say "David? Where's David!" (even though he mercifully never wandered off)?

Why would I do that to him? And to me?

I do it because every single day, we go onto the battlefield. Some days we make progress, some days we just hold ground. Some days it feels like we're out of control and on the run. But it's important that we show up, because you just never know when you're going to crest a hill and make a breakthrough that changes the game. That's the way autism is.

If I kept him at home, sealed in his safe little I'm-at-home bubble, he'll never grow. He'll never learn to accomodate. He'll get no practice in how to live his life in the big, brash, occasionally loud, occasionally too bright world we live in. The world he has to live in. And ever in the back of my mind: the world he'll someday have to live in without me in it.

So when his sister - who deserves to have some childhood fun and childhood memories of her own - said she'd love to go to the Christmas Fair and buy gifts for her friends and family with the money she's carefully saved, I said yes.

And somewhere in the course of the day, we experienced a meltdown laying down in the middle of the very busy crowd because I wouldn't let him hold a very delicate looking ceramic dog at one of the booths. He marched away from me in anger, right into a booth with hundreds of scented candles all decorated in blinking lights. The smells and the flashing on top of his overloaded anger pushed him over the edge and he ran into the walkway, throwing himself to the ground with his hands over his eyes, shrieking.

I managed to get him up before he got stepped on, but not before someone told me my kid was a brat and needed a spanking.

"You should have said something, Mom!" My daughter exclaimed. "David's autistic! Can't they see he's autistic?"

No, they can't. Not unless their kid is autistic, too. Then you can pick it out a  mile away.

So we helped David to a chair in a nearby seating area, and I held him and rocked him and rubbed his back and soon, he calmed. A soft pretzel and a cold drink distracted him just like I hoped it would, and we were back on our feet and doing OK after that.

And in between that one bad incident, was the rest of the day. I saw David sitting on Santa's lap and shocking him by asking Santa what he wanted for Christmas. David stepping in front of me in a throng of people, then turning and saying in a loud voice to everyone "Let the lady go by". I turned just in time to see a woman in the wheelchair behind me, gratefully pushing through the hole he made in the crowd. I saw David staring in wonder at toy train exhibit, picking out just the right gift for his sister, and slaying imaginary dragons with the balloon sword that a man dressed like an elf made for him.

David, being a kid.

It would have been easier to stay home that day. Safer. Not nearly as much hassle. Some people would see that horrible meltdown as confirmation that a child with autism had no business being in a place like that. I saw David, managing what once would have been completely unmanageable for him, and doing it with only one snafu. I call that a win.

The battle is over, but the war goes on. Every single day, we step onto the field. Once, I took his hand before we stepped out. Now, I stand behind him, a guiding hand on his back. Eventually, he'll be climbing hills and fighting skirmishes all on his own.

And like me, he'll value the hard-won moments of peace that he's earned on that field of battle.
By Ellie DeLano - December 03, 2012