Once Upon A Time - Season 2 Episode 9 Recap: Playin' With The Queen Of Hearts We begin with a flashback to the Enchanted Forest of old, and a hooded figure is bringing food to a prisoner in a tower. Said figure turns out to be my favorite pirate captain, who breaks into the world's most elegantly decorated cell to rescue Belle.

Only he's lying - trying to get information from her about Rumplestiltskin's dagger. She has no idea what he's talking about so Hook promptly drops the facade and smacks her across the chops, Then he bares that hook and prepares to disembowel her, only to be thwarted by Regina.

Two notes I have to make here:

First....this is the only scene in the whole series so far featuring Hook that I seriously have a problem with. Watching Hook strike a helpless woman, much less try to outright murder one - it just feels...wrong. I realize Belle is a means to an end, but this scene has just never set right with me. Killian Jones, for all his pirating ways, has a code of honor so deeply ingrained it should be etched in his bones. Murdering a helpless girl - even if she's Rumpletstiltskin's girl - just doesn't mesh with Killian as we've come to know him.

My second note is another behind-the-scenes bit. This was the first scene Lana Parilla and Colin O'Donoghue filmed together, and they are both just spot on. What chemistry! So perfectly evil in two different ways and the way they dance around each other...it almost makes me want to ship them. Almost. 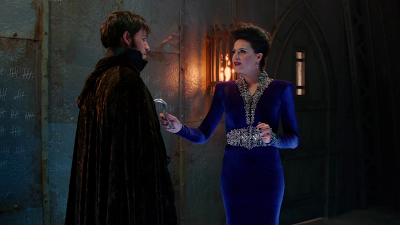 Anyway, back to the scene. Regina looks amazing in that sapphire blue gown, and she offers Hook a deal: if he goes to Wonderland and rips her mother's heart out, bringing the body back to her, she'll take him to Storybrooke with the curse. In a land without magic, he can kill Rumplestiltskin with ease.


We flash forward to Storybrooke, where Regina is holding watch over a sleeping-cursed David. Gold reminds her that they have no way of knowing if their message reached the other side, and it would behoove them to take precautions in case Cora comes through that portal. Between the two of them, they should be able to booby-trap the portal and kill anything that comes through.

Regina balks at first, but Gold reminds her that if they mistakenly kill Snow and Emma, that would leave Regina as the only mother in her son's life. She could even lie and say the magic was wonky. Regina still balks, but Gold pushes his point home, reminding her that Cora will target Henry if she makes it to Storybrooke, and we see Regina giving in.

She bald-faced lies to Henry about where she's going, which happens to be the mines. Rumple pulls out the wand of a dead fairy and steals all the magic out of the fairy diamonds. 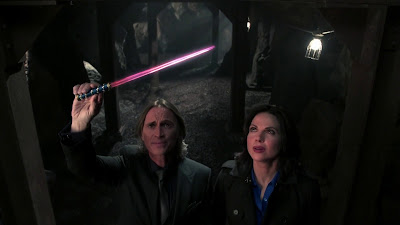 Flashing back to Hook and Regina, we see that Regina has enchanted his hook to be able to rip out exactly one heart (hence, he was able to take Aurora' in the last episode). She also gives him the body of a dead guard to take with him, since the rules of Wonderland demand that if two go on, two come back. He'll arrive with Claude, and return with Cora's body.

And now we're treated to bad CGI scenery that turns the actor's faces a bilious color, but the costumes are so magnificent (and Hook is so damn amazing), I don't care much.

Hook makes his move, only to be thwarted by the fact that Cora doesn't have her heart in her chest. She retaliates, and Hook makes what I like to call his sustained "O" face, right about the 1:27 mark. You know what I mean, ladies.

Cora lets Hook know that Regina forgot to mention one important detail about her curse: Hook will lose his memory. He wouldn't even know Rumplestiltskin if he passed him on the street. So she offers a better deal: if Hook helps her fool Regina, she'll protect him from the curse and find a way to get him to Rumplestiltskin.

Forward to the present-day Enchanted forest, and the girlpower cadre arrives at the prison cell and finds and empty jar of squid ink - and a scroll with Emma's name written on it a bazillion times.

Suddenly, Aurora the pampered princess winds up her pitching arm and throws a rock that triggers the cell door - and in walks Cora, with Hook. She nabs the compass, and Hook can't help getting a dig in as Emma pleads with him to help her get back to her son. 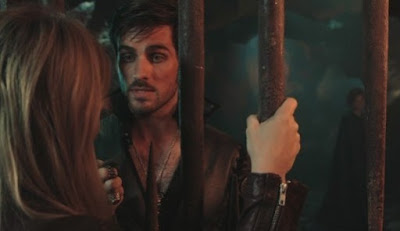 Damn, Hook. So cold. So sexy even when you're cold.

Don't those cell bars look like they could be easily pried apart? Mulan's skinny as hell and could probably squish right through there. Just sayin'.

Anyway, they're all really pissed at Aurora until they realize Hook took her heart and now they're all trapped and staring at this useless scroll with Emma's name compulsively scrawled all over it.

The girls are all blaming themselves when Snow interrupts the whine-fest to remember that the squid ink on the scroll is still magic. She blows on it, and it rips a hole in the cell bars, even though squid ink is used to immobilize magical creatures, not dissolve spacious wooden cell bars.

Hook and Cora, meantime, have gone to the dried up bed of Lake Nostos, where Cora manages to rip a hole in the ground and get the water to shoot up like geyser.

Flashing back to the old Enchanted Forest, we see Regina bidding her mother's body a tearful goodbye. She leaves the room and Hook enters, helping Cora out of the casket. Cora is more than satisfied that Regina is exactly where she wants her - so she's decided not to kill her back for trying to kill her first. Ah, the family that murders together, stays together, and all that. Brings a tear to my eye.

Anyhooo, Cora puts a big bubble around her and Hook and part of the countryside (explaining how Aurora, Mulan and the others survived) and it will keep them in stasis for 28 years, until her plan can come to fruition.

Over in modern-day Storybrooke, meantime, Red and the dwarves have discovered that the fairy diamonds are gone. Henry is reading to David when the Red bursts in, looking for Regina and Gold. Henry realizes that Regina lied to him and he's suitably devastated. They all rush off to find Gold and Regina.

Gold takes Regina to the wishing well, where they plan to seal off the portal and keep their interests intact. Together, they put up a magical crackling green barrier that's sure to kill anyone who comes through.

Moving over to Cora and Hook at Lake Nostos, we see them thwarted by our heroines, Emma goes after the compass (after Snow shoots it out of Cora's hand), and has what could be the sexiest, most innuendo-filled swordfight ever filmed with our dear Captain.

In the meantime, Aurora's heart goes flying and Hook snags it at the last minute, returning it to Mulan, who rushes off with it like she always does. There's a tender girl moment when she puts it back in Aurora's chest, and Aurora tells her that Cora's told her how to save Philip, and they agree to rush off and do exactly that.

And then Emma clocks Hook across the face, knocking him out and we know.... we know they're meant to be together. It's a fine old Enchanted Forest custom, after all.

Snow is fighting with Cora (who's doing this really creepy whistle thing - wtf is that about?). Cora attempts to rip out Snow's heart, but Emma jumps in front of her and gets Cora's hand through her chest instead. 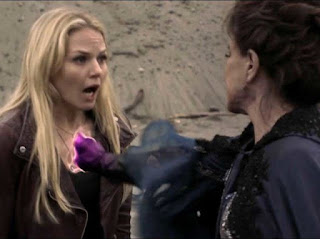 Only Cora can't rip out her heart. Instead a blinding light throws Cora on her back and Snow and Emma jump for the portal.

Meanwhile, in Storybrooke, Red tries to stop Gold and Regina and ends up getting jack-smacked for it. Henry pleads with Regina not to do this, to have faith, Regina finally decides to listen to him, and she deactivates the portal. A moment later, we see a hand come over the edge of the well and it's Emma, followed by Snow. They thank Regina, and then Snow runs off to kiss her prince awake.

Emma confronts Gold, who thinks she's there because she's mad about him trying to rig the portal, but she's really pissed about the scroll. She realizes that he must've planted the scroll there, knowing that she'd need it exactly when she did. He's been pulling all the strings all along.

"I created the curse, but I didn't create you," he tells her. "I merely took advantage of what you are: the product of true love. That's why you're powerful."

And so we learn that Emma is much more than she seems, with latent abilities that even Rumplestiltskin, the Dark One, is in awe of. Emma has magic, and it's clear she doesn't know how to feel about that.

Over on the shores of Lake Nostos, Hook is coming around and Cora's pretty pissed, until Hook shows her the dried-up bean that he took from the giant. In the waters of the lake, it'll be regenerated, and they now have a way to Storybrooke. 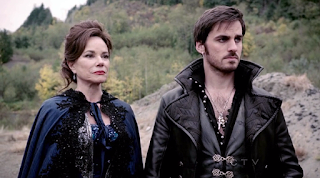 And in Storybrooke, we see the whole gang rushing off to celebrate at Granny's - but of course, no one has extended an invitation to Regina, who stands alone and sad as Gold reminds her of that fact.


And off in the distance, just on the horizon, we see a pirate ship, with Hook and Cora aboard, and in their sights....

I'll give this one 5 hooks out of five.

This one had everything. Costumes to die for, Deliciously evil Cora, Brooding, dark, dashing and flirtatious Hook, and some slamming Regina moments.