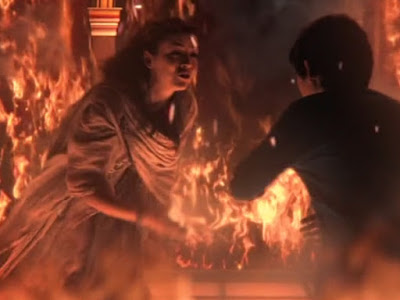 We begin tonight with a wet and steamy Captain Hook, and I must say, I'd be okay with beginning every single episode this way. DAYum.

He and Cora have a wonderful scene, in which she castigates him for letting Emma get away with the compass, reminding him that "he chose her." I remember the first time I saw this episode. I knew that line was prophetic. Or maybe I just really wanted it to be prophetic. Anyway, Cora gives him hell and leaves him, quite literally in the dirt for his betrayal, determined to go on without him.

Cora returns to her vault, where we see her pull out a heart that somehow activates a bunch of other hearts around it, and she utters a command: rise.

We watch an army of zombies (the bodies of the village she slaughtered) rise up, presumably to go after Emma, Snow and the girls.


Speaking of which....Aurora positively ID's Henry from Emma's picture. Snow explains the whole burning room sleeping curse thing, and reminds Emma that this is in fact, an awesome thing. They can communicate with Henry, and Henry can talk to Rumplestiltskin, who can find a way to get them home.

Aurora goes back to sleep, and lets Henry know that Emma and Snow are working on a plan. He wakes up and tells Regina and David that Snow and Emma are trying to get home, but there's someone in their way - and it's Cora. To say Regina looks less than thrilled is an extreme understatement.

She heads over to Granny's, where Mr. Gold and Belle are on a burger date.

Regina butts in and Gold gives her the cold shoulder until she drops Cora's name.

"She's on her way, and I don't think I need to remind you how most unpleasant that would be for both of us," she warns.

"I can handle Cora," he scoffs.

"There's a big difference this time," Regina reminds him, casting a look at Belle. "This time you have a weakness." Back in the Enchanted Forest, Mulan notices Aurora's burned arm and she gets pissed. She vowed to Philip that she'd protect Aurora and now she insists that they stop making her go in the burning room. Aurora refuses because she's been a pampered pretty princess this whole trip and is finally feeling useful.

In Storybrooke, meantime, Henry is ready to go back to sleep, insisting that he's tired of reading about heroes and wants to be one. Mr. Gold helps him get to sleep by telling him a hypnotic bedtime story that will impart the details that they need to hear on the other side.

He reminds Henry that once upon a time, Snow and Charming trapped him with the magic squid ink in Cinderella's quill, and he had his own supply, tucked away in the very cell where they had him imprisoned.

Henry tries to pass that along, but Aurora is yanked out of the burning room by Mulan, since they're under attack in the real world by Cora's zombies. The girls fight like badasses, but Mulan takes Aurora and cuts out in the thick of things. So much for being a stand-up girl. Unfortunately, the zombies take her down and by the time she gets things under control, they've nabbed Aurora and made off with her. 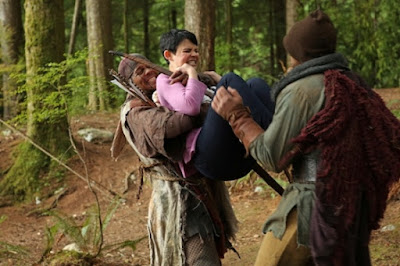 Henry awakens in Storybrooke and this time, he's seriously burned. Gold heals him and Regina and David refuse to send Henry back - until David remembers that Snow could be taking Aurora's place. He insists on being put under a sleeping curse so that he can take the message, and he's counting on Snow kissing him out of the curse.

In the Enchanted Forest, we see that Aurora is back in the zombie camp and down in the prison-hole. Cora comes to visit, offering her stew, which Aurora throws back at her. Cora mocks her when it becomes clear that she wants to go to Storybrooke, especially when she can still have her prince. It turns out there's a way to get a soul back from a wraith. She offers to tell Aurora if she cooperates. Aurora refuses and Cora knocks her out cold, then sends a bird to tell Snow they have until sundown to bring her the compass or Aurora is toast.

Mulan demands the compass.but reluctantly agrees to give Snow and Emma two hours to come up with a plan. Snow reminds them that Aurora isn't the only one who's been under a sleeping curse, and if they can get some of Mulan's sleeping powder, her sleep will be deep enough to get her to the burning room.

Our next scene features a full-on to the camera shot of Captain Hook calling me sweetheart and asking me to wake up.

Oh, wait...that's Aurora he's talking to. Sorry. Got lost in the fantasy for a moment.

Anyway, Hook is there to free Aurora, mostly to spite Cora and also so that she can deliver a message to Emma, letting her know there's no hard feelings and their deal still stands - he'll get the magic dust if she'll take him to Storybrooke.

Across the forest, Snow settles in for a return trip to the burning room, but first, she and Emma have a philosophical conversation about who's to blame for all of this. Snow points out that it doesn't really matter - blaming people won't get them home faster, but Emma has her mind locked down on one person: Regina. It's all Regina's fault, as far as she's concerned.

Which takes us over to Regina, who is cooking up a curse, with Henry looking on. He asks her if she's been using magic and she reassures him that she hasn't. She's really trying, and after this, she won't use it again.

Regina puts the curse on the needle of a spinning wheel, David hugs Henry one last time and Henry gives him the amulet to help him control the flames. Gold cautions David that he'll have to find the burning room - he won't be sent there immediately - before David pricks his finger and falls into the curse.

He awakens in a dark room with torches on the walls and figures out pretty quickly that the floor is scalding hot, ergo, the burning room is beneath him. He bashes his way through the floor with a torch and lands a few feet in front of Snow, who's in the room, calling out for Henry. 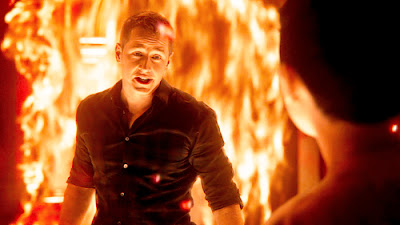 Snow is understandably upset when she realizes what David has done, and even more so when it's clear she cannot save him in there - their bodies merely pass through each other because they exist in different realms. David does manage to communicate Gold's message about the squid ink before Snow wakes up.

We flash over to Cora, who is confronting Hook over the absence of a certain princess. And oh, damn...she's pulling his shirt open and showing us that glorious hirsute chest...nnnnnnng. 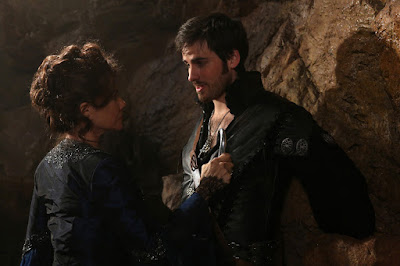 Hook directs her attention to his satchel, where he says he's got a gift for her. It turns out he's taken Aurora's heart (And mine! Scream thousands of women across the world) and now Aurora has a way to both influence and eavesdrop on her prey. She's impressed and agrees to partner up with him again.

Snow and Emma discover that Mulan (who is a backstabbing beyotch) has taken off with the compass. They manage to run her down, and Snow knocks her on her ass. Aurora shows up and communicates Hook's message to Emma, adding her own insight:  "I think he may care for you."

Her last few lines are given in tandem with Cora, who is holding her heart and using her to communicate - all the better to control the game. She has Aurora ask about their plan, and off they go.

And back in the cave, Cora again partners up with Hook and Hook gives us that devilish lip bite.

Lot's of steamy, sweetie-pie, sexy and sarcastic Hook, poor Snow and David, and Zombies!! This was my kinda episode.