Once Upon A Time - Season 2, Episode 7 Recap: Hungry Like The Wolf 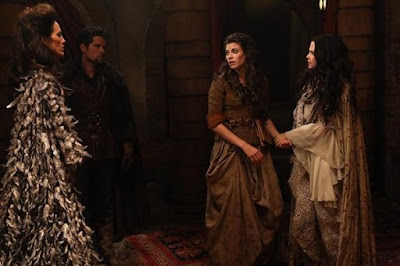 We begin in the mines with the magnificent seven where Grumpy has just busted through a wall with sheer grump-power and found a vein of magical diamonds that can be ground into fairy dust, putting David one step closer to getting to Snow and Emma via Jefferson's battered hat.

They all decide to celebrate over beers down at Granny's, and we see a really sweet interaction between Ruby and Billy (a.k.a. "Gus," a nod to my favorite mouse from Cinderella, "Gus Gus"). Billy asks Ruby out but she has to decline. Tonight is the first full moon since the curse broke and she can't be out and about. Granny has welded her a cage in the deep freezer, and despite David's protestation that she's harmless and he knows it, she locks herself inside.

David heads back out to finish his beer and into his booth slides King George - who is now the town DA, and he lets David know in ringing tones that he's challenging his authority. David isn't even sweating, giving as good as he gets. Which only pisses George off more, the steely-eyed bastard. Ooooh, what a good, shivering feeling.

Flashback to the Enchanted Forest, where Snow and Red are running from the royal guards. They manage to get away, but Red freaks out because her magical hood is torn. She's worried about Snow's safety under the circumstances and urges her to sleep someplace else for the night. They agree to meet up in the morning.

The next morning, Red awakens to find a strange, yet incredibly hunky man absconding with her cape. He threatens to burn it. They tussle and his eyes glow in a funky way, and he introduces himself as Quinn, a fellow werewolf. Furthermore, he tells her that she's only out of control because Granny is trying to keep her from being who she really is. There is a way to control the wolf within, and he can show her how.

He takes her to an underground wolf den where he introduces her to Anita - her own mother - whom she'd thought dead all these years. Mom is proud to be a wolf, and wants Red to be proud of it as well.

Forward to Storybrooke again, where a very dismayed Granny finds that her welded prison wasn't as escape-proof as she'd hoped. Ruby is out.

David and Granny find Ruby asleep in the forest, with no memory of having gotten out. She's terrified that she may have done something bad during her memory lapse, but David reassures her that everything is fine. He has to check out a report of an abandoned vehicle on their way back to town.

Down at the cannery, David finds an abandoned truck that happens to belong to Billy, and Ruby smells blood. They find his body ripped in half and Ruby freaks right the f**k out. David doesn't believe it's her. Red demands to be locked up in a jail cell, and the gathering crowd seems to agree.

David reluctantly locks her away, and in strolls George. He tells David that either he hands Ruby over to let the town decide her fate, or he tells the town that David is putting their lives in danger and there will be an uprising. David tells him to bring it and testosterone crackles in the air.

Meanwhile, in dreamland, Henry is stuck in the burning room, where we can clearly see someone on the other side. He awakens to find Regina by his bed and she freaks out when she sees the burn on his arm. She takes Henry to Mr. Gold for answers. He tells her that people who recover from a sleeping curse go to a nether world in their dreams sometimes. He can't keep Henry from going there, but he can give him an amulet that will help him control the flames.

We get a little glimpse of Gold's softer side here - he refuses any kind of payment, because it's for Henry, and we know that Gold has a soft spot for kids that remind him of his son.

Back again to the Enchanted Forest, where Anita tells Red that Granny stole her away from her mother and her people because she's ashamed of their wolf heritage. She tells Red not to suppress the wolf inside and embrace it instead - because that's the key to controlling it. Then she guides her through a directed meditation sort of thing and we see Red running free across the countryside sans cloak, happy and loving every minute of it, despite the inherent crappiness of the CGI.

It works. When Red comes to, she remembers all of her wolf-time, and she was in perfect control.

Forward to Storybrooke again, and George is whipping the crowd into a pitchfork and rifle-toting frenzy, leading them in a march to the police station.


David is too fast for them, though - he's moved Red to the library and chained her to the shelves. Granny warns them that the crowd is six blocks away - she can hear them.

"You have wolf hearing, too?" Belle asks.

"It's not all it's cracked up to be - especially when you own a hotel," Granny deadpans.

David is sure Ruby didn't kill Billy - and he's got an idea of who did. He takes Granny and off they go.

Flashback to the Enchanted Forest again, and Quinn awakens, thinking soldiers are infiltrating the den. Instead he grabs Snow, who came looking for Red. Anita is not very friendly, and when Snow asks Red to leave, Red refuses. She's found her home and her mother. Snow understands and wishes her friend well.

Unfortunately, the queen's guards followed Snow and they arrive on the scene, killing Quinn in the process. The wolves deal with them, but Anita blames Snow and orders her tied up so they can feast on her once the moon rises. She orders Red to kill her and prove her loyalty.

Red balks, and intervenes when Anita changes into a bad CGI dog and goes after Snow, She knocks Anita away, and right onto a pike that is mysteriously sticking straight up from the floor. Geez. Somebody ought to see about that.

In Storybrooke, Red is cautioning Belle to stay away, but Belle refuses. She tells her she can see the good in her, just like David does.

"Trust me," she tells Ruby, "I'm sort of an expert when it comes to rehabilitation."

Ruby chains Belle to the shelves and takes off, intent on giving herself to the mob.

On the other side of town, David is using Granny's nose and together they find Ruby's cloak in the trunk of a car - a car belonging to George.

They hear Ruby howl in the distance and know that she's out. George and the mob have her cornered, and Granny shows up, crossbow in hand and stops the mob. David gets in front of them and tells them George is the real killer and that Ruby is just scared. He cautiously makes his way over to the badly-animated-in-a-middle-school-classroom wolf and puts the cloak around her, bringing her back to human (and fully-clothed, go figure).

George, meanwhile, has knocked Granny to the ground (And how the hell did that happen? She can kick his ass any day of the week) and he's taken off. Ruby leads David to where George is hiding out in the open on the beach, right next to a fire. George only wanted to see David's face as he tosses Jefferson's hat onto the fire and it goes up in flames.

David is devastated and pulls the gun on George (and oooooh, Josh Dallas - you gave me chills with that moment).

But even with George taunting him, David still won't pull the trigger, because he's too good of a guy.

We see him talking to Red as they look in on a sleeping Henry, and he despairs over how he's going to tell Henry that he'll never see his mother or grandmother again. Red reminds him that there are other ways to cross realms, and she knows that David will never give up until he finds a way to do it. And then she takes off in a happy wolfy run.

We end the episode with Emma and Snow over in the present-day Enchanted Forest, who are watching over a sleeping Aurora. We go into Aurora's dream and see that she's in the burning room with Henry just before she wakes up. She tells Snow and Emma about the little boy and that he gave her his name...Henry. Snow and Emma look at each other, totally gobsmacked.

I'm going to give this one five crescent moons out of five.

We had George being a steely-eyed bastard, another hunk of single-episode mancandy, Granny kicking ass and taking names, Charming channeling his inner badass, and a mob with torches and pitchforks. Pitchforks. I still can't get over it. They actually went there.