Once Upon A Time - Season 2, Episode 6 Recap: "You Never Forget Your First" 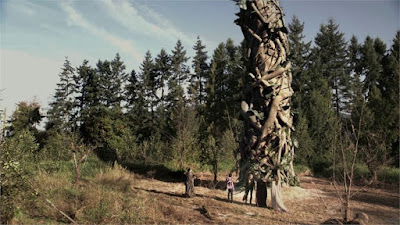 We get a teaser of an opening tonight, reminding us of not only what happened last week, but a conversation held long ago between Regina and Emma.

"Your longest stint anywhere was two years. What did you enjoy so much about Tallhassee?" Regina asks.

And if you're seeing that line on a second (or seventy-eighth) viewing, it hits you right in the feels because you know what Emma was hanging around for.

Damn. Got a lump in my throat.

So....on to the episode. And I'm going to begin by telling you that this very episode marks the beginning of my obsession with this show. I hadn't ever watched it before, and happened upon it one bored evening, saw this episode, and it was all over for me.

Not only did they have a man who made my ovaries pop like popcorn, the premise was intriguing as hell, the dialogue was snappy and heartfelt, and I had to have more. More. MOAR!!!

And now I'm four seasons in, knee-deep in fanfics and recaps and holy cow, I still love this damn show. It might frustrate occasionally, but I still love it. Now back to our recap.


Our girl power cadre is at the foot of the beanstalk, Hook tells them the story of it as he's heard it. Jack and his men fought a terrible war with the giants over the magic portal-creating beans. The giants slaughtered them all, and one giant remains, guarding the magical treasure room. The compass they seek is in it. Unfortunately, the beanstalk is enchanted but he has two magic wristbands that Cora gave him that can counteract it the enchantment. He'll go up with whoever wants to volunteer.

And now we flashback to Portland, Oregon, eleven years ago, and a young-dressing bespectacled Emma is stealing that iconic yellow VW bug. A man suddenly sits up in the seat, and we see it's our mystery guy from the season opener, the one who got the post card telling him the curse was broken. He introduces himself as Neal Cassady, and while flirting (and successfully dodging a policeman), we learn that he stole the bug in the first place and Emma was stealing a stolen car. 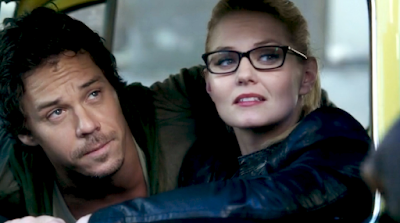 Ladies and Gentlemen, Neal Cassady has just entered the building. And the juxtaposition between his story with Emma, and Emma's story with Hook will play throughout this episode, to great effect.

Forward again to our friends at the beanstalk. Mulan is insisting it's going to be her climbing, but Emma insists on accompanying Hook and refuses to take no for an answer. Mulan gives her a powder made from magical poppies that will put the giant to sleep. Emma pulls Mulan aside and tells her that if she's not back in ten hours, she is to cut the beanstalk down and get Snow home.

Emma and Hook take off to climb the beanstalk. "You never forget your first," Hook tells her, in somewhat of a foreshadow even though he's referring to a beanstalk. He tries to get Emma to open up, but she balks. He can read her too well, though. Having lived in Neverland, he knows the look of someone who's been left alone too long. He asks her if she's ever really been in love and she answers "No. I have never been in love."

Back again to Portland eleven years ago, and Neal is patting Emma's swollen belly, which, it turns out, is her purse shoved under her shirt, and they've been robbing a little mini mart for today's food. Neal also stole her a keychain. Ahhh, young love. They then sneak into a hotel after a family checks out early, and share a serious moment about the direction their lives are going.

Neal suggests they get a real home, maybe hang up the dream-catcher they just found. Emma responds with "Like where? Neverland?" (SPOILER! LOOK AWAY!! How did Neal not bat an eye over that line? )

Neal pulls out a cheesy map of the hotel chain's locations and tells Emma to close her eyes and pick their forever home, and her finger lands on Tallahassee. They kiss with a whole lot of tenderness and seal the deal.

Forward to the present-day Enchanted Forest where Aurora refuses to rest. It turns out the sleeping curse has a side-effect of horribly bad dreams. Snow talks about how David used to light a candle for her when she awoke from one.

We reach the top of the beanstalk with Hook and Emma, who has managed to cut her hand. Hook firmly insists on bandaging her hand, dousing it with rum and then causing a tsunami in my panties by tying the damn thing off with his mouth. HIS MOUTH.


Emma notices Hook's "Milah" tattoo, correctly guessing that Rumple killed Hooks true love, and in a moment of empathy she confesses that she was maybe in love...once.

Flashback again to Portland, where Neal shows Emma a wanted poster from the post office. He was a janitor for a time in Phoenix and stole some very expensive watches. He's got the watches stashed in a locker at the bus station in Portland, but he's got to move to Canada to get away from the FBI watch list.

Emma suggests they buy a clean VIN number and fake some passports and ID's and still go to Tallahassee. She's going to get the watches out of the locker so they can sell them and get the money to start over fresh and legit. They admit their love for each other.

Hook and Emma, meanwhile, are taking on a very angry giant (and yet another former LOST alum). They manage to smack him with the sleeping powder, and Hook exclaims what we all knew from the moment they came within an inch of each other: they make a good team.

They make their way through the treasure room, and Emma stops Hook from tripping a string that would have activated a trap by wrapping her arms around him. He takes it entirely the wrong way.

Emma reminds him that they have a job to do, and they find the skeleton of Jack, complete with his autographed sword, which, it turns out, is poisoned.

Down on the ground below, Mulan is marking the time and Aurora is being comforted by Snow, who tells her that the burning red room she's dreamed about is common to all those who've endured a sleeping curse. Aurora tells her there was someone else in her room, but she couldn't see who he was.

Flashing back to Portland, Emma has successfully gotten the watches, and with a smile and an overjoyed whisper of "Tallahassee," she and Neal make plans to meet later, after Neal's sold off the goods. He gives her one of the stolen watches so she can keep track of time.

Unfortunately, Neal is being followed. He dodges whoever it is for a while, but eventually, he gets slammed to the pavement by a man who asks him if he wants to protect Emma. Neal turns over to see...August!!!

August tells Neal he was in the same home with Emma, and he's promised to take care of her. In order to do that, Neal has to leave her to her destiny. He asks Neal if he believes in magic, and says he's going to show him something that will make Neal believe every word he says.

He lifts the lid on his typewriter case, Neal goes white, and then he agrees to listen. August tells Neal about the curse and Emma's destiny.

Emma, meanwhile, is still waiting for Neal, and suddenly his cellphone is out of service. She's apprehended by the cops, who tell her that Neal not only took off, he called in a tip and set her up to take the fall. 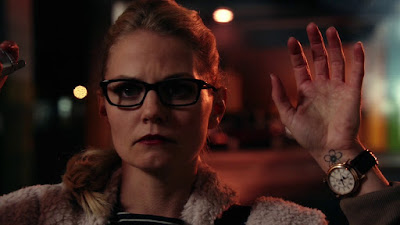 She's got one of the watches on her, so it's pretty much an ironclad case. She's cuffed and carted away, heartbroken.

A few months later, Neal is talking to August. He's visibly upset that Emma's in prison. He gives August a large amount of cash and the keys to a now-cleanly VIN'd bug. August agrees to see that she gets it all. Neal asks him to let him know if anything changes, and August agrees to send him a postcard if and when it does.

Forward to the top of the beanstalk, where Hook tries to win Emma's trust, but the giant awakens, sending treasure and pieces of ceiling raining down all around them. Hook is trapped in the rubble, and Emma is squeezed to within an inch of her life.

The giant, as Emma discovers, is just a misunderstood soul. He and his family were attacked by humans, and he considers them all to be murderers. Emma bites his hand, forcing him to drop her, but when he chases after her, he gets caught in his own trap. After a heart-to-heart with Emma - who admits that they might both be wrong about each other - he decides to help her, giving her the compass and agreeing to do another favor for her before allowing her to leave.

Emma helps Hook out of his pile of rubble and he proclaims her to be "bloody brilliant" in that crisp, panty-steaming Shakespearean enunciation of his. She manacles him to the rubble (with the magic appearing manacle of...magic), and he pleads with her not to do this. She can't quite meet his eyes as she double-crosses him. The giant will keep Hook there while Emma gets a head start, and he shouts her name angrily as she makes her getaway.

Down below, Mulan is getting ready to hack the beanstalk down, only to get flattened by Mama Bear Snow, who won't let her do it. Emma breaks up the fight and Snow reads her the riot act. They go back together, and that's that. Snow didn't follow her ass through a portal-spinning hat just to leave her there.

Back eleven years again, and we see a very young and very numb looking Emma in her jail cell receiving an envelope from Phuket containing car keys and nothing else. The guard congratulates her on her pregnancy as Emma holds a pregnancy test stick in her hand.

Forward to Storybrooke, where Henry wakes up from a horrible nightmare - he too, was in the burning red room (having survived a sleeping curse). David lights a candle for him as Henry tells him he wasn't alone in the room. Someone was there, and she was staring at him.

I give this one five hooks out of five.

My nostalgia for this episode might run deep, but it's well-deserved. This episode filled in a lot of the blanks, and established a love triangle that can only lead to lots of wonderful, toe-curling tension that builds relationships.